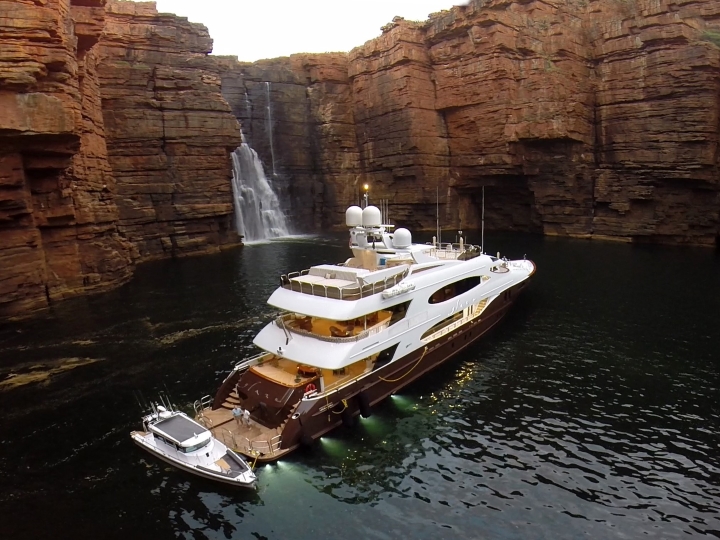 The trip by the 50-metre superyacht Glaze took 12 months to prepare and was “an unforgettable and life changing experience”.

A journey to explore Australia’s rugged Kimberley coast is among three such explorations nominated for the Voyager’s Award at next months’s World Superyacht Awards.

The Kimberley trip by the 50-metre superyacht Glaze, worth an estimated $50 million, took 12 months to prepare and plan and was “an unforgettable and life changing experience”, said skipper Carl Brandes.

Brandes, an Australian-born adventurer and photographer, has led numerous previous expeditions to the Kimberley region and has also captained superyachts during exploration trips to the South Pacific and Mediterranean.

“The impenetrable coastline, its unforgiving deserts, extreme tides and the merciless heat make this beautiful and untouched region so unique and interesting to visit,” he says.

“Travelling to the Kimberley is a true adventure and with constantly changing conditions and inaccurate maps all but the most experienced explorers need to proceed. There are fewer people per kilometre than almost anywhere else on the planet. That’s the attraction of one of Australia’s last frontiers.” According to the Superyacht Australia website, the crew spent hours researching routes, access points and local highlights. “We were very fortunate and actually overwhelmed by the support of the local community in planning this journey,” Brandes says. “We also had great support from government and national park authorities and could not have done it without them. There is so much cruising potential in the Kimberley region, I can only recommend a trip there.”

The World Superyacht Awards will be presented in Florence on May 13. The Voyager’s Award celebrates owners that have made extensive use of their yachts in long distance voyaging and exploration over the past few years.

Says the charterworld.com website: “The Voyager’s Award recognises not only yachts that have accomplished rugged voyages to high latitudes, but also welcomes nominations from owners who have cruised to areas rarely visited, explored new vistas in popular areas and cruises which incorporate interesting and perhaps educational adventures for children.” The superyacht Glaze was built in 2007 by US-based Trinity Yachts and commissioned the Lady Michelle, cruising US, Caribbean and Mediterranean waters until a change of ownership and name in 2013. It can accommodate 12 guests and nine staff and includes a jacuzzi, wet bar, grill and al fresco dining area. Inside, a stunning spiral staircase connects a ‘skylounge’ featuring a surround sound theatre system, a media room, and six cabins including a master suite and a VIP guest stateroom. Interior surfaces include hand-finished Makore and Anegre hardwood, and Bianco Scintillante and Azul Macauba marble.

Superyacht Australia CEO MaryAnne Edwards welcomed Glaze’s nomination for the Voyager’s Award. “It shows how diversified our country is and how much potential it holds for superyachts to come and visit our unique, safe and uncrowded coastlines,” she says.

“We are working hard to attract more yachts to cruise in Australia and we are excited for the future and the positive economic impact superyachts will have on local communities.”