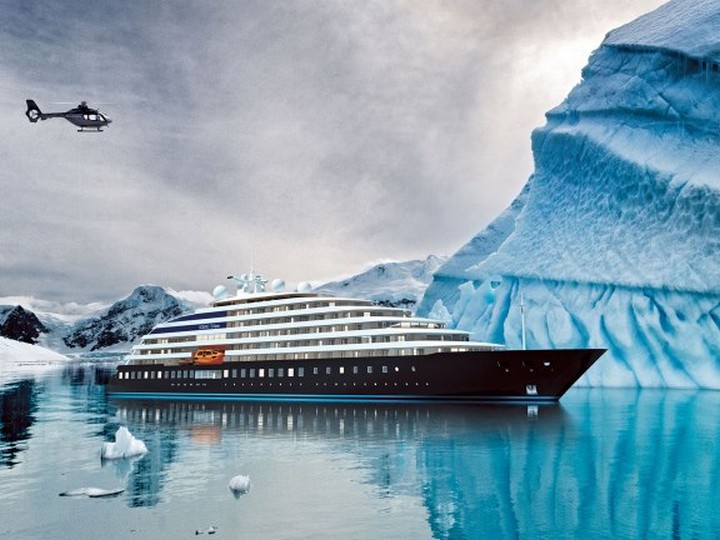 Exploring the most remote places on earth is about to get seriously upscale thank to new luxury cruise ships that are putting adventure first.

Calling all Amundsen, Scott, and Shackleton wannabes. Exploring the most remote places on earth — from the equatorial rainforests to the polar extremes — is about to get seriously upscale thank to a host of new luxury cruise ships that are putting adventure first.

Combining top amenities and luxurious staterooms with once-in-a-lifetime explorations to far-flung destinations like Antarctica, the Amazon, and the Arctic, this emerging fleet of ships is charting territory once reserved for only hard-core explorers. Here, we tour six custom-built expedition vessels that will soon be taking adventure cruising to new extremes. Helicopters and submarines and Zodiacs, oh my! The 228-passenger Scenic Eclipse, launching in 2018 from the Australia-based Scenic Luxury Cruises and Tours, will carry all these and more. Billed as the world’s first discovery yacht—and the line’s first ocean-going ship — the ultra-luxury, all-suite, all-balcony vessel will feature two helicopters, a seven-passenger submarine, 12 Zodiacs, and kayaks, snowshoes, and e-bikes for exploration. Indulgences are in excess as well, with amenities like personal butlers, six dining rooms, and a 465-square-metre spa. With the launch of its new 200-passenger all-suite Crystal Endeavor, the California-based Crystal Cruises is setting out to prove that bigger can be better when it comes to the high seas. Upon completion in 2019, the 600-foot-long ship will be the largest megayacht afloat, featuring spacious suites that range from 37-square-metre staterooms to the 290-square-metre Owner’s Suite. Designed to access remote locations, the first Explorers ships, Le Lapérouse and Le Champlain, will debut in 2018; Le Bougainville and Le Dumont-d’Urville will arrive in 2019. Each will take passengers to new and unexpected destinations like the Amazon, Papua New Guinea, the Orinoco, and the Bissagos Islands. German company Hapag-Lloyd is upping the ante for intrepid travellers to the North and South Poles with the debut of the luxury expedition ship Hanseatic Inspiration. The vessel will feature extendible glass balconies, giving passengers the unique feeling of floating over the polar water. Debuting in 2019, the 230-passenger Polar Class 6 ship — which will sail the Amazon in addition to the Poles — will be notable for more than just its ocean views, featuring an “inspired-by-nature” interior design, cutting-edge environmental technology, and a fleet of e-Zodiacs that will enable landings in even the most remote areas. Not all new expedition ships are new builds. Ultra-luxe Silversea Cruises is converting its Silver Cloud into the Silver Cloud Expedition, an ice-strengthened luxury vessel for launch in November 2017. Taking no more than 200 passengers at a time to the polar regions, the revamped ship will have one of the highest crew-to-guest ratios (roughly one-to-one) in expedition cruising. It will also boast 16 Zodiacs, a new observation lounge, butler service, 19 onboard experts, and the only Relais & Châteaux restaurant in Antarctica. Talk about cool exploration tools. Lindblad Expeditions’ 100-passenger National Geographic Venture will boast an ocean-full, as befits the two legendary expedition companies partnered on this ship. Launching in 2018, this coastal vessel will be tailored to watch wildlife and reach remote waterways, with such toys and tenders as glass-bottom boats, Zodiacs, kayaks, expedition landing craft, and a remotely operated underwater vehicle. Passengers will also have access to a video microscope (which magnifies and projects undersea life onto high-definition screens), a hydrophone (allowing users to listen to marine mammals from above waver), and underwater cameras. A second, similarly-outfitted open-ocean ship will also debut in 2019.