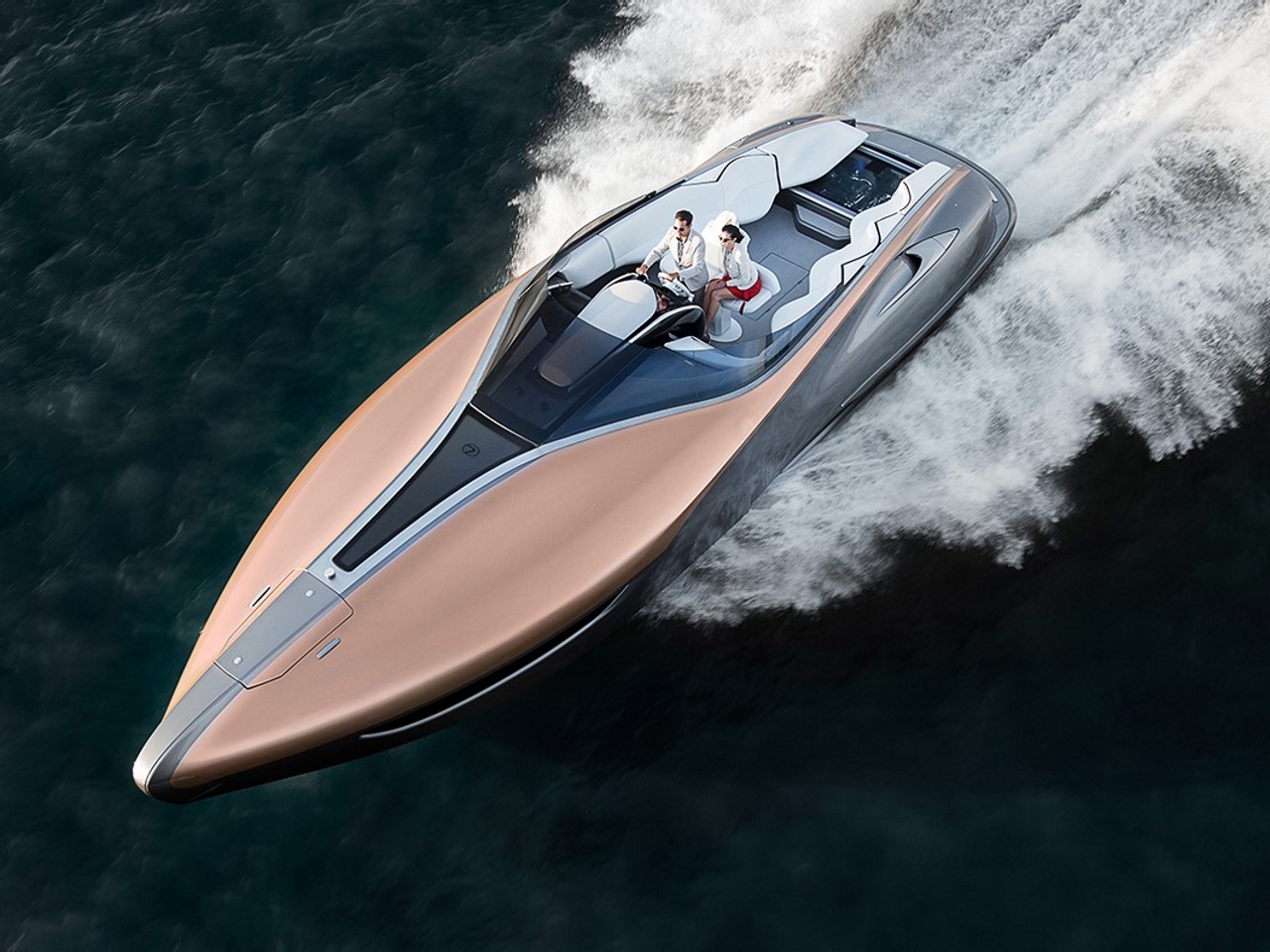 If your favourite car was a yacht, it would look like this

Lexus, Mercedes-Benz and Aston Martin did more than just lend their brand names or model monikers.

When it introduced the Sport Yacht earlier this year, Lexus joined two other luxury auto brands in the boating world: Mercedes-Benz and Aston Martin.

For the Lexus Sport Yacht, the Silver Arrows Marine Arrow460-Granturismo, and the Quintessence Yachts Aston Martin AM37, the carmakers did more than just lend their brand names or model monikers to the motor yachts.

Lexus designed the Sport Yacht in-house and worked closely with Marquis Yachts on the build. Likewise, Aston-Martin was deeply involved in the development of the AM37. “The project was more detailed and intensive than anything we’d ever done,” says Katia Bassi, the managing director of Aston Martin’s AM Brands. “But we had to ensure the beauty and ideal proportions our design team is obsessed with was designed into the boat.”

The motor yacht from Monaco-based Silver Arrows Marine, which takes its name from the nickname first given to Mercedes-Benz racecars in the 1930s, began as a concept created by Mercedes-Benz Style. “Much of their design language, including their cars’ convex shapes and curves, had never been on a yacht,” says Paolo Bonaveri, the global marketing and communication director for Silver Arrows. “We even incorporated the ‘beauty line’ of the Mercedes S-Class Coupe along the hull line.”

While the Lexus Sport Yacht is just a one-off build (though there were rumours about another yacht project in the works), the Arrow460-Granturismo and the AM37 have already moved into production. Toyota Motor Corporation president Akio Toyoda arrived at a Miami Beach waterfront mansion earlier this year piloting the new Lexus Sport Yacht, a 42-foot one-off concept. It was fitting that Toyoda, who is also the chief branding officer for Lexus, was at the helm for the boat’s debut. He authorised the project two years ago to promote Lexus, Toyota’s luxury-car division, as a lifestyle and recreation brand, not just a car brand. The boat was styled by Lexus designers, engineered by the Toyota Marine Department, and built by Marquis Yachts of Pulaski, Wisc. The design features flowing lines, an open stern, and a forefoot that evokes the head of a shark and was inspired by Lexus’s LFA supercar. - Michael Verdon Introduced at the Monaco Yacht Show in September 2015, the Quintessence Yachts Aston Martin AM37 represents a collaboration between the newly established Dutch boatbuilding brand and the long-established British automaker. With input from Aston Martin, the boat was designed by Mulder Design, a Dutch firm for naval architecture, engineering, and design whose portfolio includes — in a coincidental connection to Aston Martin and its association with James Bond — the superyachts Octopussy, The World Is Not Enough, and Moonraker. Plans call for the AM37 to feature a high-tech composite hull, carbon-fibre structural components, an interactive voice-control system, and a high-definition touchscreen for controlling navigation and multimedia functions.

Two variants of the boat will be offered: the standard AM37 (which Quintessence describes as “a gran turismo leisure powerboat”) that can reach speeds of about 44 knots, and the AM37S with a top speed of 52 knots. (quintessenceyachts.com) - Larry Bean Developed in partnership with Mercedes-Benz Style and built by Monaco-based Silver Arrows Marine, the Silver Arrows Marine Arrow460-Granturismo is a yacht unlike any other. The 46-foot cruiser — which debuted last year — mirrors the sinewy, seductive silhouette of a supercar, making it a natural choice for those looking for a boat as edgy as their S-Class. Prospective buyers will now have the opportunity to view the yacht in person during the Granturismo Experience. Kicking off in Monte Carlo this year, each daylong experience gives would-be purchasers a taste of what it means to own an Arrow460-Granturismo. After completing the tour—which includes portions by land in Mercedes-Benz cars and by sea on the yacht—interested guests can order a yacht of their own. (silverarrowsmarine.com) - Rebekah Bell