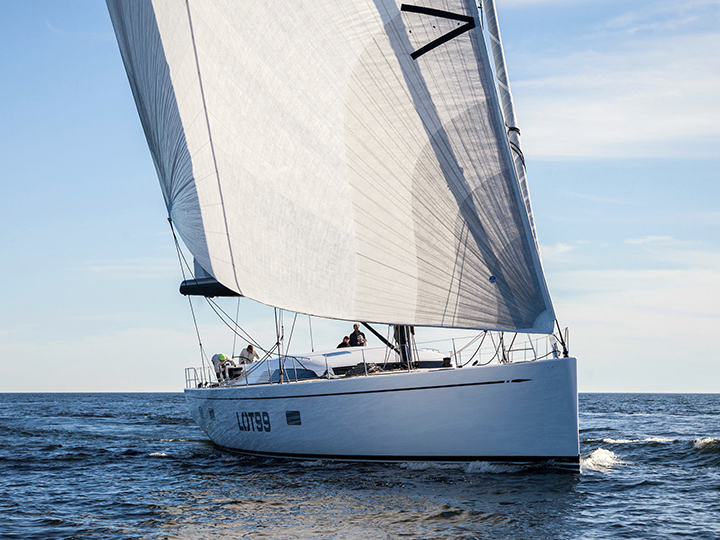 Five sailing yachts we loved from the Monaco Boat Show

Five sailing superyachts stood out among the many stately motor yachts at the 2017 Monaco Yacht Show.

Of the 100-plus superyachts gathered in Monte-Carlo’s Port Hercules for the 2017 Monaco Yacht Show, five sailing superyachts stood out among the many stately motor yachts. Considered a banner show, with visitors from all over the world coming to see yachting’s finest collection of motor yachts, sailing yachts, tenders, and toys, here are the five sailing yachts we loved from the 2017 Monaco Yacht Show. Visiting a superyacht with an owner onboard is a rare experience. Seeing one who just took delivery of his new baby is a singular event. When several writers stepped aboard the new 197-foot Seven by Perini Navi at the Monaco Yacht Show, the shipyard rep shooed us through the main saloon, where owner Ennio Doris was talking excitedly in Italian into his cell phone, thrilled with his new yacht. He was actually beaming.

Doris had good reason. Seven was one of the largest sailing superyachts at the Monaco show and the third launch in Perini’s 60-metre series behind Seahawk and Perseus 3, all with naval architecture by Ron Holland. The ketch-rig yacht is designed for racing and long-distance cruising with a main mast height of 63 metres from the keel to the top, and a total sail area of more than 2,000 square metres. It’s hard to imagine that kind of sail acreage, and the amount of power the sails generate under full load. While racing, the yacht heels over by as much as 30 degrees. While cruising the sideways slope is a gentler 15 degrees. What is even more impressive is that, instead of a large crew hoisting and lowering sails, most of the hard work is automated, done by pushing buttons on the all-glass helm screens and maneuvering joysticks. Belowdecks, hydraulic drums the size of life rafts furl and trim sails much faster than any crew could. Technically, Seven is one of the most advanced sailing superyachts ever built.

Seven is also a beautiful cruising yacht. The interior by Dante O. Benini & Partners Architects is subtle and elegant, defined by light-colored sycamore woodwork and Armani Casa decor. With six staterooms, including two master suites, the owner will be able to accommodate his seven grandchildren (hence, the yacht’s name) and their families on his yacht. Seven has excellent headroom and natural light throughout. Several teak dining tables in the cockpit beneath the flybridge allow for outside gatherings and alfresco, family-style meals. “With this new yacht, our family can all sail together, a passion that unites us and brings us together often,” says Doris. The enormous open teak deck on Tango, Wally’s fourth Wallycento launch, goes beyond the Italian builder’s usual striking aesthetics. The 100-footer was designed, as Wally founder Luca Bassani put it, to be “a boat that can deliver results in races, but also provides good comfort while cruising.”

Tango can have it both ways. Mark Mills, who has designed many successful sailing raceboats, used the lightest and most advanced build materials, like carbon fibre and nomex sandwich core, to create a vessel weighing only 52 tons, a featherweight compared to most cruising yachts the same size. Mills mandated that Tango have raceboat features like a sloped foredeck, raked rigging system, and lightweight titanium components. During the yacht’s first race, Tango reached a highly impressive 26 knots. At the same time, Pininfarina, designer of many famed Ferrari racecars, did the interior, using light fabrics, chevron-shaped motifs, and a stunning carbon-fibre stairway from the cockpit to the inner saloon. The Pininfarina interior has three staterooms, including a large master suite, and quarters for two to four crew. Tango can be raced with as many as 21 sailors, but Mills says 12 can sail the yacht comfortably. “She should do very well on the superyacht racing circuit,” Mills said at the Monaco Yacht Show. “We saved every ounce we could on her so she’d be fast, very fast.” Lot99 is the first yacht in new 95 series from Nautor’s Swan. Making its public debut at Monaco, the yacht has the same classic, elegant lines as most of the German Frers designs that have defined the Swan family since 1984. The yacht’s owners are longtime sailors who worked with the builder’s design team to ensure the new Swan was a racing and cruising vessel. The hull and deck were built with carbon-sandwich construction for maximum stiffness and minimal weight, using the same materials on most raceboats. Lot99’s 5.5-metre keel makes it a great ocean cruiser and, when retracted to 3.5 metres, provides access to shallower harbors. This keel, paired with a lighter ballast bulb, bowsprit, and square-top fractional rig, turns Lot99 into a fearsome Maxi racing sailboat.

The raised-pilothouse interior delivers exceptional views of the ocean and a sense of light and space that are sometimes lacking on sailing superyachts. The owner’s suite is at the stern, where the beam is widest, while two other guest cabins are amidships. The interior’s flawless woodwork is Swan’s trademark, and has kept the Finnish yard among the most elite sailboat makers for more than 40 years. The world’s largest carbon-fibre sloop, the 175-foot Pink Gin VI is the sixth yacht Baltic has built for the same owner, Hans Georg Näder. Designed for racing and cruising, the Finnish-built Pink Gin VI can reach sailing speeds of 30 knots, hyperspeed for a sailing yacht this size. Its 67-metre-high rig can carry 1,322 square metres of upwind sail and the yacht has a special tail sail plan for strong performance in moderate and light-wind conditions. Beyond the yacht’s sailing prowess, Pink Gin VI is the ultimate cruising machine, with a three-cockpit layout, sizable swim platform, two foldout balconies, and five staterooms. The Design Unlimited interior is arguably one of the most eclectic on the water, boasting a purple player piano with 8,600-year-old bog-oak keys, pewter furniture, and Baccarat chandeliers. The coolest, but least visible feature: Its massive keel bulb is painted to look like a shark smoking a Cuban cigar. The SW96 Sorceress is a breakthrough yacht for Southern Wind. Farr Yacht Design gave it a new style that incorporates the performance features of the world’s fastest racing superyachts. A wider transom, twin rudders, expanded sail area, and greater stability were designed into the SW96 for racing, along with a prepreg and Nomex deck to make the yacht as light as possible. Sorceress also has an exceptionally light-filled, spacious interior for cruising. Massimo Gino of Nauta Design said the interior was tricky because he had very limited space. “We had not inches, but hundredths of an inch to work with, to meet the owner’s brief,” he says. In the end, he created a beautiful, contemporary look, with a huge, open-plan saloon that offers sweeping views of the sea through large hull port lights.