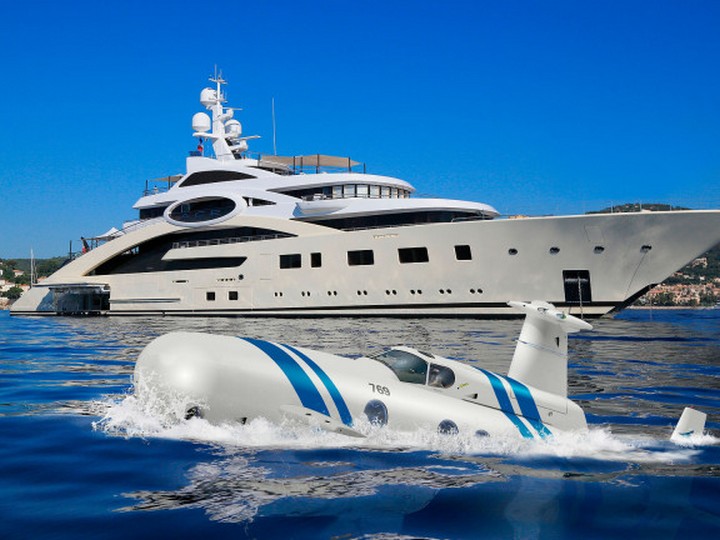 Five of the best personal submarines on the market

After years of sitting on the fringes, personal submarines are finally becoming mainstream.

After years of sitting on the fringes of the yachting industry, personal submarines are finally becoming mainstream. Four sub manufacturers have been refining their designs for years, either as research vessels or the ultimate superyacht toy, while a fifth is building a breakthrough design with an interior like a luxury business jet. Aston Martin’s announcement at the Monaco Yacht Show that it would develop a James Bond–calibre submersible was just another indication that these ocean explorers have moved well beyond sci-fi into the real world of luxury underwater vehicles.

Here are five of the coolest deep divers. Aston Martin is creating a new underwater god. Partnering with Triton Submarines, the British carmaker revealed a fresh take on personal subs at the Monaco Yacht Show. Triton has many decades of successful designs, including its flagship 3300/3, capable of descending 1,005 metre. It was the first sub to encounter a giant squid in the deep blue. Neptune will be sleeker, faster, and infinitely more luxurious. The Aston Martin interior will be less research vessel, more bespoke luxury car. Expect the same detailing and craftsmanship as Aston Martin’s Vanquish in Neptune’s hand-stitched leather seats or helm console. The limited-edition sub will be released at next year’s Monaco show. The Aurora 6, which can carry five passengers and reach of 1,005 metres, has six 7 kW motors that offer exceptional maneuverability along the same lines as a multi-engine drone. Seamagine also designed smart ergonomics into the air-conditioned cockpit, making the rear seats higher than the front so everyone gets an unobstructed view. It also included stairs for easy access rather than having to climb through an overhead hatch. Removing the hatch and the side pontoons delivers clear sight lines through the Aurora 6’s vast acrylic sphere. Prices start at US$3.7 ($A4.8) million and will vary according to the maximum depth rating. DeepFlight’s 16-foot-long Dragon is the smallest and most streamlined submersible on the market. Straight out of a Star Wars movie, the two-person Dragon does not rely on ballast (using water to descend), but flies beneath the surface, down to 100 metres, using an electric motor powered by lithium batteries. The signature is so whisper-silent that Dragon can approach large marine mammals without spooking them, while its rotating fans let it hover above reefs or wrecks. Dive times can last six hours. Given its compact size, the Dragon promises to become standard equipment on smaller superyachts. DeepFlight is now working with Princess Yachts to fit a Dragon in the tender garage of a new 131-foot Princess 40M. The Cruise Sub 7 1140 by U-Boat Worx is the deepest diver among the group. The seven-person sub can descend to 1,140 metres, a deep-sea experience akin to floating in space. The air-conditioned U-Boat has two back-to-back acrylic spheres, with three passengers facing forward and three backward. Seats are mounted on revolving platforms, so everybody can reposition themselves to enjoy the same views of the underwater world. U-Boat’s flagship model also has eight thrusters: four vectored horizontal thrusters, two dedicated horizontal thrusters, and two dedicated vertical thrusters. This not only gives the Sub 7 turn-on-a-dime maneuverability but also gives it the kilowatts to navigate strong currents. The Sub 7 can operate up to 16 hours under water. After its launch next year, the 63-foot Neyk Luxury L-1 could well become the grand master of personal submarines. Capable of diving to 305 metres, its teardrop shape provides excellent hydrodynamics. The cockpit is modeled after a private jet, offering sonar, forward-looking cameras, night vision, and even radar. The scale of the interior is also a major breakthrough. With more than two metres of headroom, the Neyk can accommodate 12 guests. It also promises to have the same levels of fit and finish as the finest business jets. The Neyk will be powered by two electric motors for a near-silent signature. The dome has two vertical thrusters so the sub can hover over reefs or wrecks. The transparent dome in the nose cone, providing a clear view of the ocean floor, is another innovative feature on a very exciting design.