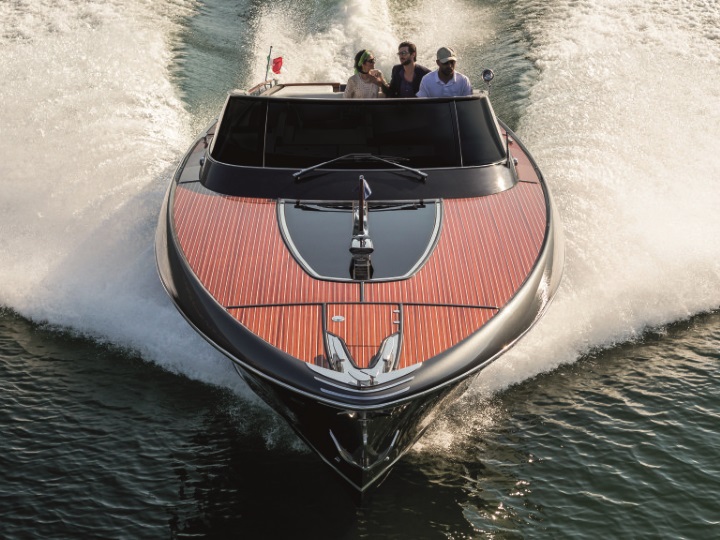 Eight of the most beautiful day boats on the water

From the impossibly good-looking Rivamare to the high-tech Evo 43, here are eight of the most advanced and well-crafted boats availble.

Focusing on exterior amenities and big deck space, day boats have evolved from utilitarian vessels into a yacht class that maximises contact with the sea.

Choices range from the impossibly good-looking Rivamare to the high-tech Evo 43, with a fold-out stern that nearly doubles the deck space, to Technohull's stealth-looking Omega 41 RIB. Here are eight of the most advanced and well-crafted boats designed for making the most of days on the water. Azimut Yachts's recent launch of the Verve 40 created a whole new category of day boat, a centre-console style with a true yacht interior. With its triple 260kW Mercury Verado engines, the Verve not only reaches a top speed of 44 knots, but has excellent fuel economy, low emissions, and the ability to head into shallow waters that would be impossible for inboard engines.

The Verve is also a new take on the typical stark, utilitarian centre-console design. Instead of a couple of seats and a bare cockpit, the Verve is an outdoor playpen, with lounges on tracks that separate or come together, an electric folding table that converts to a sunbed, and a complete alfresco galley with twin barbecue, fridge, icemaker, and, thanks to the Italian heritage, a wine cooler.

A door at the stern swings open to reveal a mini-beach club. The weekender cabin is more yacht than fishboat, with exceptional wood joinery, 2.1-metre headroom, and a big stateroom. Add the Seakeeper stabilisers, 10 kW generator, and Raymarine all-glass helm, and you have a complete luxury day boat. The AM37 bears the "heart and soul" of the storied British sports-car brand, but it didn't start out that way. Aston Martin initially planned to do a nominal amount of design for Quintessence Yachts. The Aston Martin design team became so obsessed with imprinting its DNA into the AM37 that the yacht became a waterborne Aston Martin. Its subtle curves combine with an expanse of teak decks to create a signature look.

Twin 320kW MerCruiser engines, mated to its stepped hull, give it sports-car-like handling and speeds in excess of 40 knots. The hand-stitched, leather-covered steering wheel (sourced from the same supplier to Aston Martin) a touchscreen helm, and joystick steering show how Quintessence seamlessly blended technology and craftsmanship.

Its most impressive technical feature is the automated hardtop that emerges from the aft deck with the push of a button, turning the AM37 from an open-cockpit boat into one with weather protection. The iconic styling of the Chris-Craft 36 Launch includes a wide-open cockpit, three helm seats, and the builder's classic tumblehome. Chris-Craft launched an outboard version two years ago, and a new hardtop makes it the day boat of choice for sunny waters from Miami to Mallorca.

Details like perfect teak decks, intricate upholstery stitching, and a teak console in the cockpit distinguish this boat from competitors. The teak console has a fridge, icemaker, microwave, ceramic cooktop, and grill that transform the aft deck into a culinary centre — a good thing, because the boat is rated to carry up to 15 people.

On the bow, the two-person sunbed becomes a private haven while at anchor. The cabin turns the 36 from day boat into a fine weekender, with three berths and a head. With its triple 225kW Yamaha outboard engines, this gentlemanly looking Chris-Craft becomes a beast on the water. Riva is the undisputed king of day boats, tracing its heritage back to the 1950s, with Brigitte Bardot cruising the French Riviera in style on her mahogany Riva Florida and later Sean Connery in his Riva Rudy.

Since then, Riva has launched elegant day boats like the Iseo, Aquariva Super, and Rivarama. Last year, it upped its game with the Rivamare. The 39-foot (12m) boat's retro profile, sleek lines, and tumblehome make it, without question, the best-looking day boat on the water. Pinstriped mahogany on the bow, stainless grills along the hull sides, and even the chrome-plated horn are details that distinguish the intricate design behind the new Riva.

The cockpit is the perfect day-boat design, with three forward seats, a lounge, and mahogany table just behind. At the stern, two panels fold out electrically to become a large swim platform. That kind of technically advanced feature is typically found on much larger yachts. Ditto the joystick steering and touchscreen helm. The Rivamare is powered by twin 300kW Volvo engines that deliver a top speed of 40 knots.

The Rivamare can also transition from day boat to weekender with a cabin that includes a large galley, bathroom with separate shower stall, and an open area forward that converts into a queen-size berth. The new flagship yacht of the Dutch Wajer Yachts is one of the most graceful in this group. Its long sleek lines, open cockpit, and multiple-zoned topsides make it a pleasure palace for day cruising, with a cabin for weekending.

Beyond the classic good looks, the Wajer 55 has standout technical features like fenders that automatically pop out from the holders and inflate, with the push of a button. The hydraulic anchor on the bow also deploys automatically without ever having to leave the helm. An automated bimini also lifts into place from a recess in the aft seating.

The Wajer 55 has a very cool and highly technical swim platform at the stern that lifts and lowers for easy boarding. And lone among our day boats, the 55 has a garage with a 3-metre tender. Add the Raymarine all-glass touchscreen helm, a wraparound windshield that is 4 metres wide, and impeccable fit and finish, and the Wajer 55 becomes the king of day boats. Two years ago, one of the coolest day boats ever conceived hit the water. The Evo 43 was different, with a stealth look that included a vertical bow and open transom. But the big breakthrough was its Transformer-like stern, which opened outward to give 40 percent more deck space.

It even had a section of stairs at the rear that lifts up to 270 degrees, allowing for easy access to the cockpit from high docks. The Evo WA, a new walkaround version, has turned the foredeck into a usable area, with easy access, while the 43 retains its "XTension" foldout stern.

Twin Volvo 325kW IPS engines give a top speed of 40 knots, with a cruising speed of 32 knots. The Evo WA will do a tour around the Mediterranean this summer, but it will make its public debut at the Cannes Yachting Festival in September. Technohull's Omega 41 was recently reconfigured so it could hold three 300kW outboard engines. That much horsepower will give the rigid-hulled inflatable a top speed of 80 knots, with a cruise of 50 knots. The beauty of the Technohull line is that they are designed for high speeds in rough seas, providing an exceptional seaworthiness that few other day boats can match.

The Omega 41's go-anywhere hull is built with quad-axial fibreglass with a carbon-fibre weave and infused epoxy resin. Surrounded by Orca dtex tubes, the hull not only has excellent buoyancy but rides softly in big seas.

Technohull made sure to add the luxury component to the Omega 41, with a carbon-fibre hardtop, Burmese teak, sunning area in the bow, and spring-cushioned seats. Owners can choose the seating layout in the cockpit, while options like an outdoor galley are also possible.

The Greek builder will customise the interior to include a separate stateroom, galley, and head. The Omega 41 outboard version will make its first public appearance at the Cannes Yachting Festival. While still a concept, the new Bugatti Niniette 66 could well write a new chapter in day-boat design. A joint project between Bugatti and superyacht builder Palmer Johnson, Niniette's cockpit is unlike any other 66-foot (20m) yacht.

The designers incorporated a 6.4-metre beam to maximise the exterior space, but employed a nonlinear shape that promotes "energy flow." Think feng shui. Niniette's open stern, facing lounges, hot tub, and, yes, open fire pit make it feel more like an Asian spa on the water than a boat.

"Our designers played with organic shapes to add more flow around the deck," says Timur Mohamed, Palmer Johnson CEO. "It creates a fresh, new way of living on board." Niniette's cabin also has an unconventional circular configuration, matching the above deck. The yacht's equally innovative hull shape, with side sponsons, was designed for stability in rough water, delivering an estimated top end of 44 knots.

The dazzling superstructure glows in the dark.

The superyacht is geared toward outdoor living, offering four decks with luxurious alfresco areas for enjoying the sun. 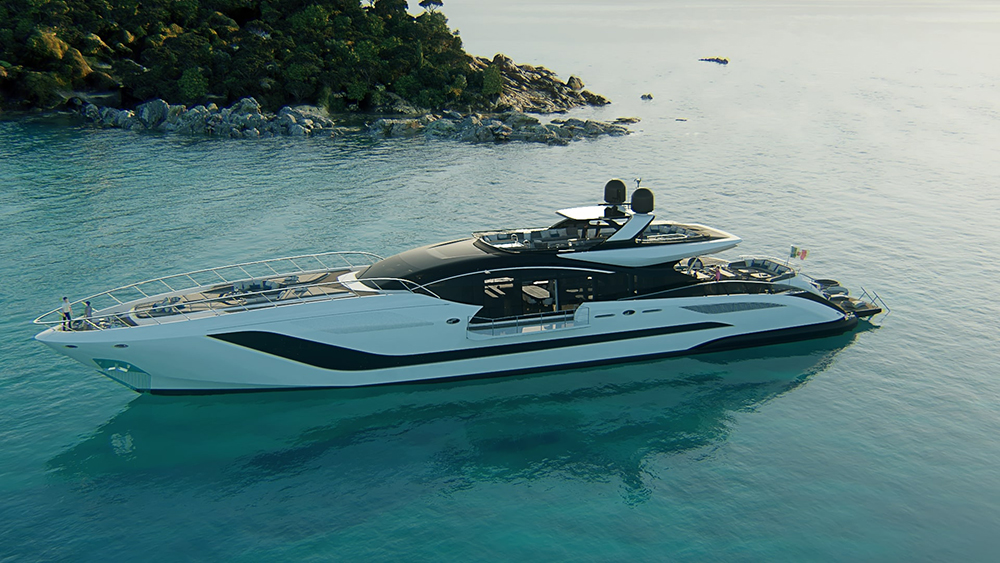 This Sailing Gigayacht Is a 21st-Century Galleon

This Superyacht Has The Best Beachclub In The Business

Sanlorenzo’s SX112 has a jaw-dropping feature that needs to be seen.