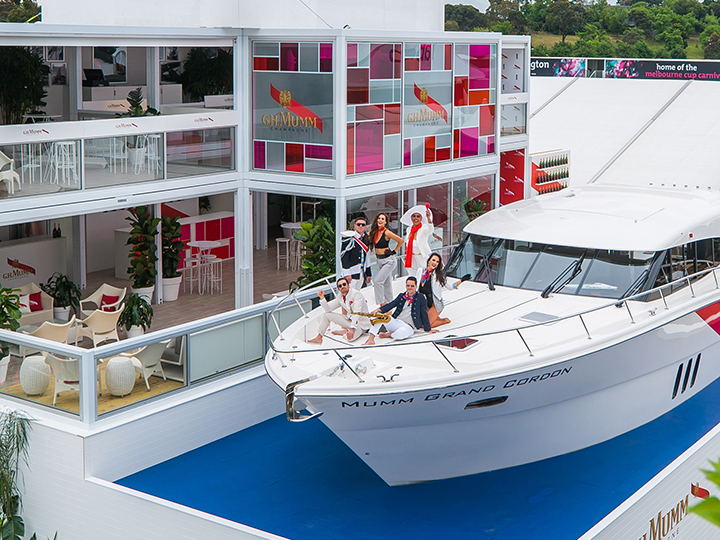 Aussie yacht at the centre of Melbourne Cup celebrations

Maritimo’s S59 is the focal point for the raucous celebrations at the G.H. Mumm marquee in the famed Birdcage enclosure.

The Melbourne Cup marquee that is typically at the centre of the most raucous celebrations inside Flemington Racecourse’s famed Bird Cage enclosure is set for an unusual but upmarket centrepiece this year.

Maison Mumm, the French brand of champagne, rolls out an innovative theme each year and in 2017, its nautical-themed celebrations will be centred around a $2.2 million motor yacht supplied by Gold Coast luxury boat builder, Maritimo.

The recently launched Maritimo S59 cruising motor yacht in question has been christened the “Mumm Grand Cordon” for the event, in the first instance of a luxury motor yacht being placed among the famed marquees that line the Flemington home straight.

Arranging a 59-foot motor yacht as a marquee centrepiece doesn’t happen easily. After showing the boat at the Sanctuary Cove and Sydney International boat shows, Maritimo faced logistical challenges to get it to Flemington. The boat height had to be reduced to 5.1 metres – necessitating the removal of shafts, rudders and props under the boat, as well as navigation gear, electronics and lights on top. It was shrink-wrapped ahead of the long drive to Melbourne, where it barely cleared overhead tramlines on the approach to the racecourse.

A 250-ton crane was required to lift the boat into place, before sections of the Mumm marquee were effectively erected around it.

Maritimo CEO Garth Corbitt said the effort has been well worthwhile. “We have been working alongside Mumm on a number of events in recent times and this promotion, which is our biggest with them, is the pinnacle of those events,” he said.

“It is not every day that you get to see a magnificent luxury cruiser of this size displayed in an environment such as Flemington and particularly when the eyes of the world will be on Melbourne for the Cup and the overall spring racing carnival.” The owner of the newly-launched S59 agreed to allow the vessel to be used and will attend the Cup carnival as a VIP guest of Maritimo and Maison Mumm.

As well as being the clear centrepiece of the famed Mumm marquee, media will interview celebrity guests and VIPs from the cockpit of the yacht during the Cup carnival, while entertainers will perform on the bow of the vessel during each race day.