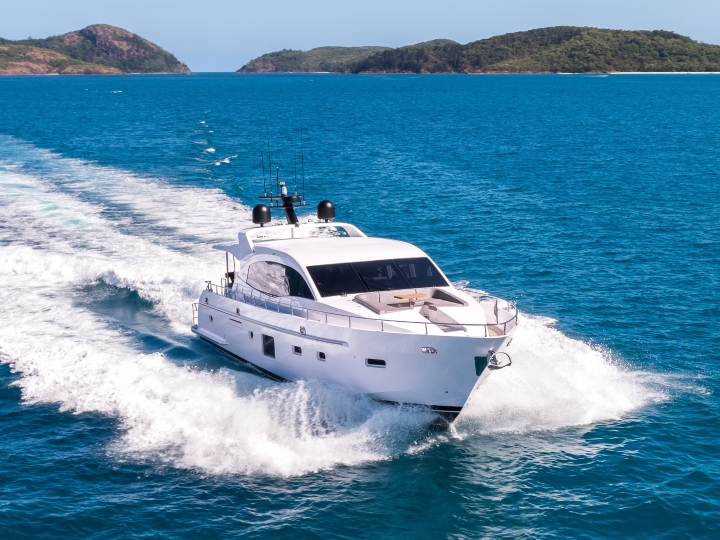 A cruising dream takes shape with this commission by Whitehaven Motor Yachts. The brief was a yacht optimised in terms of its layout, fit, finish and engineering, with significant input from the owners during the 15-month build project.

Sandblasted lime-wash oak timber is prominent and all furniture has been hand-built by Whitehaven to the Davids’ specified designs, with fittings, fixtures and electronics either sourced within Australia or imported. From Italy comes woven-leather feature panels, as well as the Versace ceramic tiles that cover the three bathrooms below deck – including the generously sized master bedroom’s twin-sink en suite. The mid-ship galley, with its contemporary Corian benchtop surfaces and Fisher & Paykel appliances, hints at a kitchen one might find in a luxury inner-city terrace – if it weren’t for the sea views provided by panoramic windows.
The flow between the single-deck open-plan living/dining area and entertainment deck occurs seamlessly beneath Finito’s distinctive roofline, via a one-touch electric sliding door. Twin Caterpillar C18 six-cylinder engines provide a top speed of 24 knots, though fuel efficiency was a priority for long-range cruising. Consumption of 64 litres per hour at 10 knots matches that of the couple’s smaller predecessor.

User-friendly ‘Express Joysticks’ provide fingertip control for docking and manoeuvring in constricted spaces. These will be particularly useful for the Davids’ regular visits to several island groups ranging from northern Australia to as far as Papua New Guinea. It’s just one of countless details that make Finito their finished article.