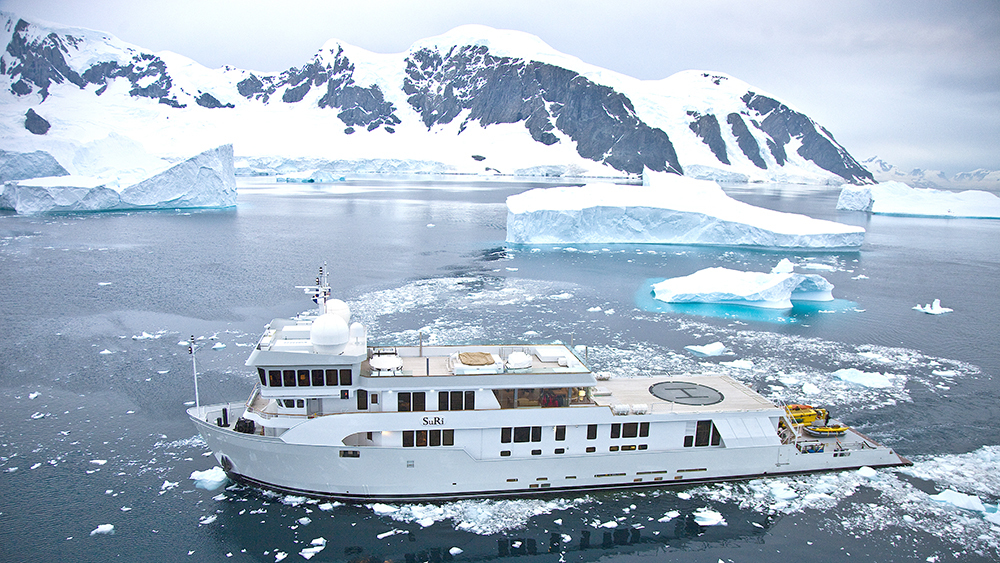 6 Stunning Expedition Superyachts That You Can Charter Right Now

Explore the world with five-star treatment.

With all that is currently happening in the world, many are yearning for new ways to isolate themselves. These six expedition superyachts are built to travel to the most remote and fascinating places on the planet, without sacrificing luxury. Add small submarines, helicopters and snowmobiles to leave the rest of the world behind.

The herculean 77-metre Legend started life as a Russian ice-breaking tug, crunching through the floes of the inhospitable Barents Sea. After conversion to an expedition superyacht in 2003, she had a total refit in 2015 to transform her into a true luxury explorer. With a range of more than 12,000 kilometres, Legend usually spends her summers north of Greenland and around the Baltics and her winters in Antarctica. She has accommodations for 22 guests, with 28 crew. Legend has all the toys for the ice road less travelled: two helicopters, four tenders and, best of all, a three-person U-Boat Worx C-Explorer mini-sub.

ICING ON THE CAKE: Piano bar, whisky bar and snowmobiles.

Heading off the grid can be done in style aboard this 73-metre. Designed by Britain’s venerated Tim Heywood, its high-end highlights include a beach club with wellness spa and a movie theatre with a 119-inch screen. She can lodge 12 guests and carry 20 crew. Beneath the glossy trappings, Planet Nine is a true explorer with an ice-rated, high-tensile steel hull, 16-knot max and 9600-kilometre range. The yacht has a commercial-load helipad to accommodate its MD-600N Explorer helicopter and two custom 9.7-metre Rupert Marine twin-diesel tenders. Find her exploring Northern Europe this summer.

While it looks like a Mediterranean cruiser, this 45-metre superyacht was designed as a world explorer, capable of pummeling giant waves in the Southern Ocean. The yacht brims with technical innovations, such as custom-laminated acoustic and thermal windows and epoxy-infused granite decking. It has staterooms for 10 and crew quarters for 10. For self-sufficiency, there are 11 Hoshizaki fridges and freezers, and fuel tanks that hold around 94,000 litres, or enough for 16,000 kilometres. Big Fish will be located in the South Pacific and Australia for the summer.

ICING ON THE CAKE: A 6.7-metre- tall video wall in its central lobby.

“A rhino disguised as a swan.” That’s how the builders of the 68-metre ice crusher Project Ragnar describe this to-the-ends-of-the-earth explorer yacht. Originally built in 2012 as an ice-breaker supply ship, the yacht is fresh out of a two-year, stem-to-stern conversion by Icon Yachts. The makeover included a redesign by UK designers RWD that transformed the bow and superstructure. The vessel has a top speed of 12.5 knots and range of 9600-kilometres. Able to house 12 guests and 13 crew, the boat will visit Scandinavia and cruise across the Northwest Passage and around the US to Alaska.

ICING ON THE CAKE: Onboard wellness centre with steam room and snow room, and a Ripsaw EV2 snowcat.

Top up Yersin’s 348,000-litre tanks, and the spectacular 76.5-metre luxury expedition yacht will take you from, say, San Francisco to the southern tip of South America and back. That’s more than 24,000-kilometres on one tank. With diesel-electric propulsion and catalytic exhausts that filter 99.8 per cent of emissions, Yersin has also been designed to have minimal impact on the environment. The summer itinerary is Northern Europe. Foul-weather features include a 12-seat movie theatre, spa and gym. Guest quarters house 12, while crew size can expand to 24.

This hulking, 64-metre explorer, dubbed “the world’s most adventurous superyacht,” is currently on a voyage in the Indian Ocean, with her Triton submersible diving to one of the deepest points in the world’s oceans. SuRi also typically visits Fiji, Papua New Guinea and Palau. Her rear hangar is packed with everything from a four-seat Eurocopter Squirrel helicopter and SeaRey amphibious plane to her two-seat Triton sub and 10-metre StanCraft wooden speedboat. Able to accommodate 12 guests with 20 crew, she has a range of almost 16,000 kilometres at 11 knots.

ICING ON THE CAKE: Glass floor panels in the salon to view sea life below.