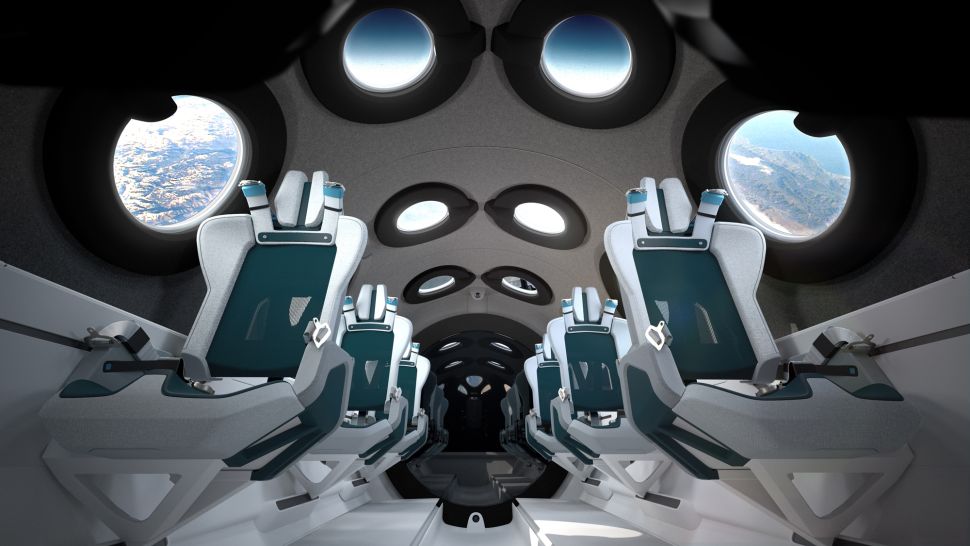 Forget the cramped NASA capsule. This looks more like a bespoke business jet with high-tech recliners and 12 windows that let you see space from every angle.

Virgin Galactic revealed the interior of its Spaceship Two vehicle, VSS Unity, earlier today in a YouTube video. Unity’s interior, roughly the size of a midsize business jet, incorporated a minimalist design, with six high-tech seats for the “astronauts”—or space tourists paying for the experience—and 12 domed windows that allow simultaneous views of space and planet Earth, either from their seats or while floating around in a weightless state.

The company today also released a free app on the Apple Store.

“We built this spaceship from the inside out,” Sir Richard Branson said during a smaller, follow-up press conference hosted on Zoom. “We started with what we believed would be an optimal customer experience and then built the spaceship around it. This cabin will allow thousands of people to realize their dreams of travelling in space.”

The interior of Unity looks like a futuristic business jet, with a similar size and proportions, surrounded by windows.

The interior reveals a blend of high-tech, ergonomics and contemporary interior design. The seats, for instance, will be customised for each astronaut, and drop into a reclining mode when Unity hits space, at which point participants are free to float around the cabin.

“They’re unlike any seats that have ever been designed before,” said Jeremy Brown, Virgin Galactic’s chief designer. “They are designed so that the astronauts will be comfortable in both zero gravity and in 1G on the ground. The body will be subject to much higher G forces as Unity travels into space, so the seats are designed to hug in all the right places for a snug fit.”

The interior, designed by Virgin Galactic with Seymourpowell, London, also has special colours for the seating and walls. “Golden metallics resemble luminous desert sands, blues conjure celestial spaces and teals inspired by the ocean ground travellers back to Earth,” said a statement. Brown said the one-piece spacesuits by Under Armour have also colour-coordinated with the interior. Under Armour also designed the high-tech material on the sea tops.

The windows are places all over the cabin, so passengers can see space or Planet Earth, from their seats or in a weightless state.

Beth Moses, Virgin Galactic’s Chief Astronaut Instructor, did a trip into space aboard Unity in February 2019. She will be training astronauts for three days before the actual flights take place. The video shows her clearly thrilled with the weightless experience and being able to look back at our bright blue planet. She was also wired up so that scientists could measure her body signals on earth. Virgin Galactic has built a special training centre on the third floor of its Space Center in New Mexico.

Virgin Galactic won’t reveal the price for this out-of-world experience, but the Virgin Galactic website says it will be roughly more than $350,000. Six hundred people have paid $1400 refundable deposits to be included on the astronaut list, but only a few will most likely be able to afford the ticket.

Chief space officer George Whitesides said that one, and possibly two, more flights will be necessary before they open the space experience to paying customers. He did not give a time frame. Whitesides also said the spaceship would be used to host scientists working on space-related experiments.

The seats will be customised to each astronaut’s shape and body weight. The seat’s exterior fabric by Under Armour was also designed to mesh with the spacesuits, which the clothing manufacturer also made.

During the press conference, the Virgin Galactic team was clearly pleased with the high-tech but stylish interior, which has special LED lighting that changes colours depending on the stage of flight (colours go off when it reaches the apogee—the farthest point from the Earth).

The windows also have LED colours around the soft rims, where floating astronauts can hold on, watch colours change, and enjoy the view.

An “analog” mirror in the back of the spacecraft lets participants watch themselves floating in space.

The mirror in the back of the interior was included so participants could watch themselves floating in space.

“The spaceship cabin interior is in many ways the design centrepiece of the astronaut journey,” said Virgin Galactic’s new CEO Michael Colglazier. “What has been created will both facilitate and elevate a uniquely profound and transformational journey for the thousands who will fly.”