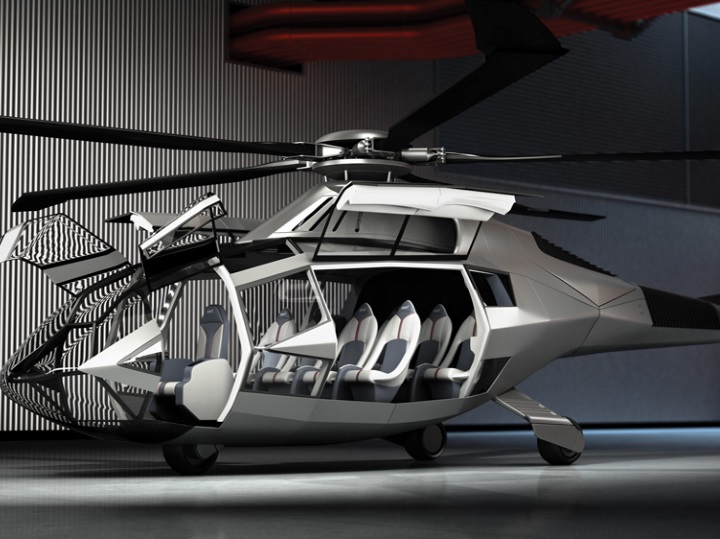 Four signs that the future is going to be amazing

From reimagined rotorcraft to a steampunk-styled watch, these concepts may be closer to reality than you think.

From helicopters to yachts to cars (and various things in between), we look at concepts and designs that suggest our possible (and probable) future. The following images are a glimpse into the "beta version" of the life that we'll be living in just a few short years.

Odds of Production: The technology is coming

The news of Bell Helicopter's FCX-001— the company's first-ever concept aircraft — has raised expectations for aeronautic advancement. The high-tech transport, which debuted in March at Helicopter Association International's Heli-Expo in Dallas, features a hybrid propulsion system comprising a thermal engine and electric motors. The airframe is made of sustainable composite materials and designed to harvest, store, and distribute wind and solar energy.

Also on board is an innovative anti-torque system. Located in the rotor less tail boom, it is powered by those electric motors and quietly keeps the aircraft from spinning in the opposite direction of the main rotor. Bell puts a new spin on the rotor by equipping it with blades that shape-shift based on flight conditions, to ensure the most efficient path through the air.

The single-seat cockpit and modular cabin are equally evolutionary. Both are outfitted with artificial intelligence and augmented reality to assist the pilot and provide entertainment for passengers. Odds of Production: If you can buy it, Fournier will build

A unique lever-based winding system replaces the traditional crown and transfers energy via a gear system. The gears are visible through a cylindrical crystal located on the bottom right quarter of the watch. This steampunk vision, which has been under wraps since 2012, could become an actual timepiece: Fournier, the founder and owner of Horology Design and the sport-watch brand Wryst (wryst-timepieces.com), will build it for a buyer who can afford the undisclosed price.

A whale of a yacht With its wide, rounded bow and twin engine pods attached to wings that extend from either side of the hull, the 150-foot (45m) Seataci evokes the starship Enterprise, but its propulsion system is more marine biology than science fiction.

It features a mechanism that mimics the sweeping motion of a whale's tail as part of what designer Charles Bombardier calls a biomimetic system. The large, oscillating foil could prove more efficient than a traditional propeller — and quieter. In addition to housing the engines that power the foil, the pods, which are submerged, provide stability.

Seataci could include 12 guest quarters and more than two dozen crew members. The main deck holds two large swimming pools surrounded by tropical gardens, and two landing stations for personal drones. The hull's ballast system allows it to be submerged so that the saloons and dining areas can become underwater viewing stations.

The cost of building the vessel is around $US100 million (about $A131.6 million); Bombardier says it could cost more — or less — depending on the design of the interior. Odds of Production: Clear space in the garage for it

When it goes into production — and it's "very close" to doing so, according to Mercedes-Benz— the first independently developed four-door sports car from Mercedes-AMG will further expand the subbrand's GT lineup.

The series already comprises two roadster variants and four coupes, including the track-ready GT R. The production version of the GT Concept will be Mercedes-Benz's answer to the Aston Martin Rapide and the Porsche Panamera.

At the unveiling in March at the Geneva International Motor Show, Daimler AG's chief design officer, Gorden Wagener, called the car "the most extreme, most powerful design we have recently seen."

The car is powered by a plug-in hybrid power train that combines AMG's 4-litre biturbo V-8 with an electric motor. Together they produce 600kW and enable a zero-to-100km/h time of less than 3 seconds.