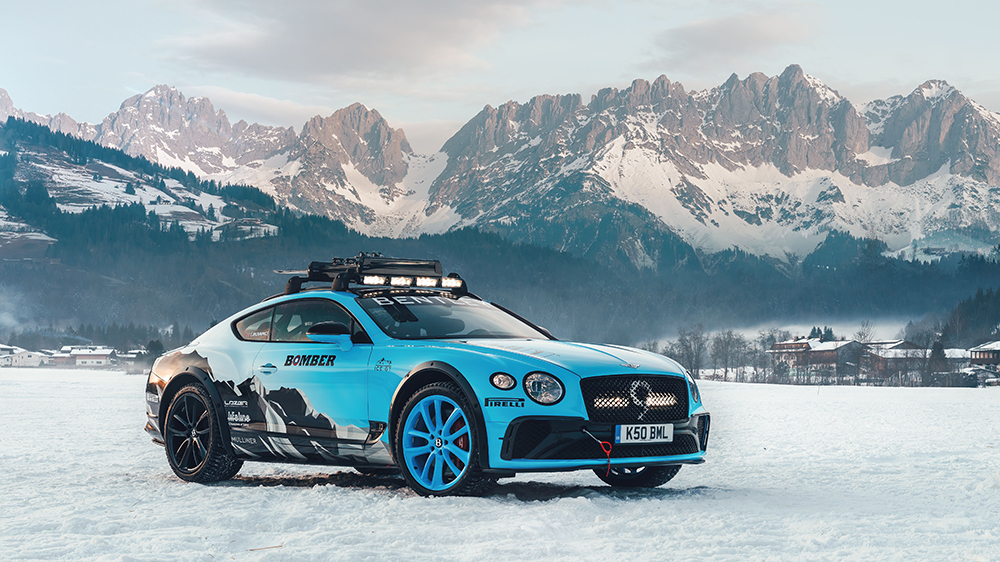 This Bentley Continental GT Is Built To Go Ice Racing

The car will compete in the second-annual GP Ice Race in Zell am See, Austria.

The first thing that comes to mind when most people think of Bentley is regal luxury. But a new heavily modified version of the Continental GT set to make its public debut next weekend may shake up this perception a bit.

Bentley Motorsport will compete in the second-annual GP Ice Race in Zell am See, Austria, with the specially prepared coupé on February 1 and 2, according to a press release. Behind the wheel of the car will be Junior World Rally Championship driver Catie Munnings, the first woman to race for the automaker’s racing division in the modern era.

Despite a bold sky blue livery inspired by the Continental GT that broke the production car record at Pikes Peak last year, the winter rally version of the car isn’t all that different from the one you’d find at your local Bentley dealership. In fact, the brand’s racing division purposely tried to keep the race car as close to factory-spec as possible.

That’s because the Continental GT’s stock 6.0-litre W12 twin-turbocharged TSI engine is more than powerful enough to conquer the purpose-built ice track. The all-wheel-drive coupé’s hulking powerhouse produces a stunning 626 horsepower and 664 lb-ft of torque and is capable of pushing the coupé from 0-to-100-km/h in just 2.7 seconds and hitting a top speed of 333km/h. Other stock features include iron brakes, 48-volt active anti-roll system and air suspension.

Of course, as powerful as the Continental GT may be, some changes were necessary for next weekend’s race. Munnings’s car has had its ground clearance increased and has been outfitted with wider arches, custom Akrapovic exhaust system, massive studded Pirelli Scorpion Ice Zero2 tiers and Lazer high performance lights. Other safety fixes include a rear roll cage, on-board fire suppression system, racing seats and harnesses.

Munnings, for one, seems more than pleased with the coupé. “I’m completely blown away by the car, and I actually still can’t believe I’m getting to let loose in a Bentley to do an ice race,” she said in the release. “I spent some time on ice in the car just before Christmas. At first I thought it would feel heavy, but I was amazed by how dynamic, nimble and responsive it is. It can dance like a lightweight rally car, and I can’t wait to race it at such an iconic event.”