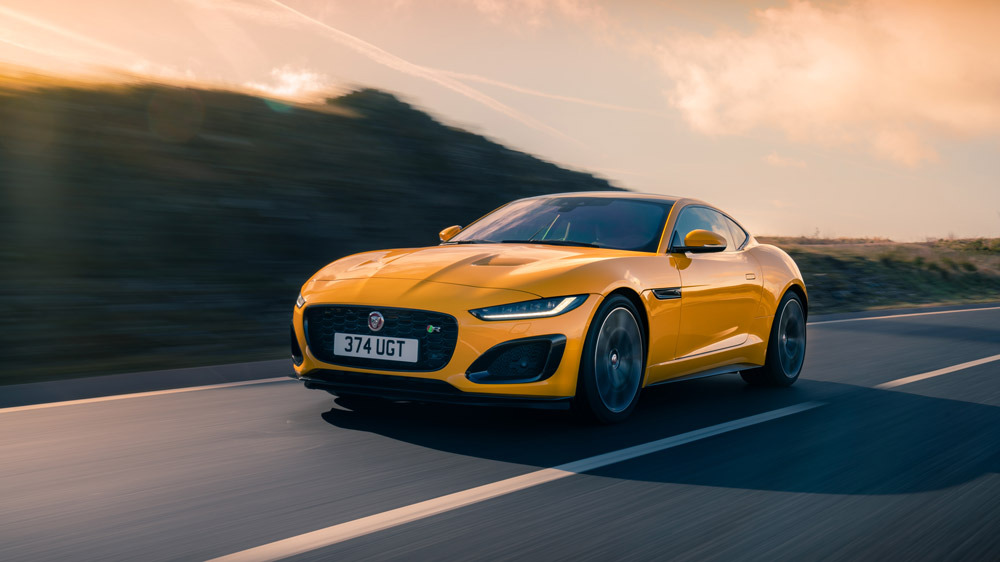 The Nimble 2021 Jaguar F-Type Goes Against The Grain

We recently let the car sharpen its claws on the winding roads of Portugal’s Douro Valley.

As the popularity of SUVs has surged, special cars seem even more special. When the Jaguar F-Type debuted in 2013, it was already a design standout—an Ian Callum vision spun out of the E-Type’s legendary, gossamer dreams.

I’m reminded of this fight against the boring and ubiquitous as I look upon the yellow hide of a gleaming wet 2021 F-Type, updated and not at all crossover-ified. It’s raining here in the Douro Valley of Portugal, but a ray of light has spiralled out of the clouds, catching the Jag in a narrow spotlight. The machine is more vibrant than its surroundings, the bright spot in a dreary day.

The updated coupe and convertible will both be available at dealerships come Autumn. The F-Type can be had with three engine variations: a 2-litre turbocharged four-cylinder engine (220kW), a 3-litre supercharged V-6 (283kW) or the full-on 5-litre V-8—now uprated to 428kW and 700Nm of torque.

The top-range V-8 comes in at just over $157,000 for the coupe and around $160,000 for the drop-top variant. Only the 4-litre, however, which starts at around $93,400, is offered with rear-wheel drive. A manual is no longer an option. Instead, the cars have a highly capable ZF eight-speed automatic that has been pleasingly tuned for hearty performance.

Jaguar is treating this as a new F-Type. Though less than a decade old, the nameplate has already seen its share of changes and revisions. The initial launch program remains fresh in my mind, when I learned that its spirit was less a refined European tourer and more akin to a hootenanny episode of The Dukes of Hazzard. A 5-litre V-8 sent wallops of power to its rear wheels, easily provoking smoky doughnuts—even when you weren’t trying to do such a thing.

That wildness was denuded two years later when Jaguar cancelled the rear-wheel-drive configuration in lieu of an all-wheel drive. That car was too tamped down and had a galling tendency to understeer. The ability to handle curvy roads was best exemplified by the later SVR edition, which achieved a detente between rip-snorting lunacy and I’ll-reach-home-safely competence.

What is one to expect from this update? To that, let’s go back to the looks of the new car. Jag’s director of design, Julian Thomson, has taken up Callum’s front office, but largely left the good stuff alone. The face is different, the result of thin LED headlights replacing the more fulsome eyes. It’s a bid of modernism, and not unwelcome. Otherwise, the front and rear bumpers have been reworked. So, it still looks good, and you’ll never confuse it with anything other than being a Jaguar. That’s a good thing.

The top-range V-8 version comes in at just over $157,000 for the coupe.Photo: Courtesy of Jaguar Land Rover.

More important, in some aspects, is the stuff we can’t see. We may talk about engines and power, but a sports car lives or dies by its suspension tuning. The 2021 editions have revised springs, dampers and anti-roll bars—the kinds of things we never think about when circling a sports car in the showroom. But those components are the alchemical difference between a great or disappointing experience on back roads.

Another change worth noting: The F-Type’s engine noise was infamous. The V-8 sounded like M-80 firecrackers going off in a metal garage can. Great fun on a 15-minute joyride, yet tiresome over long drives.

Now the V-8 starts in quiet mode (though the feature can be overridden); a fact that the neighbours will be thankful of. It still features a wonderful pop and crackle when you come suddenly off the gas, but no longer sounds like the Firework Night on a sound loop. Even the turbocharged four makes happy noises.

The four-cylinder is not an obvious point of discussion when it comes to this car, but the lightened nose and rear-wheel drive make for a truly pleasurable combination. It hunts eagerly along curvy roads. If you were looking for a relatively inexpensive plaything for summer drives, especially in convertible guise, the base Jaguar is quite enticing.

The interior of the F-Type’s four-cylinder variant. Photo: Courtesy of Jaguar Land Rover.

The big dog remains the R—the V-8. And here the F-Type achieves real performance chops. As it’s pushed to maximum limits on the twisty (and wet) roads we tested in Portugal, the car handles far more naturally than ever before. It’s still not as supple as, say, a Porsche 911. But it retains some muscle-car bravado without feeling squirrely.

The rear-wheel-drive 2021 Jaguar F-Type convertible powered by a V-8.

As I guide its long nose down the spiralling mountain roads of the Douro Valley, vineyards whizzing by, I know this: The latest F-Type makes a great bid at specialness and worthy of serious consideration if you’re looking to fight against the crossover world of conformity.