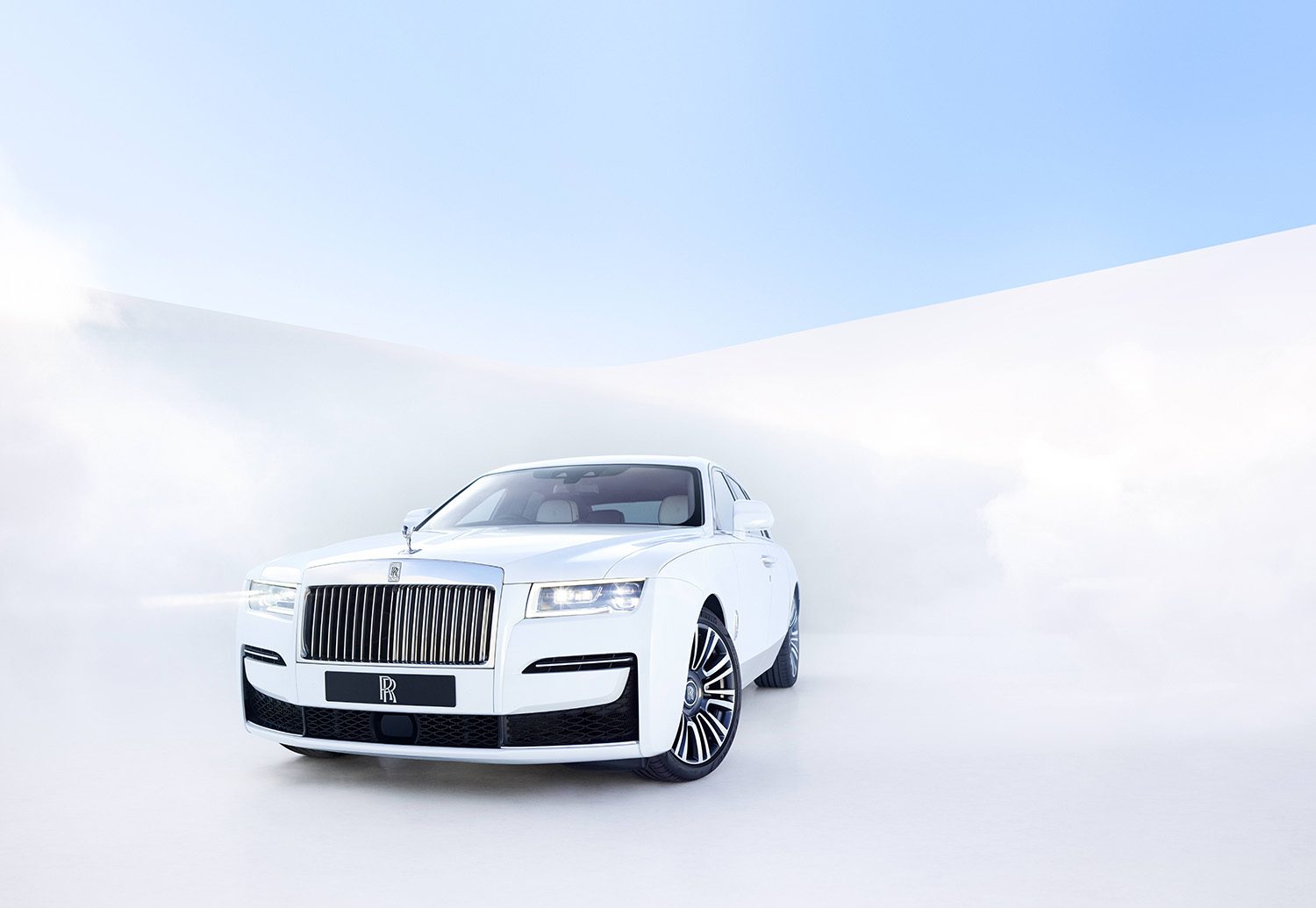 The popular model has undergone a complete redesign.

It’s easy to gaze longingly at the all-new Rolls-Royce Ghost, which debuted today, but you might not notice that, while the elegant profile may look little changed from the current model, only two components are carried over—and one of those is the umbrella.

“Everything was designed, crafted and engineered from the ground up. The result is the most technologically advanced Rolls-Royce yet,” explains Torsten Müller-Ötvös, CEO of Rolls-Royce Motor Cars. 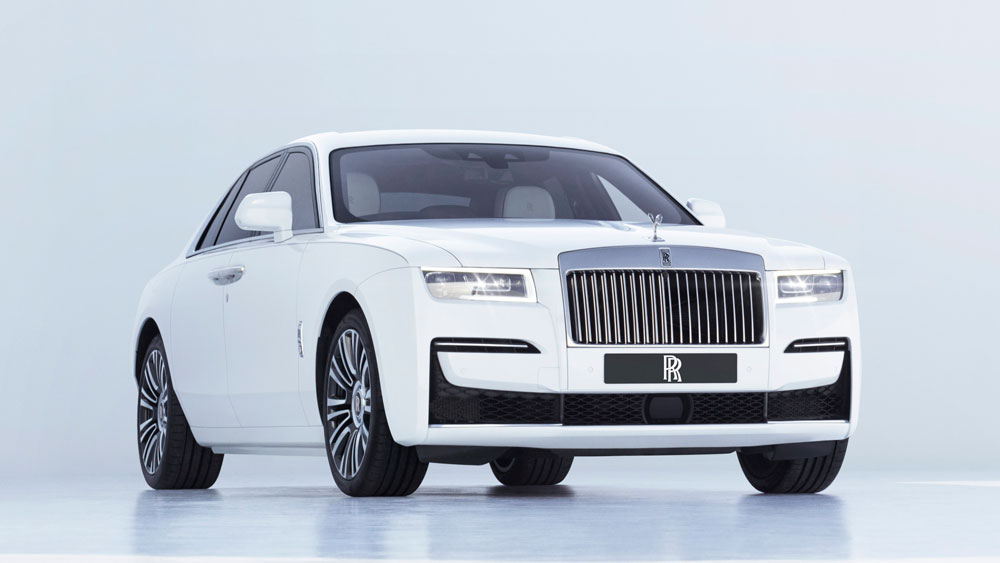 The multitude of improvements for the 2021 model includes a new, all-aluminium spaceframe architecture, an all-wheel-drive configuration, rear-wheel steering, a redesigned suspension to enhance that “magic carpet” ride, power-opening as well as power-closing doors and an even greater focus on silent running.

With this new version, the company says it is responding to a shifting attitude among Ghost buyers; the need for a less ostentatious, more minimalistic and subdued style. Internally, the company refers to the trend as “Post Opulence,” describing it as “a movement defined by authenticity of materials.”

You see it in the car’s new exterior design, which is smoother, more rounded and containing fewer crease lines and body-panel joints. Inside, the new direction translates into a cleaner, less fussy fascia, and less busy stitching for the upholstery. 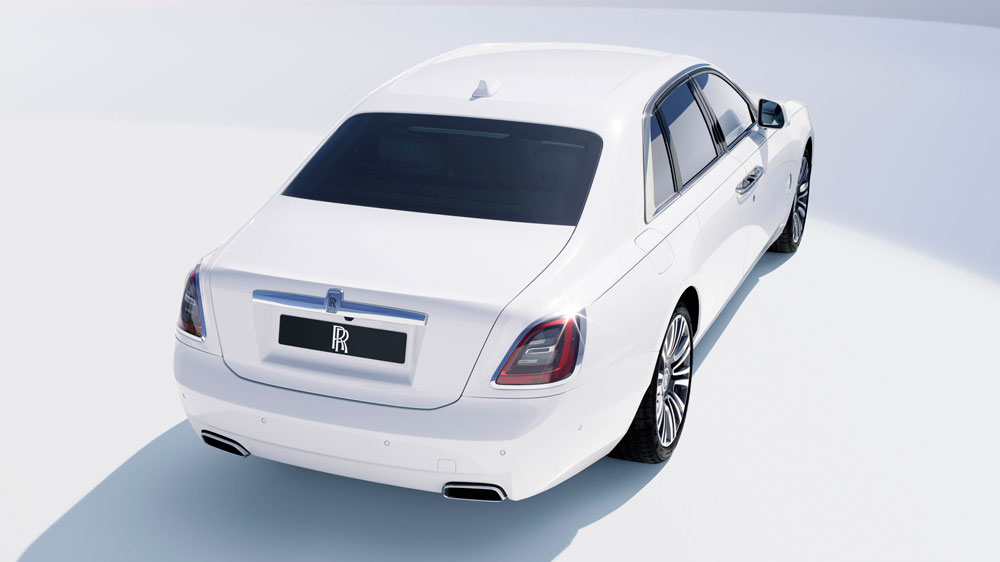 Since its launch in 2009, the Ghost has been the most successful model in the marque’s 116-year history, bringing in younger buyers attracted to a slightly smaller, more driver-focused vehicle than, say, the flagship Phantom.

But this new Ghost isn’t smaller, at least compared to its predecessor. Overall length has grown by 3.5 inches, width is up 1.1 inches and an extra inch has been added to the height.

Other key exterior changes include a statelier, more distinctive grille which, for the first time on a Rolls, features a down-lighting element. Twenty LEDs set underneath the top of the Pantheon grille ever-so-subtly illuminate the stainless-steel blades, giving the car a unique lighting signature. 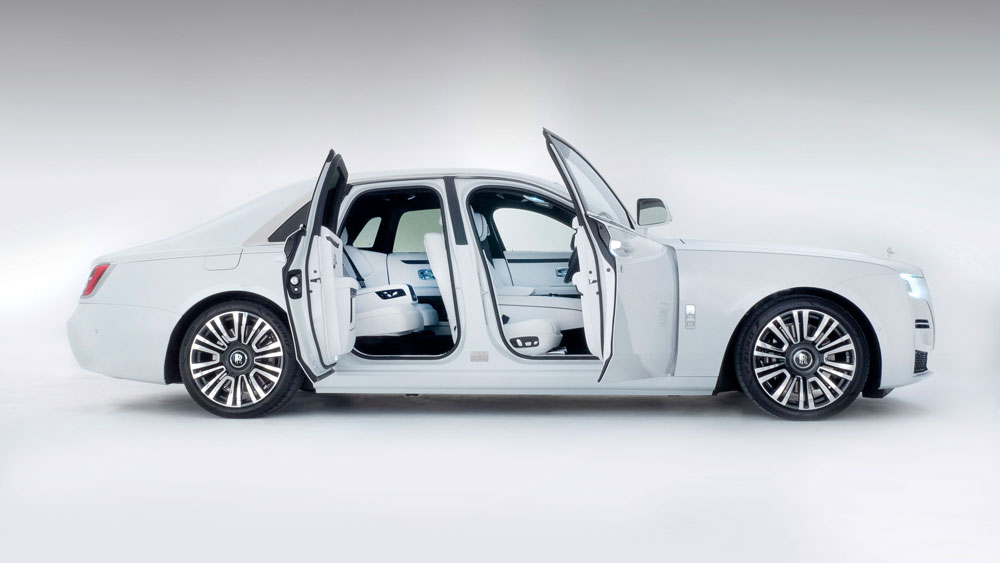 The Ghost has been lengthened by 3.5 inches and is an inch taller than before. Photo: Courtesy of Rolls-Royce Motor Cars.

Beneath the grille, the lower bumper design switches from three horizontal sections to a full-width black intake with honeycomb inserts. And larger, more rectangular headlights are also part of the redesign.

As for that all-important new chassis, it’s a development of the so-called “Architecture of Luxury” first used on the eighth-iteration Phantom and passed on to the Cullinan SUV. In the Ghost, the suspension mounting assemblies were pushed to the very front of the car to allow the 6.75-litre V-12 to sit behind the front axle, achieving an optimum 50/50 weight balance. 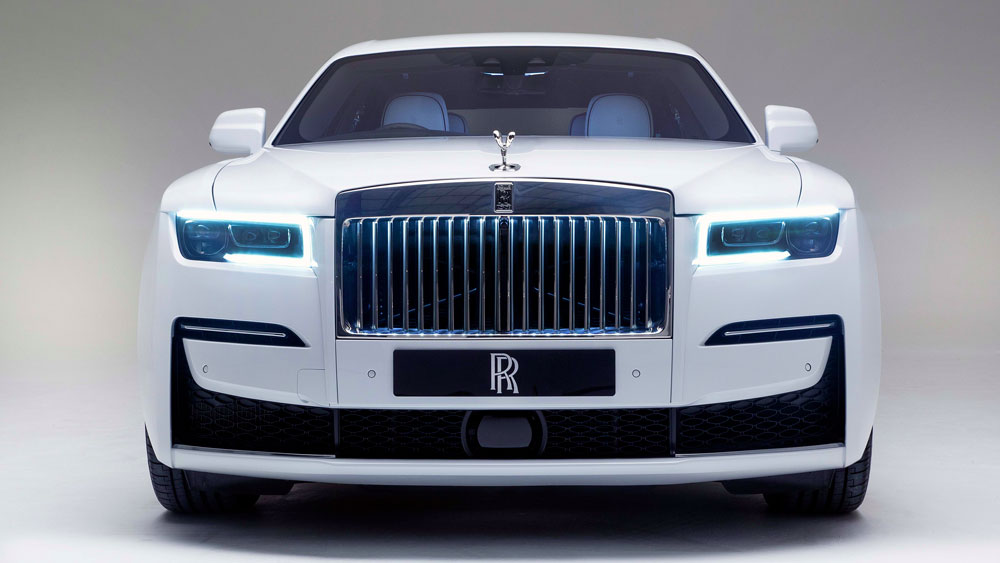 Twenty LEDs set underneath the top of the Pantheon grille give the car a unique lighting signature. Photo: Courtesy of Rolls-Royce Motor Cars.

That big 12-cylinder heart is essentially unchanged, delivering 420kW and 850Nm of torque to all four wheels. Custom engine mapping allows the V-12 to produce maximum torque from just 1,600 rpm.

To deliver an even more refined and seemingly effortless ride, Rolls engineers say they’ve come up with a completely new front suspension system. 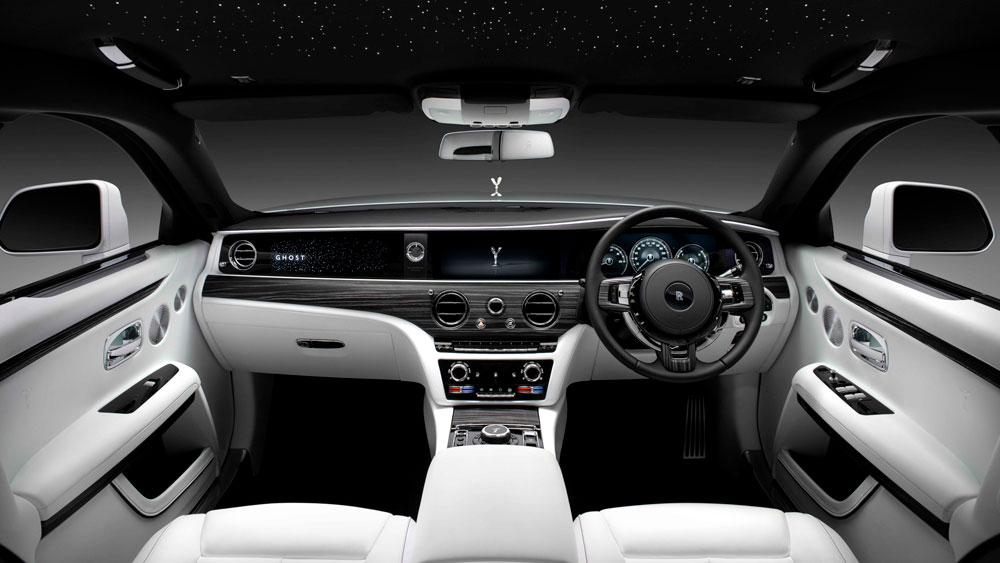 Incorporating what they tout as the world’s first upper wishbone damper above the front suspension assembly, it works with the car’s self-levelling air struts and continuously variable shocks to increase smoothness while reducing body roll.

Rolls claims, rather ambitiously, that it “creates a sense of flight on land never before achieved by a motor car.” We certainly can’t wait to try it out. 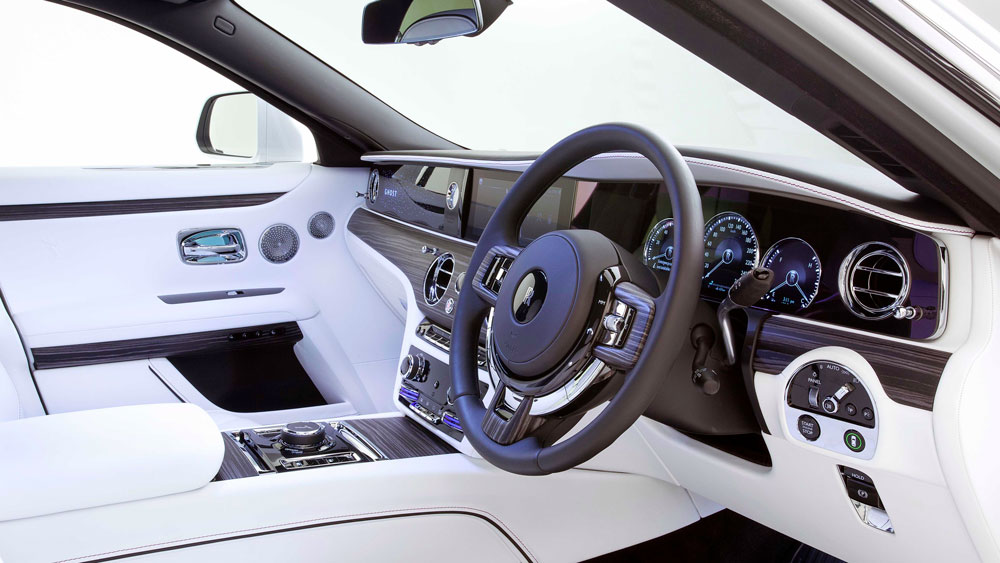 This improved magic carpet ride is reportedly matched by next-level interior quiet. Both the front engine bulkhead and floor panels are double-skinned to reduce engine and road noise. In addition, a total of more than 100kg of acoustic-damping materials have been applied to everything from the inside of the doors to the roof to even the inside the tyres. 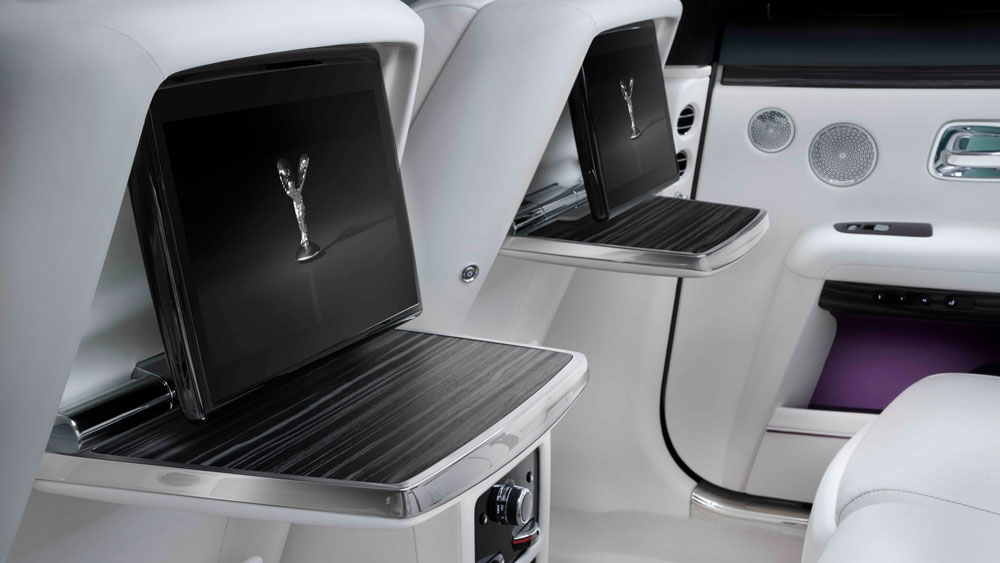 Although the car is more driver-focused than ever, the backseat experience is not to be missed. Photo: Courtesy of Rolls-Royce Motor Cars.

Interestingly, during the six-year development of this new Ghost, engineers managed to achieve complete silence in the cabin, only to discover that test customers found the experience disorienting. Instead, the development team went for a single, highly subtle note they call, fittingly, “a whisper.”

As you might expect, the redesigned interior is as sumptuous and highly crafted as ever, but with a few twists. One delightful innovation is the illuminated fascia. Designed to complement the Ghost’s Starlight Headliner, it features a passenger-side panel with 152 tiny LEDs that twinkle around the Ghost logo. 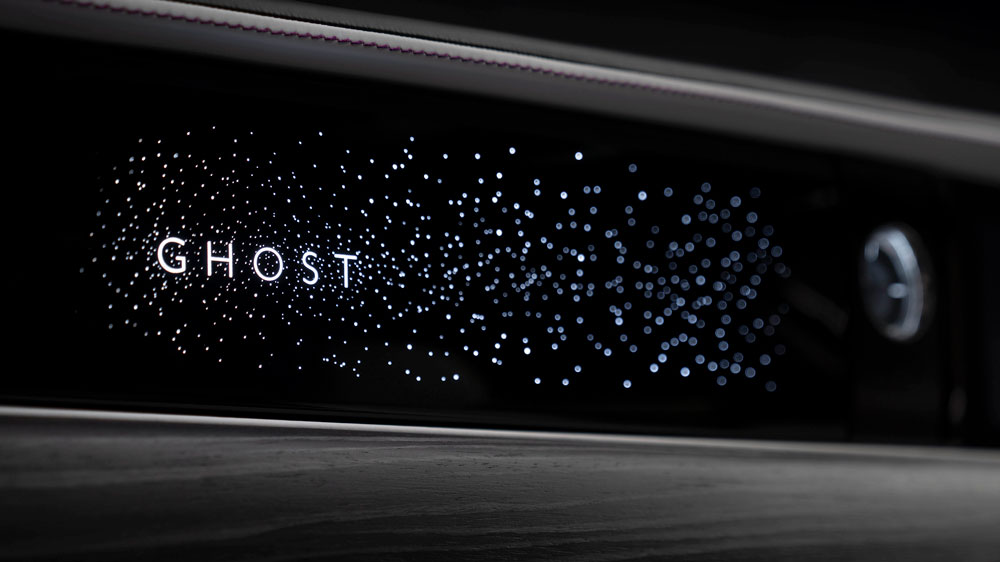 Production of this all-new Ghost has already kicked-off, with U.S. examples expected to arrive in the first quarter of 2021. There is, however, no word yet on pricing (the outgoing model started at $628,000) or when Black Badge or extended wheelbase variants will land. Oh, and as for the second feature carried over to this Ghost, it’s the iconic Spirit of Ecstasy hood ornament—but you knew that.