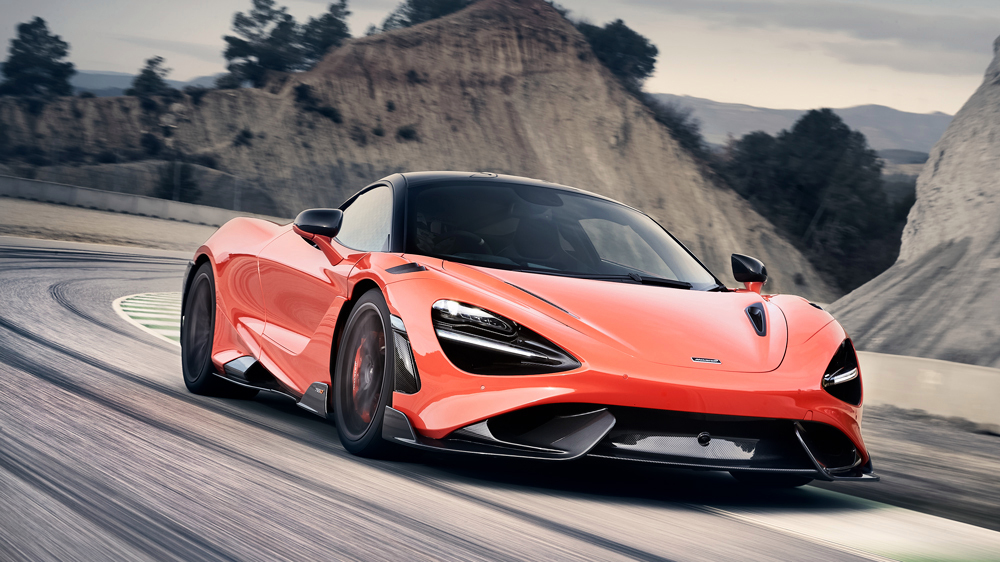 Lighter and quicker than its 720S sibling, the latest in McLaren’s Super Series is best left for the track.

The 765LT has a base of $600,000, excluding on-roads, and only 765 examples will be produced (with the entire Australian allocation already sold out for 2021). The body was painted a color called Ceramic Gray, a $12,900 option with a distinct lilac tint that received compliments from many observers. Punctuated with orange calipers and black carbon-fiber bits, the car is a striking outlier parked next to almost anything else on four wheels—short of a few Italians and one French marque that come to mind.

The 765LT looks to be from another planet. That’d be a planet with wide roads, because the McLaren, while low—it’s only 1.2m high—is broad of beam. At 2.15m side-to-side with mirrors spread, that’s only a touch wider than a super king sized mattress, most of which do not ride as firmly as the McLaren. 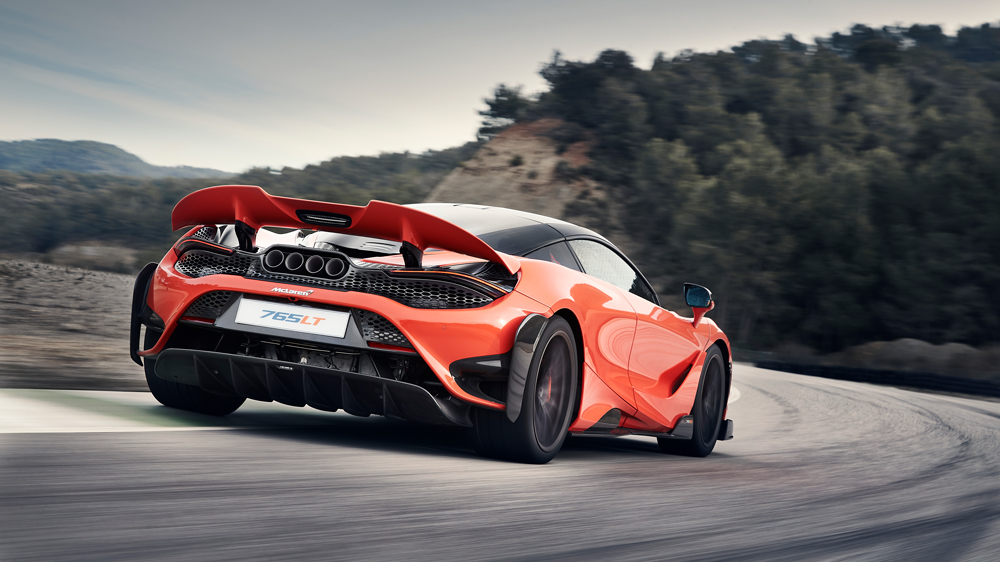 A total of 765 examples of the car will be produced. Photo: Courtesy of McLaren Automotive Limited.

According to its designers, the 765LT’s mission is track-focused, and not aimed at everyday comfort in the manner of the 720S or, certainly, McLaren’s new GT. The driver is connected to everything, which is all felt by the seat-of-the-pants through components like stiffer engine mounts and vise-like carbon-ceramic brakes. Brake calipers from the McLaren Senna poke out from behind 10-spoke ultra-lightweight forged alloy wheels—19- and 20-inch front and rear, respectively—using titanium wheel bolts and running Pirelli P Zero Trofeo R tyres.

The most obvious connection to all that performance is McLaren’s 4.0-litre, twin-turbocharged V-8 engine, its uprated internals helping to deliver 563kW at 7,500 rpm and 800Nm of torque at 5500rpm. Those numbers, while hardly immodest, cannot convey the explosive acceleration and power band of the engine, which gets the 765LT from zero to 97km/h in 2.7 seconds, due in part to the seven-speed Sequential Shift gearbox with shortened gear ratios. Top speed is 330km/h, and half that velocity is achieved in seconds. It’s with such accelerative antics that the 765LT reminds us that its place really is on a circuit and not civilian asphalt. 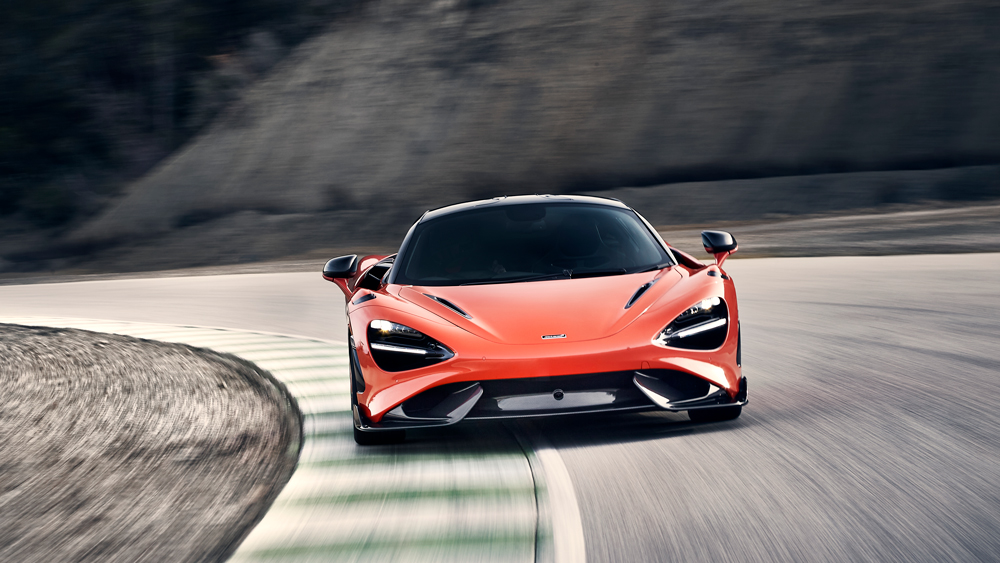 Outwardly, the McLaren declares its competitive personality with a longer front overhang, deeper front splitter, long-tailed rear with its huge lower diffusor and an active rear wing that could double as a surfboard. As with other state-of-the-art supercars, active aerodynamics are key to speed, stability, handling and safety. Wicked side blades extend from the front wheels and across the doors and, combined with other bodywork, help create 25 percent greater downforce than the 720S. Optional front fender louvers aid cooling, further improve downforce and just plain look cool.

As noted, the 765LT is a big car, and not one to be glibly flicked into the tightest hairpins welcomed by any Lotus, Miata or even mid-engine Porsche. It’s for sweepers, running flat out on an empty highway or, better yet, on the tarmac. 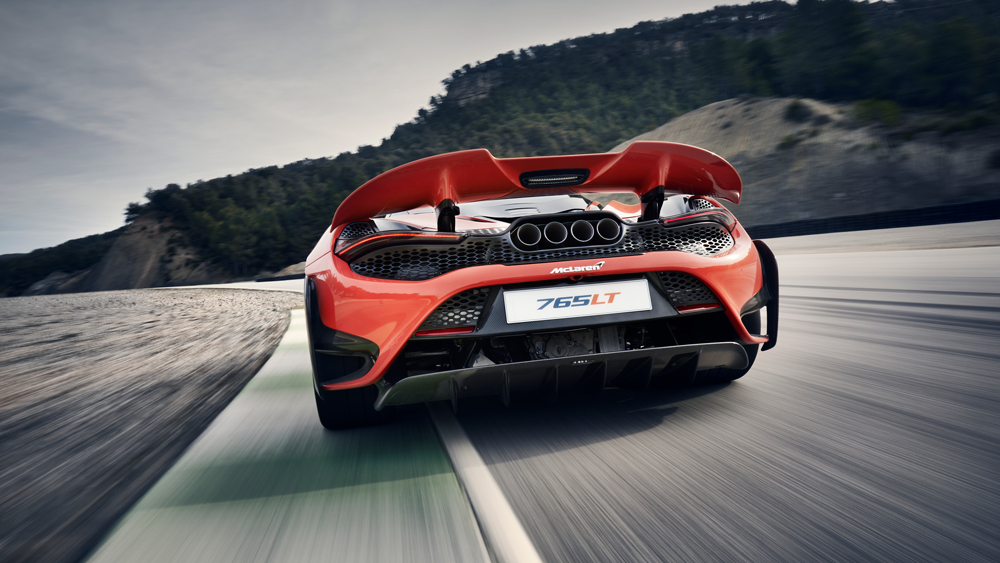 The back of the vehicle features the performance-enhancing titanium exhaust, a huge lower diffusor and large active rear wing. Photo: Courtesy of McLaren Automotive Limited.

Despite its built-for-performance persona, the 765LT features an interior that’s not bereft of creature comforts. Once over the high side sill, occupants tumble into comfortable sports seats. The well-executed Alcantara upholstery, tidy switchgear and minimalist centre-tunnel touchscreen create a sober environment, which is a nice change from the visual assault of some glass cockpits—busier than a video pinball arcade. Two identical rotary switches on the central tunnel, one for engine and one for suspension, allow the driver to select modes for Comfort, Sport and Track, dialing in increasing amounts of aggression as one goes from C to T. Absent any selection, the car does its thing automatically and without any gear-change intervention from the driver. Manual shifts are possible via the paddle shifters, which rotate with the steering wheel and will require mental adjustment for drivers more familiar with stationary stalks.

Truth be told, the auto-shift, even in full-anger Track mode, is far and away the most efficient way to tackle shifting, and allows drivers to concentrate on the road ahead, which spools up real fast thanks to the McLaren’s blistering acceleration. One neat parlor trick is the digital display directly in front of the driver, which shows a full dash-load of “instruments” in Auto, Comfort and Sport, but which rotates to become a sliver of LEDs that show only rpm and the selected gear when in Track. 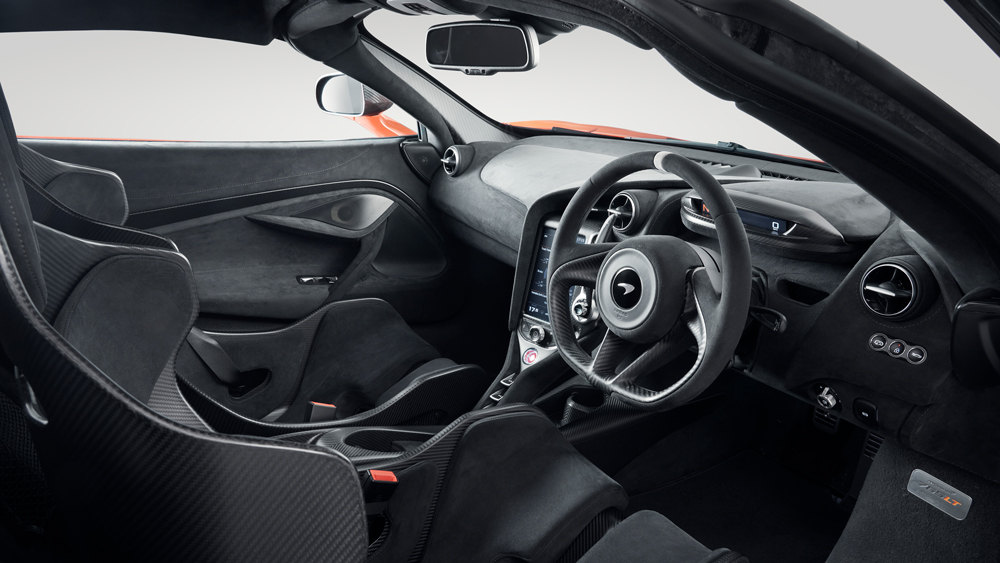 McLaren engineers are justifiably proud of the lightweight, performance-enhancing titanium exhaust. It adds some high-strung urgency to the 765LT engine’s soundtrack, which doesn’t really sound like any other engine at all. But fans of the Prancing Horse still have the best sounding V-8 by a wide margin.

Stabbing the start button and setting off for an early morning drive down my hill to the boulevard below, the 765LT reminds me that it’s not happy being pressed into service as mere transportation, especially from a cold slumber. The carbon monocoque cage may be as stiff as Cheops’ pyramid, but until the drivetrain is warm, creaks and bucking shifts punctuate the first stretch, as if the machine got up on the wrong side of the bed. Owners desiring a magic carpet ride will need to look to McLaren’s neighbor in Goodwood, an hour south of the Woking factory, where Rolls-Royce Motor Cars set the bar for wafting tranquility. 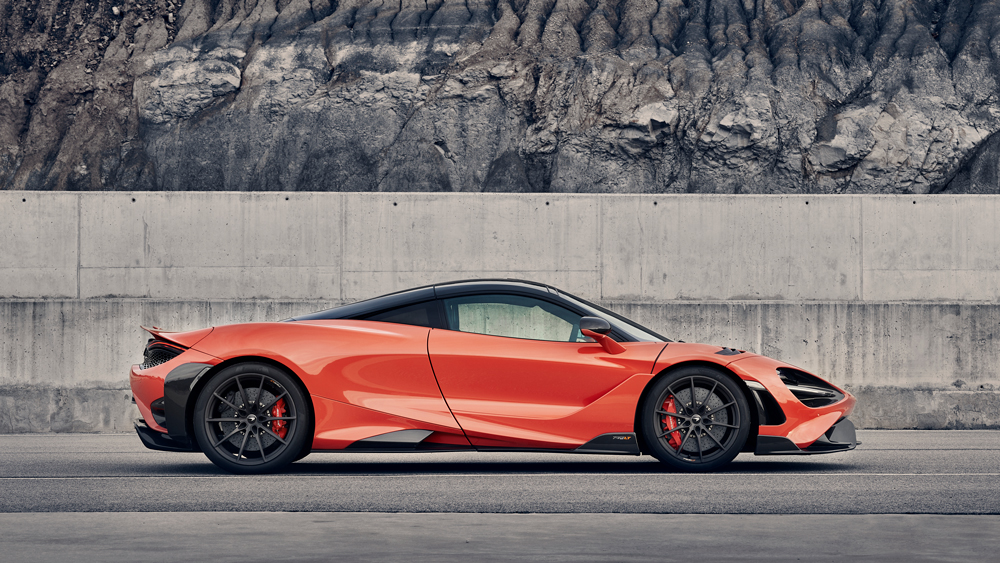 The car’s side blades, which extend from the front wheels and across the doors, help the 675LT create 25 per cent greater downforce than the 720S. Photo: Courtesy of McLaren Automotive Limited.

Once things warm and the athlete gains its stride, however, everything changes—in a flash. Most cars convey a relative sense of velocity, but alarmingly, triple-digit speeds feel like half that in the 765LT, and it’s easy to run afoul of speed limits without even trying. As a habitual user of the rearview mirror, I find it ironic that as the speed increases, the active-aero wing elevates higher and higher, completely obscuring visibility through the rear window.

Drivers will find themselves backing off the throttle more than usual. And that is precisely why this McLaren is a track tool, thinly disguised as a street machine. Sure, it can shuttle from Point A to Point B with the same enthusiasm as Seabiscuit hitched to a 20-mule-team wagon. But for those desiring the sharpest track tool in the drawer, the McLaren 765LT will not disappoint when allowed to stretch its legs in the environment for which it was bred.