The convertible reminds us that it’s the marque’s entry-level offering in price only.

Time with any Aston Martin is an occasion to be relished. The cars from Gaydon are beautiful, rare and always exciting to drive. Certainly, the marque’s historic role as a secret-agent accomplice injects an extra dose of adrenaline for would-be Bonds of every generation, and the latest Vantage Roadster is no exception.

But Sean Connery’s 007 never drove a Yellow Tang Aston Martin. His iconic Silver Birch DB5 would look absurd painted the psychedelic yellow-green colour scheme of our Vantage Roadster, the automaker’s most recent model. The audacious metallic paint amplifies the car’s undulating shape, yet the contrast of its overall sunshine-like colour scheme with black bits, like the aggressive carbon-fibre front and rear splitters or the carbon “bonnet” vents, lends a classic simplicity.

The words “gaping maw” best describe the mesh front grille, still discernable as the traditional Aston Martin outline, but only barely so. Traditionalists will prefer the vaned front grille, which eschews the bold black surround for a body-coloured opening. On our example, the tidy black fabric convertible top (which lowers in a scant 6.7 seconds), AML special black leather interior with bold yellow contrast stitching and 20-inch Snowflake wheels in gloss black complete the look. 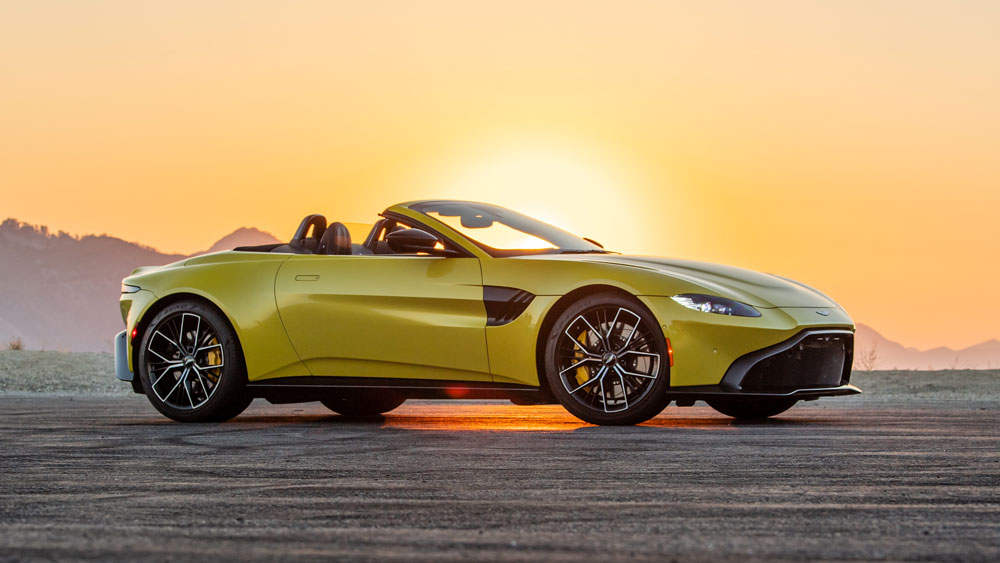 Somehow, the Roadster appears more muscular than the coupe, in part because of the abbreviated greenhouse that puts a greater visual emphasis on the wide rear flanks and upturned tail. If one gets the idea that the added extras on our  Aston Martin are essential, buyers can take comfort in knowing that a very well-appointed Roadster can be had for the base price of $314,635

Between the striking looks and intoxicating performance, it’s hard to believe that the Vantage series is just the gateway drug to Aston Martin ownership. The marque’s smallest and most affordable model might also be the most fun to drive. This can be primarily attributed to its compact size, relatively lightweight (about 1542kg, due to the bonded aluminium frame) and its near 50:50 weight balance, achieved by pushing the engine back toward the firewall.

That engine is a 4.0-litre, twin-turbo V-8 that makes 385kW and 685Nm of torque from between 2000 and 5000rpm; a broad curve that lets drivers exploit the flexible power band and rear-mounted eight-speed ZF transmission. Depending on the level of engagement desired, drivers can slap the large column-mounted paddles or shift automatically, catapulting the Roadster from zero to 100km/h in 3.7 seconds and topping out, we’re told, at 306km/h. 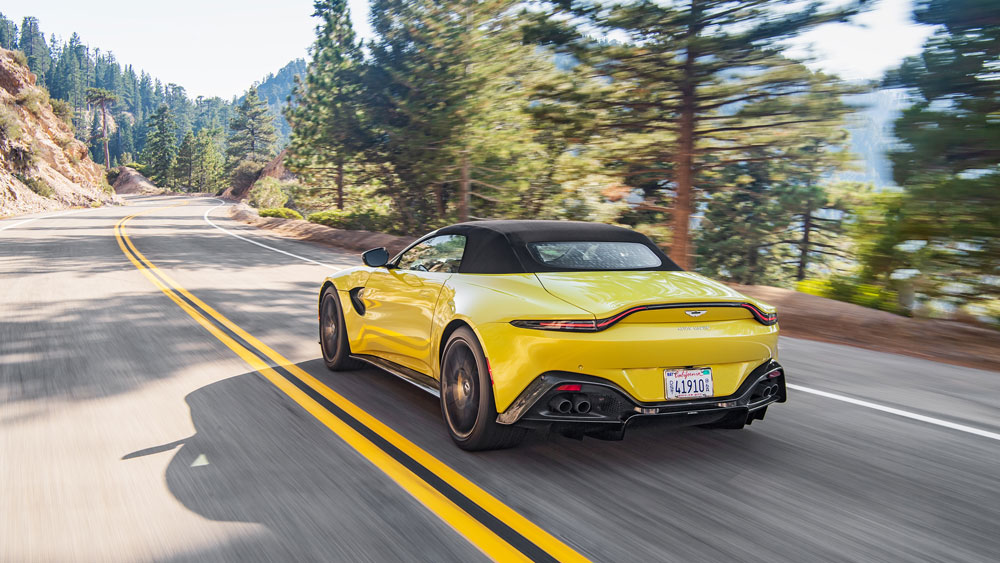 Manual shifts are much fun, especially when the driving mode (selected from the steering wheel) is set to Sport, Sport + or Track, where the Adaptive Damping System (ADS) incorporates Aston’s skyhook technology to optimize suspension.

The Roadster is a raucous creature, with exhaust sounds becoming decidedly more aggressive when the top is lowered. The uproar is guaranteed to entertain its driver; neighbours may be less amused, depending on the day and hour. Standard disc brakes use large steel rotors and need a heavy foot; time behind the wheel provides greater familiarity and finesse. 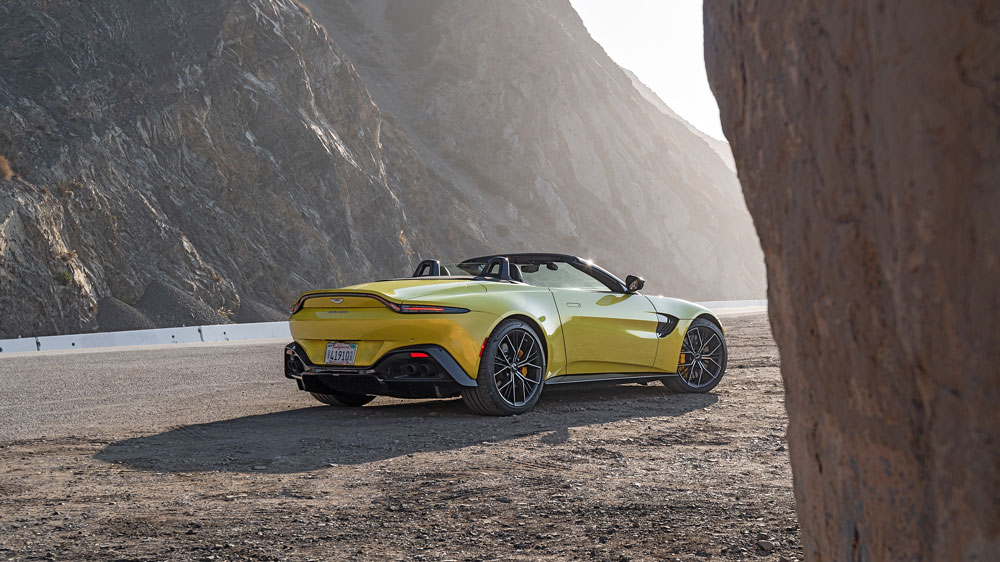 The Vantage Roadster can cover zero to 100km/h in 3.7 seconds and has a top speed of 306km/h. Photo: Courtesy of Aston Martin Lagonda Global Holdings plc.

The fact that the Vantage is strictly a two-seater makes it an appealing proposition for purists, and its interior is a luxurious but purposeful place to be. The thick padded top, when raised, offers nearly as much acoustic insulation as the coupe, which may be irrelevant, given the omnipresence of the Roadster’s delightfully belligerent exhaust note. A wide centre tunnel topped by an 8-inch info screen is flanked with an intriguing sculpted dash that features nice big vents supplying plenty of cold air during infernal So-Cal summers. The bolstered seats are snug, and large drivers should determine whether ingress and egress will not become tedious after the new-car smell and novelty of the swan doors wear off. Like most current cars, the console is festooned with a few too many buttons and switches, so plan on a weekend to crest the learning curve. 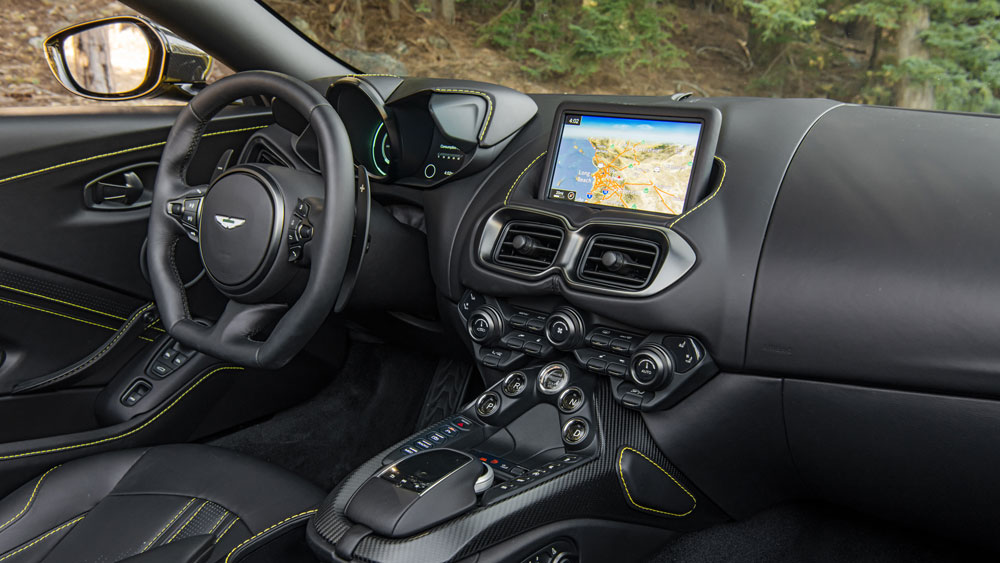 But curves are what the Vantage Roadster is all about, and we enjoyed plenty of them threading Topanga Canyon and Las Virgenes Canyon north of Los Angeles. Aston Martin’s ESC (Electronic Stability Control) includes Dynamic Torque Vectoring and a new Electronic Rear Differential; adding speed and sensitivity to sharpen cornering and handling response, especially over less than pristine surfaces. The double-wishbone front/multi-link rear suspension, combined with the electric-power-assisted steering, made quick work of these winding roads that have been regular routes for this driver for decades. Meanwhile, the Roadster’s high-speed stability and its compliant ride make freeway driving a pleasure.

Hammering on the Vantage Roadster reminds you that a V-8 convertible with rear-wheel drive is a tried-and-true formula for automotive success. It’s easy to make comparisons with other front-engine GTs like the C7 Corvette and Jaguar F-Type, or at either extreme, a Mustang GT or the new Ferrari Portofino M. A garage filled with all five would offer an interesting quintet of options, none with an apology to make. 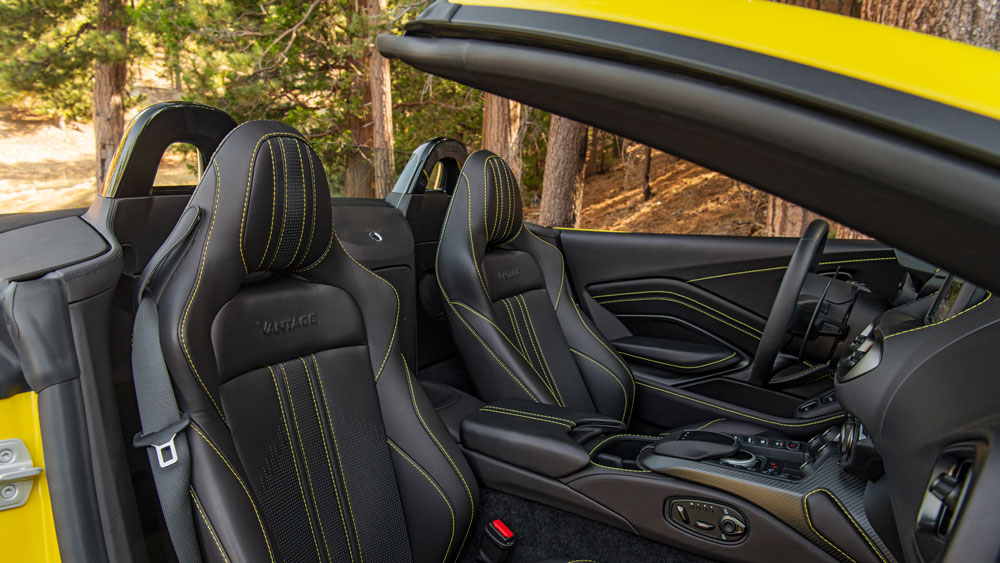 The snug, bolstered seats may pose a challenge for larger drivers when it comes to ingress and egress. Photo by Jessica Lynn Walker, courtesy of Aston Martin Lagonda Global Holdings plc.

Within its price range, however, the Aston Martin Vantage—coupe or Roadster—has some stiff competition, not the least of which is a Porsche with the motor at the other end. But it’s impossible to overlook the appeal of the Vantage Roadster, whose performance is complemented by such seductive looks and tempting rarity as to make it standout everywhere it goes. When the sun and top are down, it’s hard to beat an open stretch of road at speed, belting out the theme from Goldfinger as the Roadster “. . . beckons you to enter his web of sin.”