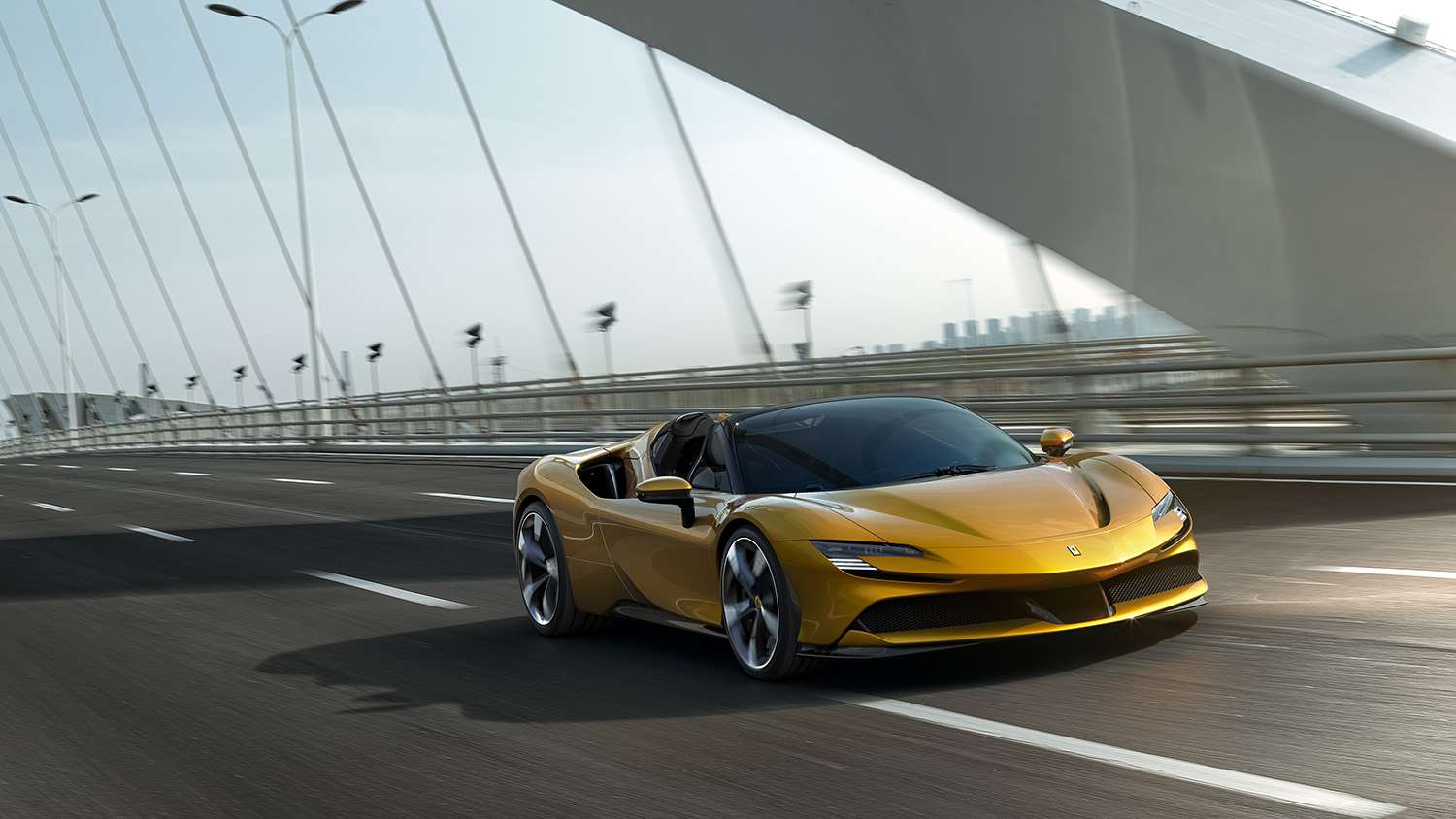 Last year, when the plug-in hybrid SF90 Stradale debuted as Ferrari’s most powerful production car, devotees of the Prancing Horse knew that a drop-top version would soon follow.  The new Ferrari SF90 Spider now leads the marque’s production stable with a combined 746kW, promising an open-air drive experience unlike any other.

Similar to the SF90 Stradale, a street car named to honour the Scuderia Ferrari racing team’s 90th anniversary, the four-wheel-drive SF90 Spider carries three electric motors—combining for 165kW—paired with the most muscular turbocharged V8 in Ferrari’s history. The 581kW combustion engine contributes to a total output that improves upon the Stradale by 10kW. 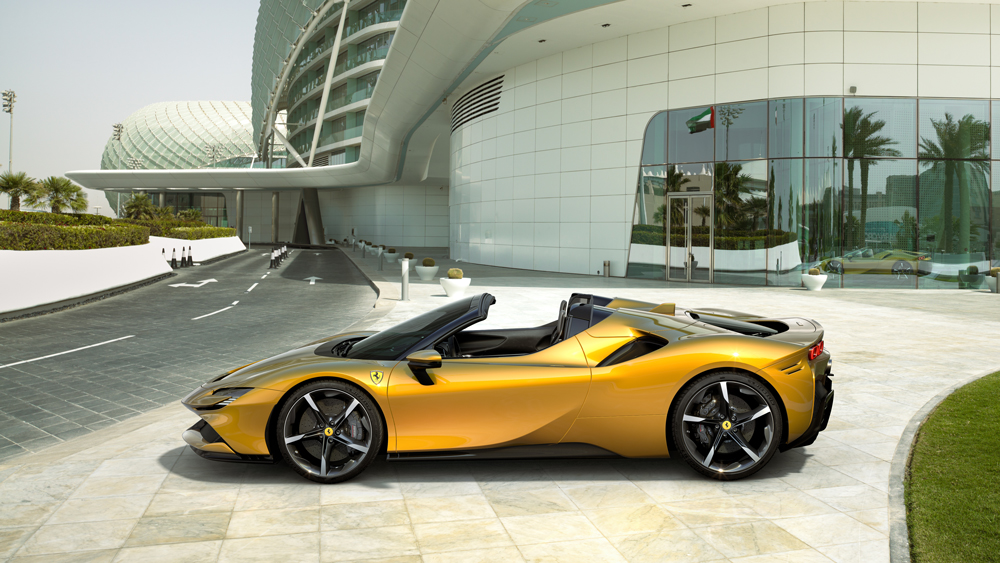 Managing the power plant, including 800Nm of torque, is the same eight-speed dual-clutch transmission introduced in its sibling, a gearbox that can execute shifts in 200 milliseconds—that’s 30 per cent quicker than its seven-speed predecessor, and it’s nine-kilograms lighter. The convertible has performance specs on par with the coupe, able to cover zero to 100km/h in 2.5 seconds, topping out at 340km/h. Those numbers are more impressive considering that the car’s 1645kg is more than 100kg heavier than its closed-top counterpart.

“If you talk about the stiffness and rigidity of the car, we have sustained the performance of the coupe,” said Michael Leiters, Ferrari’s chief technical officer, during the unveiling. “This is why we already considered the spider version during the coupe’s development.” Of the weight increase, Leiters explained that approximately 80 per cent is attributable to the retractable hardtop and its operating system—which allows the roof to open or close in just 14 seconds—while the remaining 20 per cent or so is due to “damping materials used to increase the rigidity of the spaceframe.” 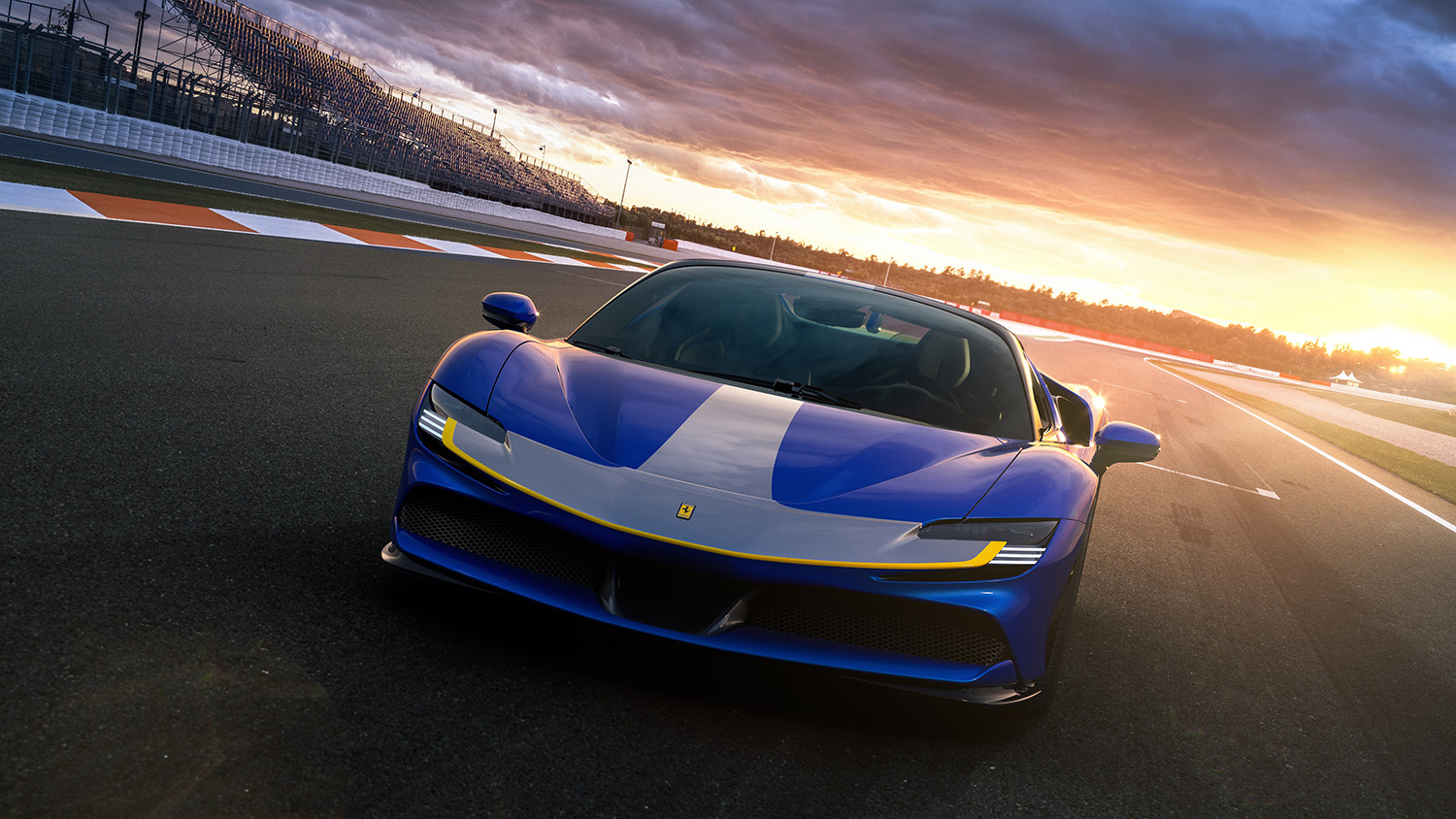 The convertible covers zero to 100km/h in 2.5 seconds and tops out at 340km/h. Photo: Courtesy of Ferrari.

The vehicle’s driving dynamics are enhanced by Ferrari’s latest generation of assists, including electronic traction control and torque vectoring, but now includes a brake-by-wire control that splits braking responsibility between the hydraulic component and the electric system’s regenerative setup. “We can decide in every moment how much we want to brake with the hydraulic system and how much we can brake with the regenerative system,” said Leiter, adding that brake-by-wire offers a three per cent improvement over standard hydraulic brakes alone.

Also introduced is a plug-in-hybrid-specific selector gauge on the steering wheel (in Ferrari-speak, the “eManettino”) which offers four modes: eDrive, allowing for all-electric operation; Hybrid, for optimized use of the V8 and electric motors; Performance, which prioritizes the V8; and Qualify, mating full power from the electric motors with the combustion engine. 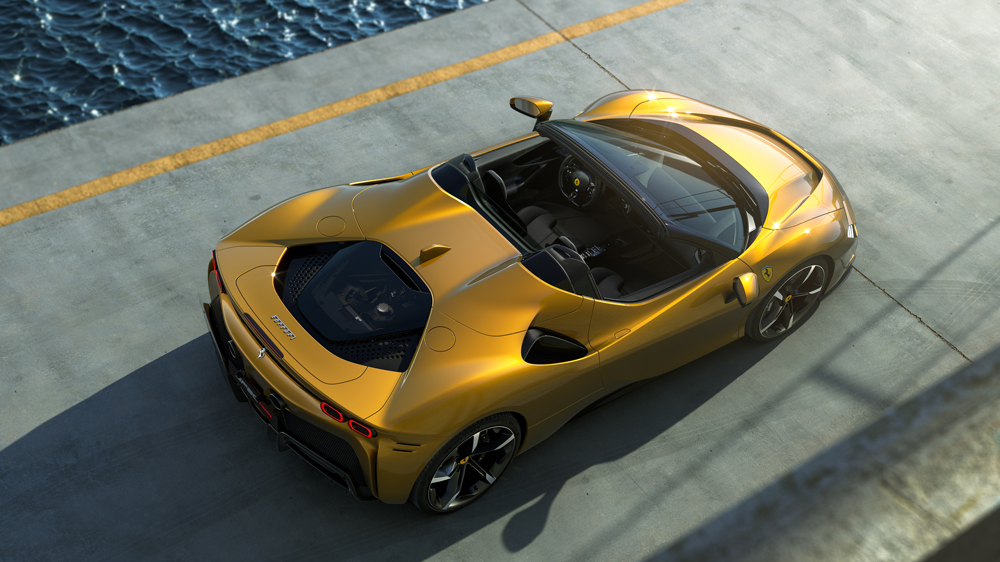 On the aerodynamic front, three key elements stand out. At the back, the shut-off Gurney is an active aero component that automatically adjusts to deliver low drag or high downforce, as needed, while the front features a straked underbody which also increases downforce. Meanwhile, a newly developed forged wheel offered Ferrari’s chief design officer Flavio Manzoni and his team yet another way to achieve aero efficiency.

“This wheel is based on a very innovative system, which has been patented, that optimises air flow and also reduces the pressure inside the wheel arches,” said Manzoni of the wing-like configuration. “At the same time, it has been a fantastic opportunity to create a completely different design.” 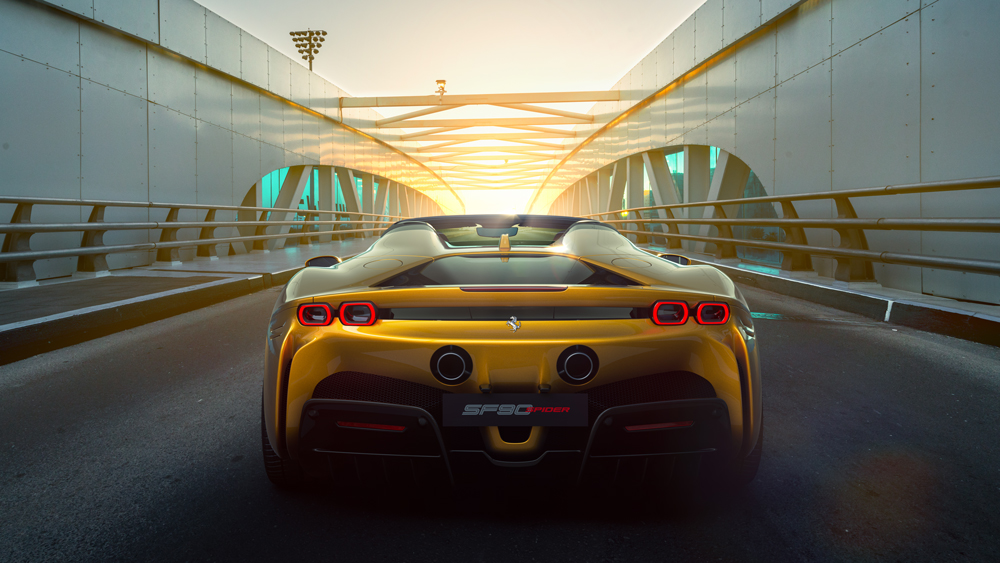 An active aero component at the back automatically adjusts to deliver low drag or high downforce as needed. Photo: Courtesy of Ferrari.

The interior also afforded an opportunity to implement a new look, most noticeably the head-up display. Also aiding the driver are touch controls, from power-mode selection to screen navigation, easily accessed on the steering wheel spokes.

For its track-focused clientele, Ferrari is offering the Assetto Fiorano package that comprises motorsport-derived shocks, Michelin Pilot Sport Cup 2 tires and a further 21-kg weight reduction thanks to more carbon fibre and titanium. That trim choice will be set apart visually with a dual-tone paint scheme. 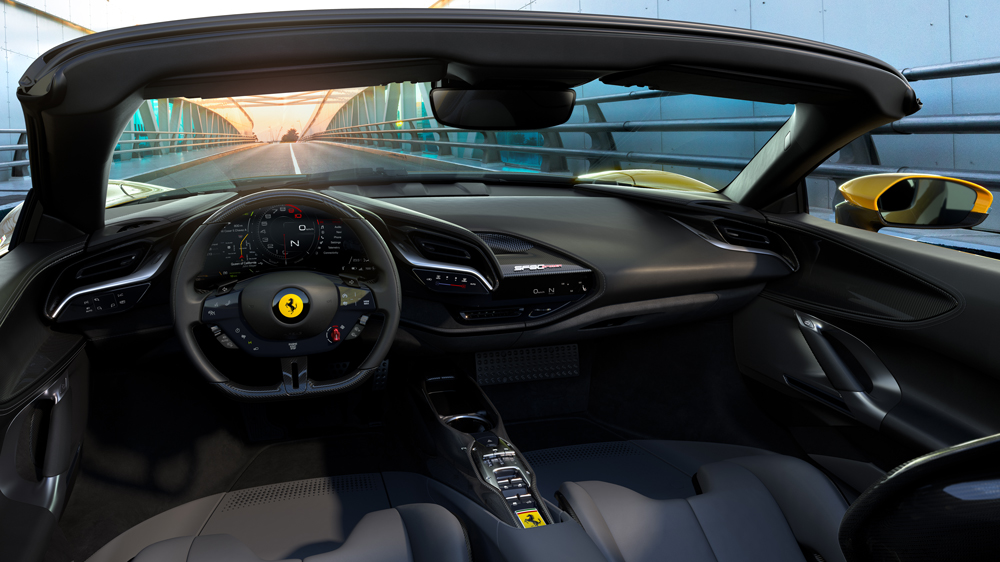 The interior presents a head-up display for the driver and easily accessed touch controls on the steering wheel. Photo: Courtesy of Ferrari.

One of Ferrari’s aims with the SF90 Stradale and the SF90 Spider is to offer its repeat customers a level of performance previously reserved for a select few, with rare models like the LaFerrari and its Aperta variant. The plan seems to already be paying off. “The number of new Ferrari [customers] that have been attracted by the SF90 is much higher than expected,” stated Enrico Galliera, Ferrari’s chief commercial and marketing officer. “We have reached a number close to 50 percent so far, and the number entering is younger versus the average age of new clients in our product range.” 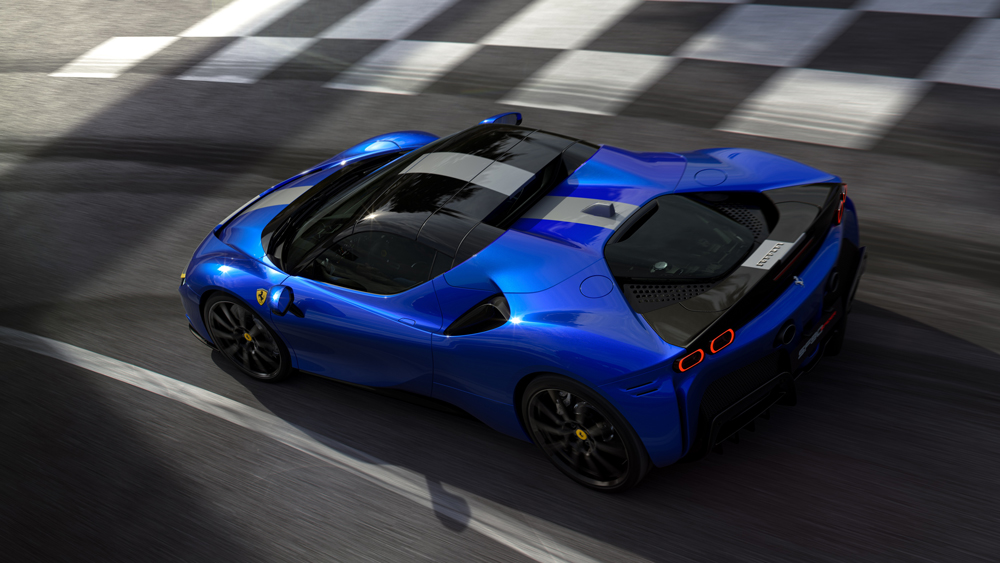 The SF90 Spider with the Assetto Fiorano trim package. Photo: Courtesy of Ferrari.

Part of this draw may be the plug-in component but, unlike Bentley, which recently announced that its entire lineup would be all-electric by 2030, Ferrari is not ready for that kind of commitment. “There’s no doubt that the market is moving towards the electric technology, and we cannot deny this direction,” Galliera acknowledged. “To answer the question about the fully electric vehicle . . . we don’t see, in the short [term], a potential application for Ferrari. Probably in the future, yes. But we still don’t know exactly when the technology will be ready for us.”

Meanwhile, cost and delivery Australia has yet to be announced but expect it north of its $846,888 sibling. The SF90 Spider is next-level hybridization from an automaker built on raising the bar.