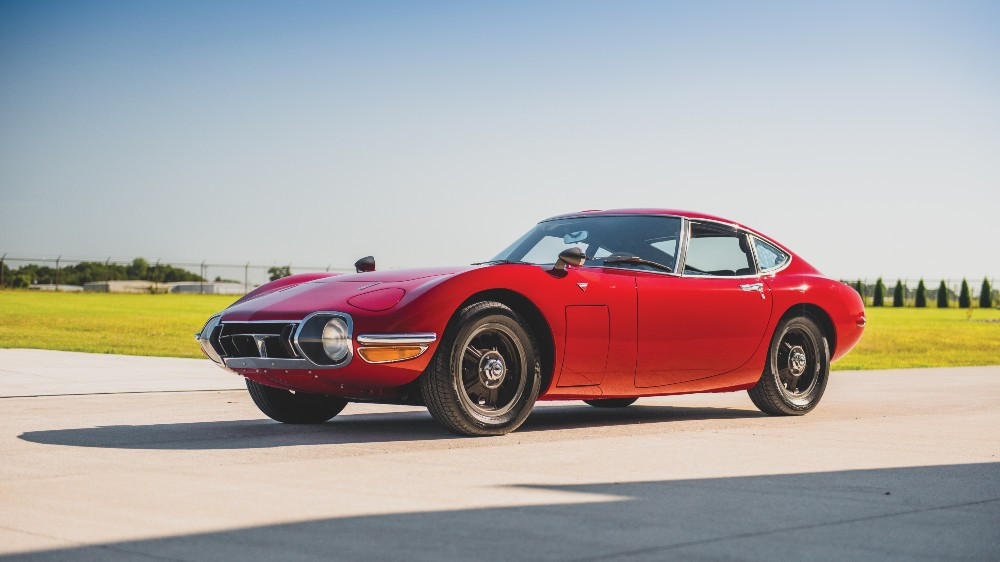 Could This 1967 2000GT Become The Most Expensive Toyota In History?

It’s a good time to be a fan of Toyota’s sports cars. Last year, we saw the return of the Supra after a long 17-year absence, and now an exceedingly rare 1967 2000GT, easily one of the brand’s most iconic vehicles, is heading to auction.

In May, a beautiful Solar Red example of the company’s very first sports car will go up for sale as part of RM Sotheby’s Elkhart Collection event. One of just 351 units sold worldwide, the 2000GT is quite possibly the single most significant Japanese automobile ever produced, according to the auction house.

It’s easy to see why the 2000GT, which was developed in collaboration with Yamaha, is such an important part of Toyota’s history. This specific example—chassis number MF10-10100 and body number 1090—is a truly eye-catching coupé with a simple yet timeless aesthetic dreamt up by legendary designer Raymond Loewy. The elegance continues inside the car, where a black leather interior is offset by a stunning rosewood dash and wood rim steering wheel. Things aren’t so bad under the hood, either; you’ll find an inline-six mated to a five-speed manual transmission capable of producing 111kW. While it may not compare to the Supras of today, it’s still going to be plenty of fun to drive.

This particular 2000GT was owned by famed American race car Otto Linton for over 30 years, according to RM Sotheby’s. Since then, it’s been meticulously restored by noted specialists Maine Line Exotics, who took special care to make sure its stunning Solar Red paint job looks as pristine as it did in the ‘60s.

While the auction house hasn’t listed a sales estimate for the car, it seems fair to say that it will end up going for a whole lot more than its original $10,500 price tag. In addition to its rarity, the market for 2000GTs has been robust in recent years, with the cars regularly selling for in excess of $750,000. This one, gorgeous as it is, could even top the $1.75 million a yellow version sold for in 2013.

The 2000GT is scheduled to hit the block, without reserve, during the auction house’s two-day Elkhart Collection event on May 1 and 2 in Elkhart, Indiana. In addition to the Toyota, other notable lots include a 1937 Cord 812 Supercharged Cabriolet, 1955 Mercedes-Benz 300 SL Gullwing and a 2006 Ford GT Heritage.