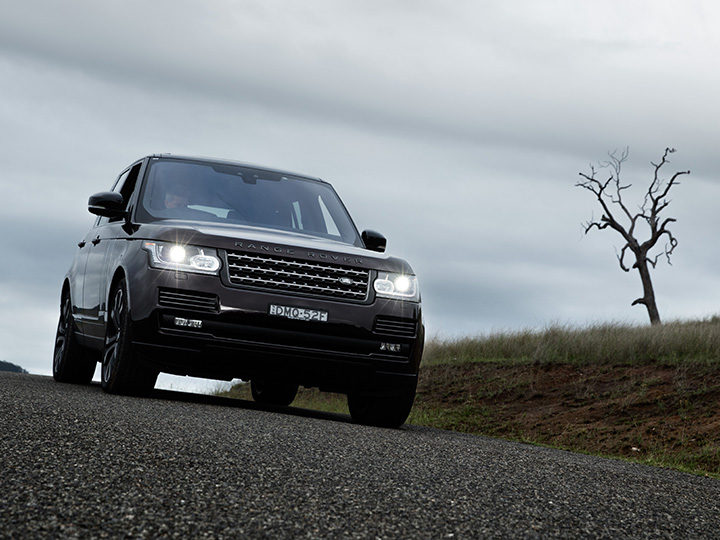 Writing the next chapter for Range Rover

The king of the road – and still, arguably, ‘off’ the road – is being challenged for its crown, yet the Range Rover is neither ready to abdicate nor be dethroned.

One may view Land Rover’s new SVAutobiography Dynamic variant as a direct response to the Bentley Bentayga, as it blends the luxuriousness of the long-wheelbase SVAutobiography flagship with the sportiness of the Range Rover Sport SVR.

The Dynamic, priced at $316,000 to mirror its in-betweener status, is also the work of the Special Vehicle Operations (SVO) division charged with creating faster or more bespoke Land Rovers (and Jaguars). If such a model seems paradoxical for this most famous of palatial off-roaders, Land Rover says there had been requests from customers for a full-size Rangie with enhanced handling. In their view, the Sport SVR, however fast, didn’t have the requisite cachet. SVO engineers took the short-wheelbase version of the SVAutobiography (now discontinued in Australia) and lowered its ride height a fraction, modified its springs and dampers, tweaked the auto-adjusting anti-roll bars, and quickened the steering slightly. A Graphite Atlas finish is applied to elements including the grille, side vents and front bumper, the tailgate bears an SVAutobiography badge rather than the green Land Rover oval, there are four exhaust pipes, and more aggressively styled wheels showcase prominent red Brembo brake calipers. Exclusive paints such as the SVR’s Estoril Blue or the SVA’s two-tone scheme aren’t available, so it’s a case of picking from the huge palette of standard or custom colours available across the range. Our test vehicle was coated in a plummy, $8500 metallic gloss called Ruffina Red. The beautiful and bountiful details also include a stitched-leather owner’s manual matched to your selected interior trim, of which there are four choices. Knurled-metal highlights have mixed results. They look fine on the transmission’s and Terrain Response’s rotary dials, but look gaudy on the surrounds for the engine start/stop and glovebox buttons. Updated for MY17, the system impresses with the 10-inch touchscreen’s presentation and pinch/swipe, tablet-style functionality, though it can frustrate with its slow response to finger inputs – especially when keying in destinations for the navigation.

New driver aids such as 360-degree view, lane-keep assist, blind-spot monitoring, fatigue alert, semi-automatic parking and low-speed autonomous emergency braking are other welcome technologies – although outward vision has never been a shortcoming in 48 years and four generations of Range Rovers.

This latest car’s classically tall glass continues to provide a commandingly majestic view, while its renowned off-roading ability isn’t hindered in any way by its sportier focus. The long and the short of it, however, is that there’s less familiarity between the two SVAs when you start rolling along. If the Range Rover is the jewel in Land Rover’s crown, the Dynamic comes with industrial-grade hardened gems. Around town, the sportier Rangie’s stiffer ride transmits bumps and other surface irregularities directly to your seat, while at higher speeds on country roads the Dynamic jostles, rather than coddles.

We’re less inclined to lay any blame with the optional 22-inch wheels fitted to our test car (in lieu of the standard 21s), as the SVR on same-size rims provides a more compliant experience.

Indeed, in the context of nearly five decades of plush Range Rovers, the Dynamic’s ride quality is relatively uncouth. Thankfully, there’s a more relaxing gait on freeways and smoother surfacing provides greater encouragement for discovering more assured body control through fast corners. Mild understeer is easily manageable, in a model that misses out on the SVR’s trajectory-assisting torque-vectoring system.

If the steering doesn’t feel especially sharp, it balances ease of effort with good weighting and consistency.

And there’s nothing lightweight about performance. Utilising that 5.0-litre supercharged V8 from the SVR and SVAutobiography, the Dynamic bounds along in almost arrogant defiance of its 2.5-tonne mass.

The bent-eight’s soundtrack progresses from a low-key rumble to an ear-bending snarl as revs rise, with momentum aided by plump torque and a ZF eight-speed auto that is seamless, whether you’re using those red paddles or leaving the transmission to make its own judgments. Throttle response is at its best with the transmission dial turned to S, where it can still be somewhat hesitant at lower revs despite the engine’s having a mechanically driven supercharger.

SVAutobiography Dynamic buyers must also accept that a 0-100km/h acceleration time of 5.5 seconds, while worthy, is slower than both the $100,000-dearer Bentayga (5.1 seconds) and $100K-cheaper SVR (4.7 seconds).Litres of fuel consumed will inevitably run deep into double figures if you drive the Dynamic dynamically, though a 105-litre fuel tank helps to limit visits to service stations.

As the Range Rover roams towards its 50th-anniversary destination, 2020, its status as automotive royalty remains undisputed. One just needs to be mindful that this Dynamic version’s less than regal ride may demand that one maintain a stiff upper lip.