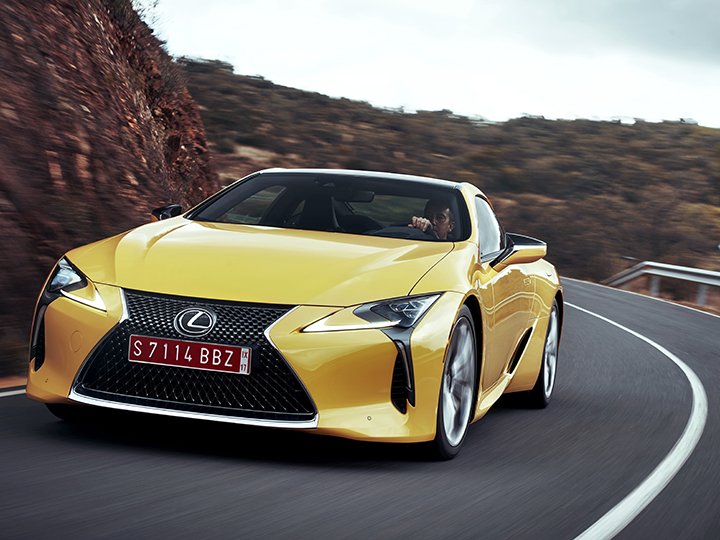 We knew very well the production model wouldn’t be so imposingly broad, spectacularly sleek or exquisitely detailed as the eye-watering concept. Yet, here we are.

If the boldness and brilliance of Lexus’ LFA supercar of 2010 didn’t quite rub off across the Japanese brand’s blue-rinsed mainstream range, there’s a new technological tour-de-force poised to change both the way Lexus cars drive and people’s view of the marque.

Calling the LC a “Luxury Sports Coupé” is not a means of tempering expectations, but rather a succinct summary of what Lexus set out to create. On the strength of Robb Report Australia’s first overseas drive, its goal has been largely achieved.

When the public first laid eyes on the Lexus LF-LC concept in 2012 at the Detroit motor show (and in Sydney later the same year), Lexus had no intention of putting the car into production. Even if it had, we knew very well what would happen: as a mass-produced model, it wouldn’t be so imposingly broad, spectacularly sleek or exquisitely detailed as the eye-watering concept. Yet here we are, precisely five years later, drinking in the smouldering form of the production LC – having just had our first taste on a race circuit, ahead of the model arriving on Australian shores in the middle of this year.

As well as being an accomplished and luxurious sports coupé, the LC signposts the Japanese luxury brand’s growing ambitions and provides a first taste of the GA–L (uninventively, ‘Global Architecture – Luxury’) underpinnings that will feature beneath all future front-engine, rear-wheel-drive Lexus models. This machine is all-new, mechanically and ideologically.

“Front-mid” – that is, a front engine, but wholly behind the front axle line – describes the location of the LC 500’s 5.0-litre, DOHC, naturally aspirated V8, which it shares with the RC F coupé and GS F executive-express. In the tradition of well-balanced sports machines, this location helps distribute 52 per cent of the coupé’s weight over the front wheels and 48 per cent over the rear. The LC’s 10-speed torque converter automatic is a world first, in place of the electronic dual-clutch system typically found among European rivals. Lexus says it’s smoother and capable of shifts that are just as quick.

A sister to the regular LC 500, the petrol-electric LC 500h is powered by Lexus’ next-generation Multi Stage Hybrid system, incorporating a 3.5-litre V6 and 45kW electric motor. It delivers its output to the rear wheels through a four-stage transmission with a ‘shift control pattern’ to make it feel like a normal automatic, without the typical CVT drone and saggy-elastic response to the accelerator.

However, it’s the LC 500 that best fits the model’s personality and aspirations. That’s at least until the arrival of a twin-turbocharged LC F version. When one considers the cars against which the LC was benchmarked – the Porsche 911, for one – and the high-performance landscape into which it’s painted, this heavily rumoured development is almost certainly only a matter of time.

Lexus and Toyota president and CEO, and now Lexus chief branding officer and master driver, Akio Toyoda’s passion and uncommonly hands-on approach come through loud and clear in the LC.

On Toyoda’s watch, a concerted engineering effort went into translating the concept car’s presence into the production coupé’s crisp pressed metal. The LC stretches the brand’s electric-razor grille (and detail fussiness) across a broad two-door body, perched on a long 2870mm wheelbase, with short front and rear overhangs, a super-fast roofline and muscular haunches. The wheel arches are filled by 20- and 21-inch wheels and tyres.

An active rear spoiler could be a gimmick, though the carbon-fibre roof and aluminium door skins and suspension arms imply serious sporting focus. In spite of them, the coupé still nudges two tonnes.

Extensive high-strength steel in the structure, says Lexus, gives the LC a stiffer body than any preceding Lexus model – including, unbelievably, the carbon-fibre LFA. The driver’s hip point is said to be aligned with the coupé’s centre of mass, one of many measures designed to make the LC feel right. Many of the available trim colours and the beautifully double-stitched, semi-aniline leather on most surfaces in the cabin suggest grand touring, with cool-to-touch magnesium paddle shift levers and cramped plus-two rear seats as reminders of the model’s dual purpose.

A rotary dial sprouting from the right of the instrument binnacle serves a selection of driving moods, from Comfort to Sports+, which provides a flamboyant burst of V8 noise during downshifts, stiffens the suspension and sharpens the big coupé’s responses.

The automatic is enlivened, too, though its closely stacked set of 10 ratios already provides rapid fire urgency and a tick-over highway hush, by dint of having three more ratios than most.

The LC 500 is not as thumpingly urgent as the turbocharged European establishment, and it says plenty about today’s sports car stakes that, at 4.5 seconds from 0-100km/h, the LC is merely quick in this competition.

If making the right noises is important, the 5.0-litre certainly satisfies. A rich, full-blooded baritone signals a flattened accelerator pedal. It pours from the tailpipes and, with acoustic assistance, into the cabin via the engine’s intake. The linearity of natural aspiration makes the 351kW V8’s fire of the friendly kind.

The company’s claim that triple the usual amount of tuning time went into developing the new coupé’s chassis is entirely believable. The weighty steering feels like the work of another maker altogether – as does Akio Toyoda’s pet-project Toyota 86 against a common-or-garden Corolla – and it’s this quality that marks the LC 500 as a real departure from any previous Lexus, excepting the LFA. The taut monocoque provides the tangibly rigid structure for nicely balanced rear-wheel-drive handling, wherein subtle pushing of the front end is easily countered with a brush of the brake, or on the throttle via the limited-slip differential from mid-corner to exit.

There’s no disguising the LC’s significant weight on change of direction and when leaning hard on the left pedal after a big speed, yet the plus-sized two-door is ultimately agile and easily arrested.

The race-car engine note might be enough on its own – or at least, the icing – to entice a new breed of customer to the brand. But much deeper than that sonic satisfaction, the LC is surprisingly cohesive and rewarding as a complete coupé package.

The flipside of the Luxury Sports Coupé tag is that Lexus’ historical focus on comfort and quietness also carries into this new chapter. The LC is without question an enviably smooth and refined grand touring machine.

Given Lexus’ new resolve, the dynamic qualities that set the LC apart from any mass-produced model in the brand’s 27-year history have a better chance than ever before of filtering down to other Lexus models.