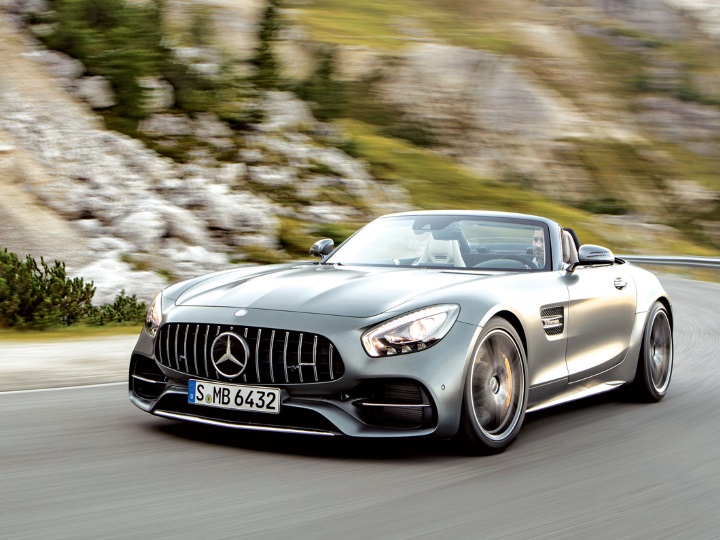 Rolling in a Mercedes-AMG GT C Roadster with the boss

The head of Mercedes-AMG tests the brand’s upcoming convertible in the Nevada desert.

This past autumn, about a year before the scheduled on-sale date of the Mercedes-AMG GT C Roadster (mercedes-amg​.com), I was in the Nevada desert on a hot and sunny afternoon riding shotgun in a prototype of the open-air hot rod. Mercedes-AMG chairman Tobias Moers was at the wheel.

It's cool and rainy in Moers's native Germany at that time of year, so he and the car were in the Silver State, where he could personally validate its driving dynamics in convertible-friendly conditions while the onboard logging equipment collected data for the AMG engineers to study. He wanted to ensure that the GT C Roadster sounds, feels, and responds exactly as it's supposed to when you drop the top and take it for a ride on an open road. The 4-litre twin-turbo V8 blasted, crackled, and barked as Moers negotiated a sinewy stretch of highway. "It has to sound and feel natural," he said. "It's a big task." The car's performance was impressive, but it wasn't quite ready to receive Moers's blessing. After the ride, he mentioned that the steering needed further fine-tuning, although I certainly couldn't detect any imperfections from the passenger seat.

With a 410kW engine, the GT C Roadster is only a little shorter on muscle than the 430kW GT R coupe, which is scheduled to go on sale later in 2017. Like that model, the GT C Roadster features four-wheel steering, an adjustable coil-over suspension, an electronic differential, and a race mode that calibrates the 7-speed dual-clutch transmission for track driving. The GT C Roadster also shares the GT R's active air-management system, which features electronically operated louvres behind the grille that open to help cool the engine when needed. When shut, the louvres enhance the car's aerodynamic efficiency. The zero-to-100km/h time is 3.7 seconds, and top speed is 315km/h.

The GT C Roadster is the more powerful of the two forthcoming Mercedes-AMG GT convertible variants. (Prices for the models have not been announced.) The 350kW GT Roadster still packs more punch than the currently available GT coupe, but it is also about 55 kilograms heavier because of the body bracing that's needed to maintain rigidity in the absence of a roof. The GT Roadster can reach 100km/h from a standstill in 3.9 seconds and achieve a top speed of 303km/h.