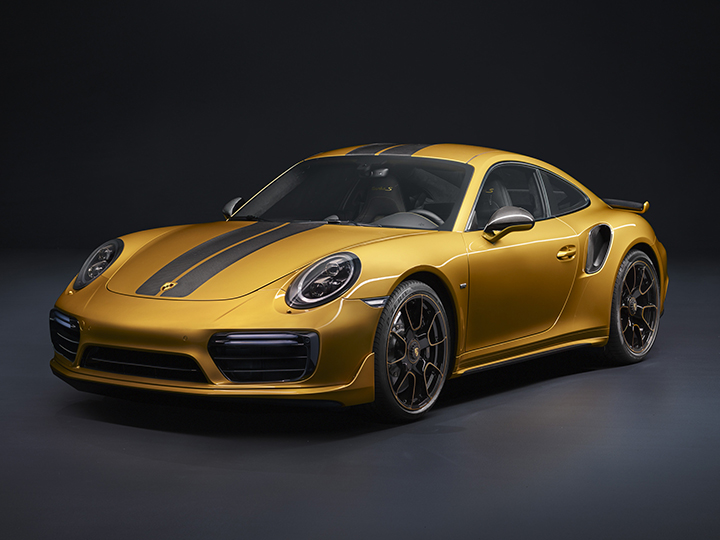 Porsche goes for gold with most powerful 911 Turbo S ever

Porsche has just launched what it says is “the most powerful and unique 911 Turbo S ever”. Well, now you have our attention.

Porsche has just launched what it says is “the most powerful and unique 911 Turbo S ever”. Well, now you have our attention.

The 911 Turbo S Exclusive Series bumps power from the 3.8-litre, bi-turbo flat six layout by 20kW to a stonking total of 446kW – but they’re just numbers until you put it to the ground, something Porsche has proven extremely adept at. A claimed 0-100km/h time of 2.9 seconds and 0-200km/h of 9.6 seconds on the way to a top speed of 330km/h suggests this 911 is going to become very highly sought-after, very quickly. There’s more to the Exclusive Series story than a more-powerful engine. Fettled by the in-house new Porsche Exclusive Manufaktur team at the Zuffenhausen headquarters, this 911 Turbo S draws on higher-quality materials and luxurious details, and can be further tailored to the customer’s exact wishes.

It is the first example of Porsche Exclusive Manufaktur, which will specialise in bespoke Porsche modifications. “The range of services available also includes advising customers, developing special equipment options for each model range and producing limited production runs,” Porsche said in a statement. Standard touches for the 911 Turbo S Exclusive Series include black-painted, central locking 20-inch wheels laser-etched with a metallic highlight to match the ‘golden yellow’ paintwork; black-painted callipers for the ceramic brake system with the Porsche logo in golden yellow metallic; lightweight carbon-fibre components including the bonnet, roof, side skirts and ram-air scoop; carbon-weave stripes contouring the roof and bonnet; a new rear apron; two twin stainless steel tailpipes in black; and Exclusive plates on the wings. Only 500 examples of the car will be built, which will be priced at $590,700 (plus on-road costs) for Australian customers.