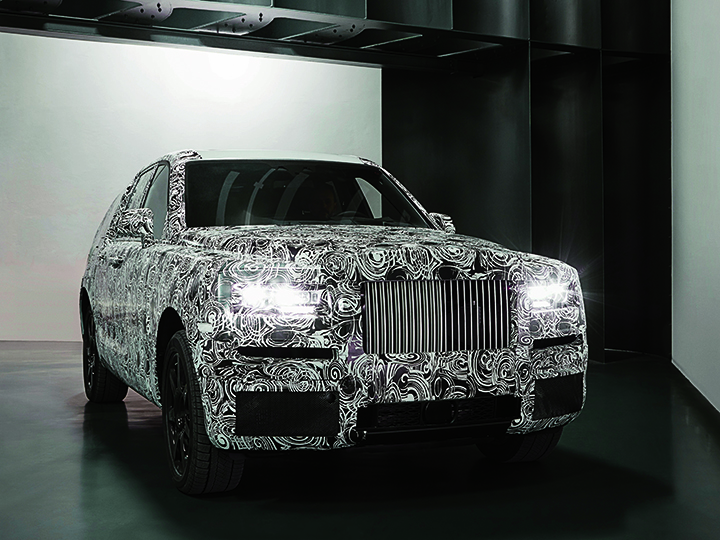 A black Bentley Bentayga pulled up outside my house a few weeks ago. I’d known for months that it was only a matter of time. Our home is within a few hundred metres of our daughters’ school, which conveniently means that for us, the ‘school run’ is actually a five-minute walk. But our particular Sydney location-location-location also means that our street is a showroom of luxury SUVs on twice-daily rotation.

Black and white is the dominant palette. But more noticeable is the variety of marques now represented. The top-end Range Rovers (Autobiographies and Sports, mainly), a staple since forever, now vie for popularity with the Porsche Cayenne, Mercedes GLS and GLE and, for some reason, the superseded (rather than the newest) Audi Q7.

Among these is a smattering of slightly off-piste alternatives, including a couple of matt-black Mercedes AMG G63s, a few Mercedes R-Classes (one of them ours, on rainy days) and a couple of Lexus LX570s. Despite the newly added Bentley, there’s still no contest for the coolest school-run four-wheel drive (4WD) wagon: a black, daily-driven Ferrari FF. Still, the Bentayga (above) is just the beginning. Where currently Bentley is the only truly upper-luxury marque dipping a John Lobb desert boot into the SUV space, in the next few years I know I’ll be looking out my window at likewise unprecedented super-luxe trucks from Lamborghini, Aston Martin, Mercedes-Maybach and yes, even Rolls-Royce.

Let’s reflect briefly on where all this began. In 1950, the Rover car company, having launched the Land Rover only two years earlier, hatched the idea of a ‘Road Rover’. That project never reached production.

The 1963 launch of US rival Jeep’s family-oriented Wagoneer jolted Rover into developing what would eventually become the Range Rover. Crucially, this new vehicle was to target passenger-car buyers, not price-sensitive farmers.

When the Range Rover appeared in 1970, it boasted a specification unprecedented among ‘utility’ vehicles, such as its 3.5-litre V8 engine, coil-spring suspension and costly constant-4WD system. By the early ’80s, the Range Rover was available with four doors and eclipsed many luxury sedans in passenger comforts. Manufacturers of utility-based 4WDs began stepping up their equipment levels. In Australia, their acceptance was accelerated by an import tariff regime that advantaged these ‘commercial’ vehicles.

A seven-seat carrying capacity is a key attraction for many SUV models. A universal attraction, however, is the driver’s commanding sightline over the traffic. Well, perhaps not any more.

Despite increasing opposition, the Range Rover effectively had a market niche to itself; much like the Porsche 911’s among sports cars. Indeed, Porsche knew this only too well when, in the ’90s, it chose to enter a second vehicle category to reduce its dependence on the fickle sports car segment. Its research showed that a majority of its 911 owners had, as their other car, a high-ticket SUV; not infrequently a Range Rover.

Porsche’s Cayenne, launched in 2002, further helped to focus rivals’ attentions on the road-going aspects of luxury SUVs. But the Cayenne was also a precursor in that its ‘platform’ – the manufacturing parameters of its chassis, suspension and drivetrain – would be shared (with the Volkswagen Touareg).

The amalgamations of luxury brands and the proliferation of platform and component sharing have helped make viable these new, niche adventurers. Lamborghini’s Urus (above), due next year, shares its basic platform with the Bentayga (a cousin in the Volkswagen family), but will steal its title of world’s fastest SUV, thanks to a twin-turbocharged, 485kW V8. A sister Urus Hybrid will borrow technology from Porsche. The Urus’ most direct rival will likely be the Aston Martin DBX (above), arriving a year or two later. Despite the British brand’s technological ties with Mercedes-AMG, Aston Martin says the DBX will be all-Aston, using architecture derived from the DB11. The DBX may even retain the two-door coupé silhouette previewed in concept form two years ago.

Pre-dating its first M-class (1997), Mercedes-Benz had legitimate off-road form in the G-class Geländewagen. In recent years, this slab-sided ’70s design has been increasingly gentrified. In March this year, it appeared as the Mercedes-Maybach G 650 Landaulet (above), powered by a 6.0-litre, twin-turbo V12 and priced at well over $500,000. Just 99 examples will be made. But the most intriguing of these SUV newcomers will be Rolls-Royce’s first four-wheel-drive model in its 111-year history. Currently known as ‘Project Cullinan’ (above) and due for launch in late 2018, the high Roller is sharing its platform and V12 engine with the next-generation Phantom limousine.

Among these newcomers, watch for Lamborghini and Rolls-Royce to invoke some obscure off-road history. In the late-1980s, Lamborghini produced just a few hundred examples of an off-road monster called the LM002. Sinfully ugly (at least until the US Hummer came along), the legitimately V12-powered, land-roving Lambos are much prized today.

And Rolls-Royce? There’s never been a 4WD, but the company’s earliest cars proved their toughness and reliability in off-road trials, which led to the production, at the outbreak of World War I, of 120 Rolls-Royce Armoured Cars.

The most famous commendation of these would come from Lt Col T. E. Lawrence – yes, that Lawrence of Arabia – who had a unit of nine of them in his assault on Egypt. Lawrence proclaimed the rugged Rolls “more valuable than rubies” in his daring adventures.