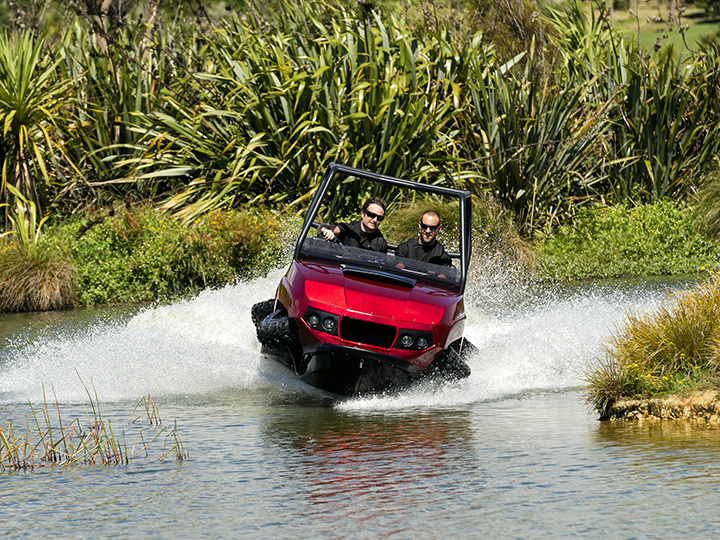 Half a car, half a boat, and all of the thrills

The versatile TerraQuad prototype is no amphibious Lotus Esprit, but it does provide the best of both worlds.

When Roger Moore drove his Lotus Esprit off the end of a jetty on Sardinia’s Costa Smeralda in the 1977 film The Spy Who Loved Me, it was every Bond fan’s automotive fantasy come to life. A sleek sports car that rapidly transformed into a submarine teased as the ultimate amphibious experience – albeit too obviously a fictional one.

Although creating amphibious vehicles equally at home on land and water has been the dream of many inventors, reality has brought more compromise than competence: think the Dr Porsche-developed Volkswagen Schwimmwagen of World War II, or the likewise German-built novelty Amphicar of the ’60s. Its latest prototype unveiled at the recent MTA100 Car Show of the Century in Wellington is the Terraquad – an amphibious two-passenger Utility Terrain Vehicle (UTV) that can reach 80km/h on land and 72km/h on water. It’s hard to say which is the more impressive.

As a drive-on/drive-in proposition, the Terraquad transforms at the flick of a switch into a fast watercraft in less than five seconds. A 104kW BMW K1300 four-cylinder motorcycle engine drives the rear wheels on land and likewise powers the jet propulsion on water. While the Terraquad is a prototype for showcasing Gibbs’ HSA technology – for which it holds more than 350 patents and patents pending worldwide – the company already has the runs on the board to prove the technology works.

Gibbs Amphibians initially came to attention in 2004 when its first product, the three-seater Aquada, crossed the English Channel with Virgin boss Sir Richard Branson at the wheel, in the process slashing four hours and 20 minutes off the previous amphibious record of six hours.

Since then, the innovative HSA powertrain, hull, suspension and water jet technology has been applied to a number of commercial and recreational prototypes and products. The 2013 Quadski was manufactured in a limited run of 1000 that sold quickly around the world.

“The idea of the Quadski was to show that it was feasible to produce and sell a high-speed amphibian and it certainly achieved that goal,” says Gibbs Amphibians’ testing and development manager, Matt Houston. He says Gibbs is currently engaged in discussions with a number of different companies about licensing the technology to manufacture the Terraquad. “Recreationally there is a huge market for it, and with the Quadski, we sold a lot onto superyachts and adventure yachts, because that is a pretty ideal application.

“Amphibious vehicles have been around for a long time, but they have either been fast on land and slow on water or vice-versa. We focus on being fast on both and that’s our point of difference.”

With proven technology and apparently imminent production, the Terraquad is getting close to providing private customers with their very own Bond moment.