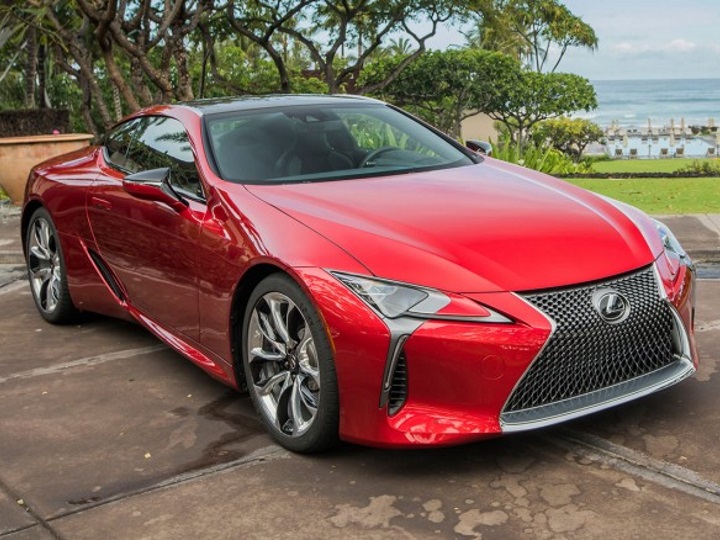 Four pivotal cars in the evolution of Lexus design

From stealthy to showy, these are the brand’s most siginicant cars in the last four decades.

The Lexus LC 500 will arrive soon, sporting a bold new look for the brand. Inspired by the LF-LC concept car shown in 2012, the grand tourer features sinister-looking headlights, a gaping front maw, and giant wheels and tyres.

This is a departure for the brand, which since its debut in 1989 has been known for its conservative designs. They have proved polarising. Drivers who don't want to draw attention love them, and those who want more flash loathe them.

Here is a look at four of the brand's most significant models — stealthy and showy ones — over the last three decades. The original LS 400, produced from 1989 to 1994, was Lexus's first production car. Internally known as F1 or Flagship 1, the full-size sedan required nearly five years and more than $US1 billion (about $A1.28 billion) to design.

Early sketches show the LS as a low-slung sports car, but that vision was abandoned for a more sober-looking sedan with a prominent front grille and a two-tone body.

Designers reportedly took two years to settle on the interior's leather-and-California-walnut trim. The LS did not share any Toyota platforms or parts, and it was one of the first luxury sedans to offer power adjustable seatbelts and an automatic tilt-and-telescoping steering wheel. The first-generation Lexus SC was a midsize coupe often credited with influencing the automotive designs of its time. Designers at Calty, Toyota's U.S.-based design studio, used a novel approach when developing the car: Instead of employing traditional 2-D sketches, they worked in moulded plaster, which allowed them to create more sculptural shapes.

Consequently, the final design had almost no straight edges and a relatively low drag coefficient. Lexus produced the SC coupe from 1991 to 2000, with only minimal styling updates during the run. In 2001, it launched the second-generation SC as a hardtop convertible, which was greeted with mixed reviews. Introduced in 2000, the rear-wheel-drive Lexus IS 300 was the brand's first compact car, designed to take on the BMW 3 Series and Mercedes-Benz C-Class.

The design of its taillights — round, surrounded by chrome, and covered with a clear lens — sparked a fad that was embraced and widely copied by the aftermarket crowd, and it influenced the development of clear-glass LED taillights.

The first-generation IS also debuted a pop-up navigation screen and unconventional chronograph-style gauges that can be found in some current Lexus models. The development of Lexus' first supercar took more than a decade. Various concept cars and prototypes preceded the production model, which debuted at the end of 2010. The Lexus LFA was built primarily of carbon fibre (earlier design studies used aluminium) and was designed to achieve optimal aerodynamics.

The company sold only 150 examples before announcing that it would not build a replacement for the model. But many styling elements — including the designs of the headlamps, taillights, and the five-spoke wheels — appear on current Lexus models. The TFT instrument cluster and the control stalks on either side of it can be found in the new LC 500 coupe.