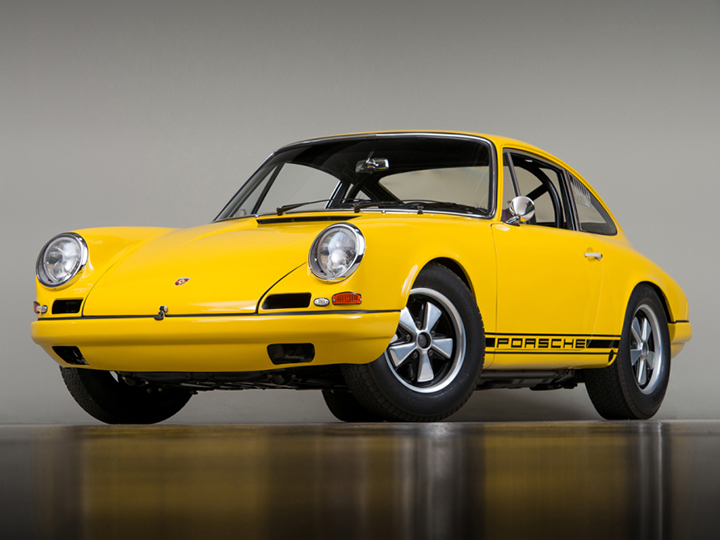 Four of the most significant Porsche 911s ever produced

Just as one never tires of seeing a masterwork in a museum, the same can be said for a 911 on the motorway.

When Porsche officially presented its flagship 911 model in 1964, the German automaker cemented its reputation for creating high-performance vehicles driven by a design language uniquely their own. And just as one never tires of seeing a masterwork in a museum, the same can be said for a 911 on the motorway.

The last several months have been momentous for Porsche and its iconic model as the marque manufactured its one millionth 911, premiered its top Turbo S, and has unveiled the most powerful and fleet street-legal 911 in its history. In addition, one rare prototype has been restored to pristine condition by an independent team. Here is a closer look at the aforementioned cars that have either premiered or reappeared this year. The 2018 GT2 RS — the latest in the iconic 911 line—has been bolstered by a 515 kW, 3.8-litre twin-turbo flat-six engine (generating 750 Nm) mated with a Porsche Doppelkupplung (PDK) GT 7-speed double-clutch transmission. The pairing allows the coupe to cover zero to 100 km/h in 2.7 seconds and to reach a top track speed of 340 km/h. The power train represents an increase of 59 kW and 50 Nm over the original 2011 version, as well as a rate of acceleration that is quicker by 0.7 seconds. The engine’s performance has been enhanced not only by its turbochargers, but with a secondary cooling system that sprays water on the intercoolers when the temperature exceeds ideal operational levels. Lending the car its cat-like reflexes without being skittish is a racing-inspired chassis that has had its chassis joints replaced by ball joints for added rigidity — a first for any road-specific Porsche to date. To ensure that the driver’s intent is most efficiently translated, the Porsche Stability Management System (PSM) monitors driving dynamics and activates the Porsche Ceramic Composite Brakes (PCCB) as needed. In addition, rear-axle steering directs the front and back wheels in opposite directions at low speed, and in the same orientation at high speed to simulate a shorter or longer wheelbase, respectively.

Excess weight has been eradicated by the use of carbon fibre reinforced plastic (CFRP) throughout much of the car, including the rear quarter panel air intakes, front fenders, and wheel housing vents, while magnesium makes up the roof. To further lighten the load, Porsche’s optional Weissach package shaves off roughly 18 more kilograms with the addition of magnesium wheels, carbon-fibre roof and anti-roll bars, and a host of other composite componentry.

Perhaps more visually impressive than the exterior, however, is what lies inside. The cockpit is dressed in black leather, red Alcantara accents, and carbon-fibre detailing. The latter includes the reinforced backrests of the full bucket seats. Swaddled in style, the pilot has easy access to the Porsche Communication Management system (for navigation and infotainment), and Porsche Connect Plus, the Porsche Track Precision App, and the optional Chrono Package when track time takes precedence. As with the 911 Turbo S Exclusive Series Coupe, announced June 7, the 911 GT2 RS has also been synched up with a Porsche Design watch. In this case it’s the 911 GT2 RS Chronograph — available only to the vehicle’s owners. The titanium-cased timepiece presents a carbon-fibre face that mirrors the instrument cluster of the car, and each can be further tailored to match the buyer’s specific automotive trim choices. On June 7, less than one month after Porsche produced its one millionth 911, the German marque announced another milestone with the 2018 Porsche 911 Turbo S Exclusive Series Coupe — the most powerful 911 Turbo S created. But the exclusivity goes deeper than what’s under the hood, as the hand-finished car presents new aesthetics inside and out, along with the option of a matching Porsche Design timepiece as complement.

At the heart of this Hercules is a 3.8-litre, twin-turbo flat-6 engine that generates 446 kW and 750 Nm. With 20 kW more than the standard Turbo S, the coupe is also 0.3 seconds quicker. The power train, which also includes a 7-speed PDK transmission, allows the car to crush zero to 100 km/h in 2.8 seconds and reach a track speed of up to 330 km/h. Along with its Porsche Dynamic Chassis Control and Porsche Active Suspension Management, the marque fine-tunes the two-door titan’s handling with the addition of Porsche Active Suspension Management and the Sport Chrono package — features that are usually available only as options. All of the above gets translated to the road through 50-centimetre centre-lock wheels, and is tamed by the Porsche Ceramic Composite Brake (PCCB) system which bolsters the vehicle’s already arresting performance.

The Exclusive Series Coupe’s definitive design elements include extensive use of composite materials, such as the carbon-fibre roof, side skirts, and trunk lid. Aerodynamics are accentuated with the integrated Aerokit that comprises a new front spoiler, a redesigned deck lid (with fixed spoiler and side winglets), and an automatic rear wing. To further distance itself from the more mainstream model, the car is presented in Porsche’s Golden Yellow Metallic paint contrasted with two carbon-fibre bands across the roof and rear. The pilot and passenger are pampered within the carbon-fibre–trimmed interior with 18-way adjustable leather seats, a Burmester sound system, and the Porsche Communication Management system. The latter includes navigation, entertainment, and connectivity features — many of which can be accessed from the steering wheel for convenience.

The Porsche 911 Turbo S Exclusive Series Coupe is produced by the new Porsche Exclusive Manufaktur atelier — specializing in bespoke builds — at the automaker’s facility in Stuttgart-Zuffenhausen. Only 500 examples will be made. In 1963, the same year that Porsche introduced its 911 to the world, McDonald’s served its millionth hamburger. It may have taken more time, but the German automaker hit the same number with its archetypal automobile on May 11, as the one-millionth Porsche 911 was produced at the factory in Zuffenhausen.

The car that captured the honour is a rear-wheel-drive Carrera S painted in the marque’s Irish Green. With a 3.0-litre, twin-turbo boxer engine under the hood, the 309 kW coupe covers zero to 100 km/h in 4.1 seconds while on its way to a top speed of 307 km/h. But it doesn’t just run with more kilowatts than the original 94 kW 911, the Carrera contains such high-tech touches as the Porsche Active Suspension Management (PASM) damping control and the Porsche Communication Management (PCM) infotainment system, which both refine the ride inside. From daily driver to concours-quality showpiece, the 911 remains one of the most popular sports cars on the market, as evidenced by the fact that 32,365 examples from the model line were delivered globally last year alone. One that will not be sold, however, is the Carrera that brought the count to a million, as it will be parked in the Porsche Museum after a world tour. Officially launched in the fall of 1964, the Porsche 911 was a way to take the popular, but still young, German marque into a new automotive market. With a more powerful 6-cylinder engine and a rakish look, the successor to the 356 model promised buyers a more sporting experience and double takes on the boulevard.

Legendary 911 racing victories were still the stuff of Porsche’s dreams when, in 1967, the company’s engineers pulled four 911 S cars off the factory line and set about creating a lightweight prototype dubbed the R, for rennsport. Call it the origin of the species, a machine that became the spiritual predecessor to countless 911-based cars that would claim victory at Le Mans, Sebring, and Daytona. Call it . . . for sale.

An example referred to as R4, the last of four R prototypes (20 production models would follow), is ready to drive into a new collection after being meticulously spruced up — but not over-restored — by Bruce Canepa and his team of experts at Canepa in Scotts Valley, Calif. While the price is available upon request, by way of guidance, Canepa notes that a few of the production 911 Rs have sold for almost $5 million ($A6.3 million) each. Extrapolate out from there.

“It’s the ultimate 911,” says ex-Porsche racer and marque expert Canepa. “The R cars were the first of the production race cars and, as such, really tell the story of everything that Porsche has done since then. It started here. And I’ve never seen a pre-galvanising car in this condition.” R4’s unusual history directly contributes to its rare, unmolested condition. After its first French owner missed a few car payments, the car was returned to the dealer in preparation for a 1970 auction. But then, R4 was stolen, only to be rediscovered in a warehouse in Marseilles in 1991. After a few decades in the care of a British owner, R4 found its way to a U.S. collector in 2006.

“Because it was stolen and hidden away, there was no moisture or oxidation to contend with,” says Canepa, whose team took the car down to its tub and refurbished every part. “There are no sins in this car anywhere. It tells its own original story.”

The 911 R, in general, remains a beast of a Porsche. Where a 911 S weighed in at a svelte 1043 kilometres, the R shed an additional 226 kilometres off of its figure thanks to fibreglass doors, decklids, and bumpers, as well as aluminum hinges and the use of thinner steel. The flat-6 engine is good for 165 kW at 8000 rpm. In fact, many consider the R a racing 906 in 911 clothing. Porsche racer Patrick Long sampled R4 recently for an exhaustive review in the new Porsche enthusiast quarterly, 000. Although he’s driven almost every Porsche race car imaginable, this 1967 gem left him grasping for adjectives. “This car is emotional, it’s loud, it likes it rough,” Long commented. “Now I get it.”

Canepa, who has made a name for himself improving Porsche’s 1980s supercar, the 959, says R4 offers the Porsche experience perhaps at its most pure.

“The balance of power to weight to handling is just incredible,” he says. “It reminds you that minimal weight is the best combination — it defines what a real sports car is. I honestly don’t know if there is a better car from this era.”