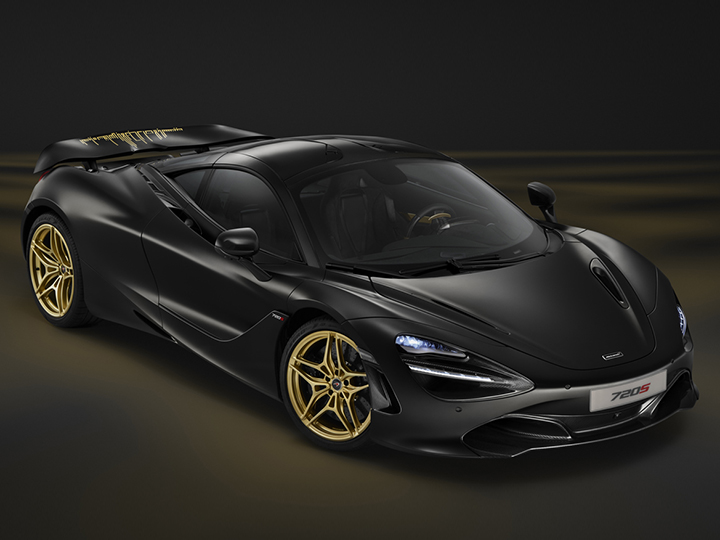 Whatever combinations of horsepower and sheet metal your mind conjures is likely not a stretch.

Think of the Middle East’s premier automotive event, and whatever combinations of horsepower and sheet metal your mind conjures is likely not a stretch. From the 24-karat gold-trimmed MSO bespoke McLaren 720S to the 5000 hp Devel Sixteen, the conveyances preening for thousands of enthusiasts at the 14th iteration of the Dubai International Motor Show didn’t disappoint.

Several automakers used the event to display their Sunday best for the mushrooming market that already boasts the region’s highest number of luxury cars per capita. Here are four of our favorites.

It’s no secret that McLaren Automotive is going gangbusters, working at a feverish clip to release 15 new models and derivatives by 2022. It’s also obvious that the marque has its eye on the Middle East, a small region responsible for an outsized share of the British brand’s sales. That’s why McLaren is opening new showrooms in Dubai and across the area, and why it chose the hometown show to debut a bespoke, black and 24-karat gold McLaren 720S (above).

Designed by McLaren Special Operations (MSO), the supercar features a rear wing bearing angular Arabic calligraphy that “evokes the skyline of Dubai,” according to Andreas Bareis, McLaren’s managing director for the Middle East and Africa. Fittingly, the script translates into progenitor Bruce McLaren’s favorite maxim: “Life is measured in achievement, not in years alone.” What passes for street legal in Dubai? Devel’s mid-level 3000-horsepower (2237kW), twin-turbo V16 concept. What is not street legal? The Dubai-based automaker’s star 5000 hp (3728kW), four-turbo V16 Devel Sixteen prototype, which attracted the bulk of attention on the showroom floor. The carmaker says the hypercar will be able to hit 300 mph (483km/h), putting it in contention for world’s fastest car. Meanwhile, the company also displayed the Devel Sixteen’s daily driver version: a twin-turbo V8 that delivers just 2000 hp (1491kW). The Italian automaker ICONA brought to the show the world’s first handmade titanium car, the Vulcano Titanium. Cut from the same cloth as the world’s fastest airplane, the Lockheed SR-71, the Vulcano Titanium rings up at $US2.9 million ($A3.8 million). The power train, developed by ex-Scuderia Ferrari director Claudio Lombardi, uses a 6.2-litre V8 that can achieve a top speed of 217 mph (350km/h) and erupt from zero to 100km/h in 2.8 seconds. Infinity’s 2018 QX80, the latest iteration of the marque’s largest SUV, struck a commanding pose, with a newly upright carriage and higher, more dramatic hood. That was no accident, according to Infinity’s senior vice president of global design Alfonso Albaisa. He explained that the team strived for a mix of power and presence when reimagining the Japanese brand’s flagship utility vehicle: “I think that at this scale, the lines give it a sense of illusiveness. It’s its own mountain. This kind of posture on the road gives it a sense of being a class above.”