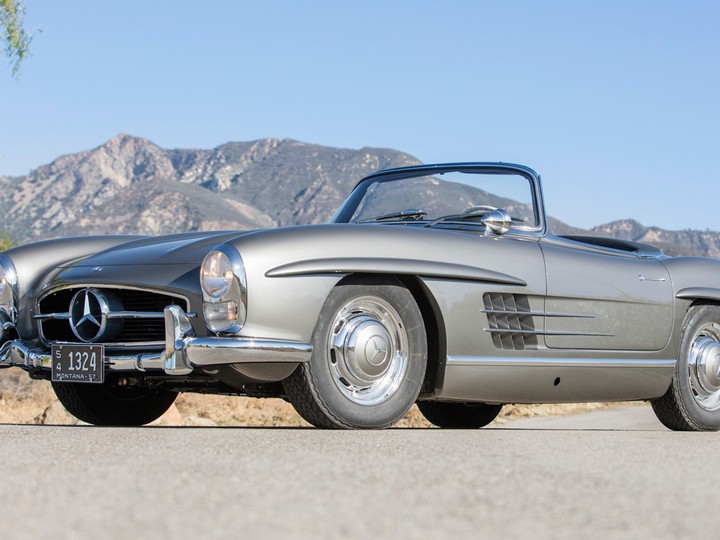 Next month, the collectible car world gathers in Scottsdale, Arizona, to celebrate scarce machines through a string of elite auctions.

Next month, the collectible car world gathers in Scottsdale, Arizona, to celebrate scarce machines through a string of elite auctions. Bonhams will present 105 lots in its Scottsdale sale, scheduled for January 18, at the Westin Kierland Resort & Spa. Fine Ferraris, a Mercedes-Benz 300SL Roadster, and more will be on offer. Here are five cars that could fetch seven figures. Only 37 of these Porsches exist, and this example, which participated in the 1958 Le Mans endurance race, is exceptional. “Less than half the cars finish,” says Jakob Greisen, vice president and head of U.S. motoring at Bonhams. “This car finished, and finished well. It was second in its class, and fifth overall.” The car has also been lucky — it got through Le Mans without crashing, which was quite a trick, given the fragility of the Porsche 550A Spyder. Greisen has driven the Porsche, and he says “it’s about as close as you can get to a go-kart on the street. It’s very light, and has a lot of power. It’s a very rewarding drive.” Perhaps the most miraculous aspect of this Ferrari 275 GTB/4 is the fact that it has less than 51,500 kilometres on its odometer. “It’s a 50-year-old car. If you divvy up 32,000 miles (51,500 kilometres) over 50 years, that’s less than 1,000 miles (1,600 kilometres) per year,” says Greisen, adding that 160,935 kilometres is a more typical number for a car of that vintage. It’s been adored since the day it left the factory, with two long-term owners in its background. Says Greisen, “The car was never neglected or left in bad hands.” This is the roadster version of the Mercedes-Benz 300SL, not the one with the iconic gull wing doors. It’s still a complete delight. This particular example stands out for being a prototype and for being the first to arrive in the United States. It is also fresh from a four-year restoration by Rare Drive, Inc., which is renowned for its work on Mercedes-Benz 300SLs. “The fact that it was the first into the United States is really quite significant, and so is the quality of the restoration,” says Greisen, noting that about half a million dollars ($A650,000) was lavished on the car. After Junior Conway of Junior’s House of Color worked his magic on this Ferrari, it won the Platinum Award from the Ferrari Club of America. The 365 GTS/4 is among the last great front-engined cars of the 1960s and 1970s. “It’s very powerful,” says Greisen, who has driven it. “It’s a 4.4 litre, which is nearly a litre more than the 275. You want to take it on the freeway and do 240 km/h in it.” The Speed Six was the faster, sportier version of the 6 1 /2 Litre model. While this particular example did not race at Le Mans, it’s the sort of vehicle that would have competed there in the 1920s. The body was made in the 1990s in the style of Vanden Plas. Suffice it to say that the 1930 Bentley offers a different driving experience than the mid-20th century cars. Greisen hasn’t driven this particular one, but he has driven others. “They’re quite entertaining. It’s like driving a big train, in a way. The six-and-a-half-litre engine is three times the size of most modern-day engines. It’s about 1.5 metres long and 1.2 metres tall. It’s like a ship engine.”