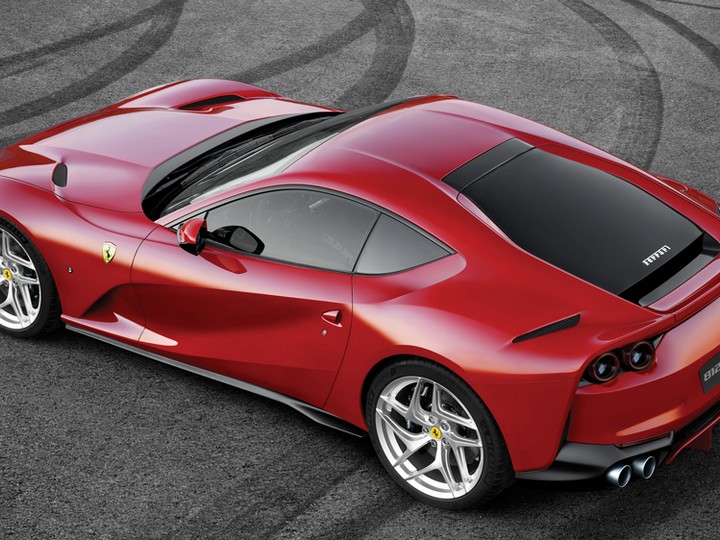 Ferrari has pushed to increase downforce while reducing drag. With the 812 Superfast, it makes a quantum leap forward.

In automobile design, says Ferrari design director Flavio Manzoni, the voids — the empty spaces — are as important as the volumes.

Manzoni, who studied architecture and industrial design at the University of Florence, attributes this credo to Oscar Niemeyer, the Brazilian modernist architect whose abstract forms and curves heralded, as the New York Times once wrote, his “war against the straight line, whose rigidity he saw as a kind of authoritarian constraint”.

Just as the voids form the curves in Niemeyer’s free-flowing building designs, they are essential to the voluptuous shape of the Ferrari 812 Superfast, Manzoni’s latest creation. More than just beautiful, the 812 Superfast is the most powerful and fastest Ferrari production car ever built. It’s equipped with an 596 kW V12 engine and can reach 340 km/h. But while Niemeyer believed that “form follows beauty,” the 812 Superfast’s form also follows function. Manzoni tasked his team with incorporating extreme aerodynamic measures into the design as well as heart-stopping beauty. The car’s many lips, loops, sweeps, scoops, and ducts serve both purposes. At June’s press preview in the courtyard of a baroque palace in Sassuolo, Italy (not far from Ferrari’s headquarters in Maranello), the car drew coos from onlookers.

“Considering the huge complexity, it was important to work to achieve synergy,” Manzoni said as he squatted by the front right wheel, running his hand over one of the sculpted spokes. “The integration of form and technology is extremely high.”

In recent years, Ferrari has pushed against barriers in the quest to increase downforce while reducing drag.

With the 812 Superfast, it makes the quantum leap. Never in relation to a passenger car have I heard so much about vortex generation, a method of using flaps and fins to create suction underneath the chassis. Nor have I ever heard of so many elements of “blown” bodywork: fender peaks and body contours with vents that stream in air before channelling it out at strategic spots. Matteo Biancalana — Ferrari’s head aerodynamicist, who started his career by working on racecars at Dallara Automobili — pointed out that Ferrari eschews additional spoilers. “They are not elegant,” he said. Nevertheless, because of active and passive elements and various fins and flaps, the 812 Superfast generates as much as 150 kilograms of downforce. All that downforce is needed to take advantage of the car’s power. The brassy 6.5-litre V12 produces its 596 kW at 8500 rpm and generates 717 Nm. About 75 per cent of the engine’s parts are new. Importantly, the fuel-injection system operates under higher pressure than that of the F12tdf, the model the 812 Superfast is replacing. Also, Ferrari adapted the continuously variable inlet ducts from its Formula 1 engine.

The 812 Superfast is the latest in a line of V12-powered grand-touring automobiles that Ferrari has been producing since 1950. After the 340 America evolved into the 410 Superamerica, the 410 Superfast Pinin Farina Speciale appeared at the 1956 Salon de l’Automobile in Paris. Although it now appears gothic — with its vented fenders, two-tone paint scheme, and huge fins — it was the progenitor of all subsequent Superfast models. Most sensationally in those early years, the 500 Superfast from 1964 lived up to its billing with a 280 km/h top speed.

The 812 Superfast’s cabin offers a flat-bottom steering wheel, two seats, no room for golf bags, no central video screen, and no apologies.

The new information and entertainment system — which is presented on five-inch screens on either side of the big tachometer — took some practice to operate, but the navigation works well and the graphics are brilliant. Ferrari’s chief development driver, Raffaele de Simone, said the brand racked up more than 800,000 kilometres of test-driving while developing the 812 Superfast, and this diligence showed in the flawless operation of the climate control and every other cabin system. The car was easy to drive across the agricultural and industrial landscapes of the Modena province and through the lovely villages in the foothills of the Apennine Mountains. The drive showed how well Ferrari has done with its first application of variable-rate, electrically assisted steering. And the ride quality over the region’s frost-tormented byways was compliant and never harsh.

An astonishing thing about the 812 Superfast is how it can dawdle through a town such as Fanano and then jump like lightning on the Pista di Fiorano, Ferrari’s test track outside of Maranello. The car attacked the turns with voracity. The rear-wheel steering (from the F12tdf), balanced chassis, magnetic shock absorbers, and sticky tires enabled me to turn some impressive laps. As de Simone said, the idea behind the car’s engineering is to enhance the driver’s competence. The 812 Superfast does this, and without being intrusive in any way.

Body roll and chassis misbehavior were never issues on the track, and the precise steering enabled me to put the car on the ideal line through every turn. The brakes — with large carbon-ceramic rotors and powerful 6-piston calipers — could probably have stopped time itself. At the speeds that I reached on the test track, which was too tight for me to go full throttle, the car’s stability was a given. But I had no doubt the 812 Superfast would have remained planted all the way to its 340 km/h top speed, thanks largely to its aerodynamic design, which Niemeyer likely would have applauded. “I am not attracted to straight angles or to the straight line — hard and inflexible — created by man,” Niemeyer once said. “I am attracted to free-flowing, sensual curves.”

In its obituary on Niemeyer, who died at age 104 in 2012, the New York Times wrote that “his work became a symbolic reminder that the … sensual and the rational are not necessarily in opposition.” Given the functionality of the car’s stunning form — and presuming there’s anything rational about an 596 kW automobile that reaches 340 km/h — the 812 Superfast offers a similar reminder.