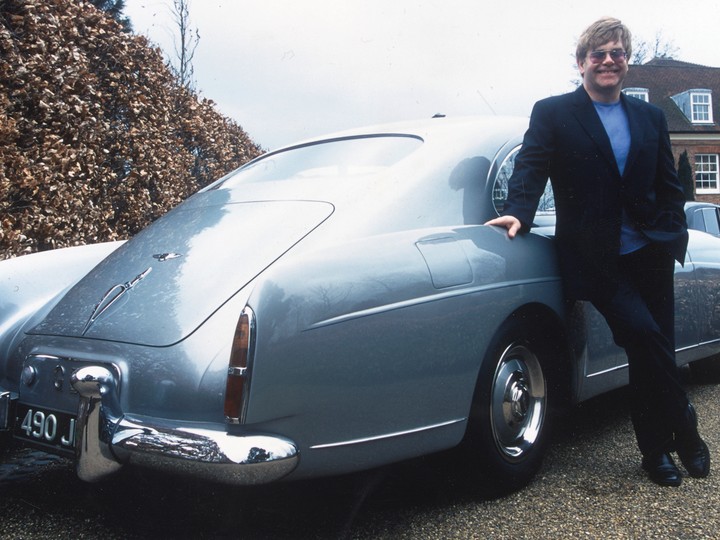 The lots include scarce Ferraris and automobiles once owned by former Beatles as well as Elton John.

Need to pick up a holiday gift for that hard-to-shop-for someone? You might want to browse the online catalogue for the Bond Street Sale from Bonhams, which takes place December 2 at the auction house’s New Bond Street location in London. The lots include scarce Ferraris and automobiles once owned by former Beatles as well as Elton John. Sorry, wrapping and red bows are not included. Vintage Aston Martin DB5s are always sought-after, but a Beatle provenance adds value. Tim Schofield, director of the Motor Car department at Bonhams in the United Kingdom, has handled Beatles-owned cars before and says, “In my experience, those did make a premium.” Though this DB5 features the classic Bond silver with a red interior, they aren’t the colours the car wore originally. McCartney ordered it in Sierra Blue with a black interior.

“If there were loads of photos in colour with Macca in his Aston with famous friends in and around it and on it, keeping it to the original specs might be important,” says Schofield. “Since there are not, [the owners] have gone to the Bond scheme.” The vehicle, restored to like-new condition, retains a fitting option that the ex-Beatle ordered — a record player. As special as the Paul McCartney Aston Martin DB5 is, this Mini Cooper ‘S’ Radford Conversion, which belonged to Ringo Starr, might be the more interesting of the two Beatles-owned cars in the sale. Starr insisted that the Mini be modified to haul his drum kit. Badges from coachbuilders Harold Radford and Hooper & Co appear in the car, which was converted to a hatchback to meet Starr’s needs.

“It’s bespoke, it was done for a reason, and it was done for the reason the person is famous. That’s why the guide [the estimate] is close to six figures,” says Schofield. Better still, it’s been owned by the same family for 40 years, and they’ve kept it well. “Its condition is lovely,” he says. “I can see the estimate being comfortably achieved and surpassed.” Elton John purchased this 1956 Bentley S1 Continental Sport Saloon in 1976, kept it for 25 years, and became a great fan of the car. Bonhams’s lot notes for the car quote him declaring it “the most beautiful car, I think, that’s ever been designed”.

Schofield says that the celebrity provenance adds 15 to 20 percent to the estimate, but Bentley S1 Continental Sport Saloons are coveted regardless. The two-door cold take up to five passengers and hit a top speed of 193 km/h. Destined for the spotlight at auction, Elton John’s former car is also covered in H J Mulliner coachwork, which will make it coveted all the more. Ferrari 288 GTO Coupés don’t come to auction all that often. Ferrari made only 278 of them, which means they’re rarer than the F40, the F50, and the Enzo. Schofield says he offered one in a U.S. auction earlier this year and included another in a Monaco auction in 2016. This vehicle — carrying coachwork from Pininfarina — was one of 20 Ferrari 288 GTO Coupés sold in the United Kingdom. It’s had five owners over its 32 years, and wears roughly 22,500 kilometres on its odometer. The car has also earned the all-important Ferrari Classiche certificate. The Enzo was the most expensive Ferrari ever when it was new, costing US$650,000 ($A855,000). More than a decade later, it’s held its value and then some, even though Ferrari ended up making 51 more examples than initially planned. This vehicle, which was delivered new to France, has all its books and tools, which definitely affects its estimate. “It’s a little like buying a Rolex watch,” Schofield says. “If it’s just the watch, it’s US$3000 ($3950). If it’s got its box and papers, it’s US$4000 ($A5260).” The car — dressed in bodywork by Pininfarina — has less than 8050 miles on its odometer, and it is Ferrari Classiche Certified.