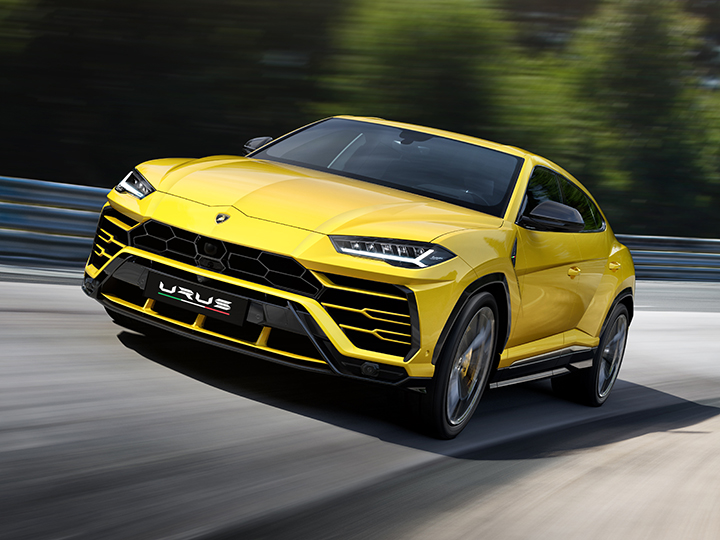 The new Lamborghini Urus is the most audacious model ever created by the Italian sports car maker, even more so than its first-ever SUV, the hulking LM002 (below) which provided some of the design inspiration for its modern successor. Lamborghini claims the Urus as “the fastest SUV available” and “the most powerful” after installing a front-mounted 4.0-litre twin-turbo V8, the company’s first-ever turbocharged engine. Making a storming 478kW of power and 850Nm of torque, it’s well equipped to shove the two-tonne, three-metre-long five-seater to performance never before seen in the class. “The Lamborghini Urus is a visionary approach based on the infusion of Lamborghini DNA into the most versatile vehicle, the SUV,” says Automobili Lamborghini chairman and chief executive officer Stefano Domenicali.

“The Urus elevates the SUV to a level not previously possible, the Super SUV. It is a true Lamborghini in terms of design, performance, driving dynamics and emotion as well as drivable every day in a range of environments.” Domenicali says the Urus was a perfect fit within the Lamborghini family. “It is the culmination of intensive development and passionate skill to create a new breed of bull: a Super SUV that transcends the boundaries of expectations and opens the door to new possibilities, for both our brand and our customers.”

Named after the Urus, or Aurochs – the large, wild ancestors of domestic cattle – the latest SUV model continues the brand’s affinity with bulls and Lamborghini even claims the new SUV resembles a Spanish fighting bull. The company has sought the widest possible spread of talent for its SUV, from moderate off-road ability and serene daily commuting to a hard-core track weapon, courtesy of that stonking V8 allied to an eight-speed transmission and standard carbon ceramic brakes at each corner.

The powerplant has been shoved as deep in the engine bay as possible to aid dynamic balance, Lamborghini says, while torque is shuttled from wheel to wheel as needed by a Torsen central self-locking differential. Clever torque vectoring further assists with power distribution as well as steering control, and the rear wheels can turn up to 3 degrees to effectively shorten the wheelbase by 600mm. In standard trim the Urus incorporates four driving modes via the ‘Tamburo’ selector – Strada (street), Sport, Corsa (track) and Neve (snow). Optionally, Terra (off-road) and Sabbia (sand) can be added. Exhaust sound, a hallmark of Lamborghini performance, is muted or enhanced depending on the mode chosen. Lamborghini says “every driver should feel like a pilot” and designed an interior that includes a low-slung driver’s seat surrounded by controls within easy reach and featuring the company’s famed hexagonal design cues. The standard sports seats are heated and electrically adjustable 12 ways.

Proving it is serious about utility, the rear seat accommodates three passengers, has a reclining seat back and even includes ISOFIX mounts for a baby capsule. Boot space is a usable 616 litres, opening to 1596 litres when the seat back is dropped. Materials within the cabin reflect a luxury car, from fine leather to Alcantara, aluminium, carbon-fibre and wood.

The Lamborghini Urus is already on sale in Australia from $390,000 (plus on-road charges) and in New Zealand from $323,000, and first customers are expected to take delivery in Autumn 2018, Lamborghini says.