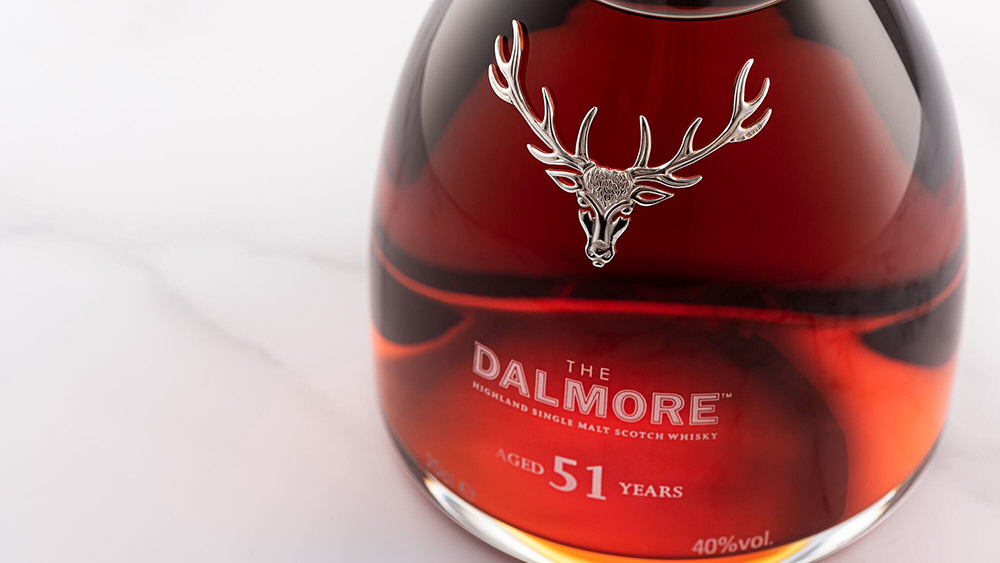 This is one for collectors: The Dalmore has just launched its first release of the new decade and it’s a mature and rare one at 51 years of age. The price? Around $105,000

Full disclosure—we haven’t tasted it yet, but the chances of this whisky being anything less than stellar are slim, as master distiller Richard Paterson is behind it. Originally distilled in 1966, the limited-edition single malt has aged in a mix of casks that once held bourbon, Port Colheita 1938 or sherry.

That decades-long ageing process allowed a host of complex flavours to develop: On the nose, the spirit is heady with hints of licorice, Morello cherries, balsamic vinegar and caramel. On the palate, you’ll taste plum, ginger and warm vanilla, according to the brand. Rich chocolate and tropical pineapple notes round out the finish. But we know that some collectors may themselves never sip it, instead choosing to preserve their investment for the future.

A closer look at this blend’s crystal decanter. Courtesy of The Dalmore

No ordinary debut, this release is meant to celebrate a new chapter in the company’s 180-year history. As with its other special and rare releases, the Dalmore commissioned custom crystal decanters with polished silver stoppers. Each bottle comes housed within a hand-crafted, sycamore case lined with quilted leather. With a whisky this old, a significant portion of the liquid had been lost to the angel’s share, so just 51 decanters of the 51 Year Old were made.

This release comes on the heels of another rarity, the Dalmore’s 60-Year-Old single malt, which was created by reuniting the liquid from twin ex-sherry barrels filled with whisky that was distilled on June 7, 1951.

Those two casks were the last of those laid down during the Mackenzie era. For three generations, the distillery was led by the Mackenzie Clan who first established many of the sources for the brand’s barrels. The Mackenzies were also the ones who adorned each bottle with the royal stag, which has become the distillery’s signature emblem. Only three bottles of the 60 Year Old were made, and they will go on a global tour this year to Shanghai, Los Angeles, Taipei and London.

Founded in 1867, the company still prides itself on the quality of its casks that are now hand-selected by  Paterson, who sources them from the world’s finest bodegas and wineries. Many of them were acquired through a long-standing relationship with sherry distiller González Byass forged over a century ago. It’s these vessels that create the label’s signature nutty undertones. Paterson has become a masterful cask curator during his 50 years as the company’s lead creative force. And his latest work might just be his best yet. But when asked what the greatest Dalmore he’s ever made is, Paterson says, “We haven’t made it yet.” We’re not sure what could beat this one—or that 60 Year Old—but we can’t wait to taste it.