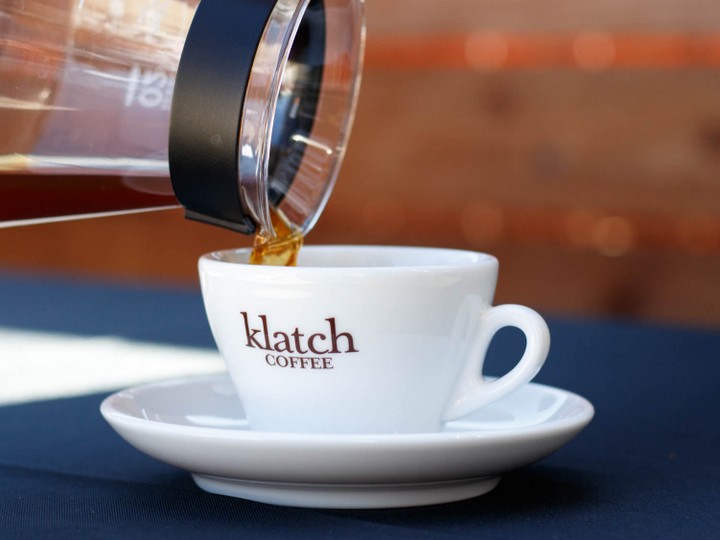 What does the ‘world’s most expensive cup of coffee’ taste like?

If you’re going to sell a $72 cup of coffee, it had better come with a pretty convincing story.

If you’re going to sell a UA$55 ($A72) cup of coffee, it had better come with a pretty convincing story. Los Angeles-based coffee roaster Klatch had one to tell as it brewed the “World’s Most Expensive Cup of Coffee” for us to try for ourselves.

The journey to this cup began earlier this year, at the Best of Panama competition where super-premium coffees are evaluated and auctioned. There, a bean grown at a single estate — Hacienda La Esmeralda — notched an extraordinarily high score from the judges. When the 45-kilo lot of beans went up for auction soon after, it snagged a world-record price of US$270 ($A350) per kilogram.

The coffee is a Geisha varietal of bean, which was originally discovered in Ethiopia, but has been found to grow especially well in Panama. Its fruity, nuanced flavor profile has made the bean a favourite of baristas entering competitions. And Esmeralda’s home soil is “the perfect place to grow Geisha,” says Todd Goldsworthy, Klatch’s Coffee Guru (yes, that’s his actual title, printed on his business card).

The soil, the climate, the altitude, and the growing practices at Hacienda all combine for ideal conditions to cultivate great Geisha. “There are really warm days, and very cool nights. So the coffee cherries grow nicely during the day but slow down growth at night, making them denser and sweeter.”

Klatch wants you to think of this cup of joe not in coffee terms, but more as you would wine. “Farmers used to just take all their beans and blended them together; it didn’t matter what it was,” in a manner similar to winemakers just combining yield from a collection of vineyards, Goldsworthy says. “Daniel Peterson at Esmeralda was a pioneer at separating out coffees.” This bean, Klatch says, is akin to a grand cru.

“When I was in college, I drank two-buck-Chuck and eventually I started drinking better wine. My everyday bottles cost me US$20 ($A25) and they’re great,” Goldsworthy says. “But sometimes those are those really really special wines, where the terroir is just right for a grape, and I want them sourced from a single vineyard. For that I’m willing to pay much more, and that’s what we’re going for with this coffee. That really high-end experience.”

In the past, Goldsworthy has used beans from Esmeralda to win the United States Brewers Cup twice and Klatch’s roastmaster, Mike Perry, has had a longstanding relationship with Esmeralda. So when it came time for an American company to receive an allocation of Esmeralda Geisha 601, Klatch was the only one to secure one of the 5 kg batches. They’ve decided to create an event to serve that coffee to the public.

On a sweltering October day in Los Angeles, Goldsworthy readied a cup of Esmeralda Geisha 601 for me. First, he carefully measures out 15 grams of beans — no more or less — on a digital scale before grinding. Next, he prepares his water. “I blend my own water so I have the right amount of calcium and magnesium to really bring out the nuances of this coffee.” He heats that to 96 degress celsius before slowly pouring it over the beans for extraction.

Goldsworthy gets excited as he’s allowed to delve into the minutiae of how he makes the coffee and its tasting notes. “We get a lot of strawberry in the aroma, like you’re walking through fresh strawberry fields,” he tells me.

He hands me a cup and observes intently as I stick my nose into it and take a sip. After it’s first poured and still at its hottest, the coffee has a gentle, balanced acidity, that rounds out on the palate with a subtle sweetness. He points out notes of pineapple, but I get that less in the flavour than how it behaves on the palate, balancing the sweet and acidic. As it cools, that acidity intensifies slightly, taking on a more citrusy character. The beans are roasted lightly, so as to not cover up these nuances. “You don’t want to taste the roast,” Goldsworthy says. “You want to taste the bean.”

Ultimately, this cup of coffee will be lost on most everyone who drinks it, except for the people Goldsworthy affectionately refers to as “coffee snobs.” The type of people who brew coffee for a living or judge coffee competitions. I’m sure they’ll love it. For those of us philistines who merely like coffee, you’ll think it’s a good cup, but it won’t be so transcendent to you as to justify the expense. This is for people chasing a truly rare coffee experience and unique flavor profile.

If you consider yourself among those coffee-aficionados, you can try a cup prepared by Goldsworthy outside of LA on Saturday, November 18, or be one of 80 people able to order 15 grams to be sent to you for US$55 ($A72).