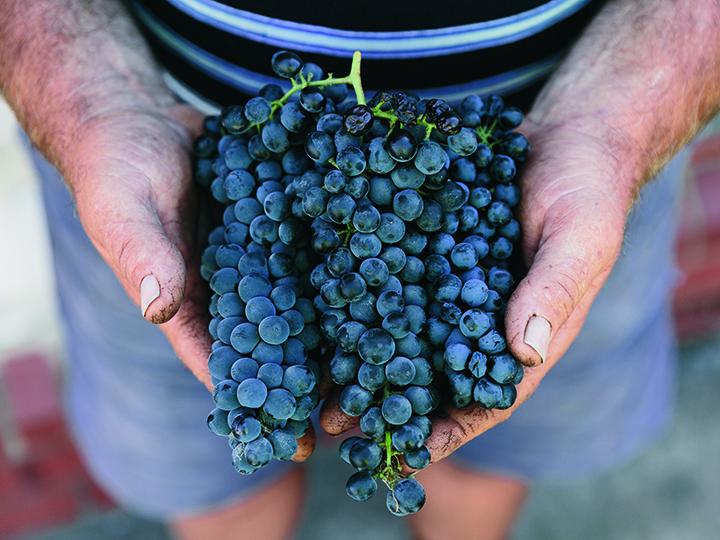 Shouldering the weight of grape expectations

The Barossa was a trailblazer for Australian wines, and the stories run as deep as the vines.

Work in wine for long enough and you’ll develop a way of thinking about the Barossa Valley.

Located about 70 kilometres northeast of Adelaide’s CBD, the Barossa is an old and history-heavy region, with big wines and big personalities that hang from a family tree of winemakers and growers whose roots go back more than 180 years. Its people are tough, loyal and honest.

- Want to join the stars of the present and the stars of the future for dinner as part of our exclusive Culinary Masters series during October? Seats are strictly limited for seatings in Melbourne, Hobart, Adelaide, Brisbane and Sydney. Click here to book and for more information.

It’s said you need to have ‘three in the ground’ here – meaning you’d better have buried up to three generations of your family in the region if you’re going to be anointed as a ‘Barossan’.

For a region so steeped in history, the Barossa finds itself at a fascinating intersection in the new narrative for Australian wine. With a new generation of sommeliers and wine buyers stalking the zeitgeist and the next ‘small thing’, more of the contemporary wine market is steering a course for diversity in style and variety, something for which the Barossa is not traditionally known. It’s easy to forget that for the past 30 years, the Barossa has done the majority of the heavy lifting for ‘Brand Australia’ wine. As a sommelier I worked in London for Sir Terence Conran and I can still remember the look of recognition and confidence in the faces of my guests when I mentioned the name Barossa. As the global wine ambassador for Jacob’s Creek, I represented the wines and people of the Barossa around the world and I saw that same trust and confidence wherever we talked and tasted the wines of the Barossa. Perhaps more than any other, these are the wines that kicked down the doors and opened an international marketplace for Australian wine. Arriving in the township of Tanunda for the Barossa Vintage Festival this year brought a reminder of the greatness of this most Australian of wine regions – and an awareness of the quiet revolution now taking place there.

Tom Shobbrook is one of those old souls. He’s tactile, all handshakes and hugs; as he talks he lasers you straight in the eyes. He’s not your average winemaker, nor are his wines much like the usual drinking experience. Although, as he puts it, his wines are beverages first: “I want to drink a bottle of wine and walk away from the table,” he quipped at a tasting in his winery and homestead, nestled in Seppeltsfield.

Shobbrook’s wines are best described as ‘natural’. They don’t rely on oak, alcohol and fruit sweetness, but rather the friction between taste and texture. Acid and tannin rub up against each other in his reds and whites and, with that, carry wonderful flavour, complexity and weight – while also staying light on their feet and refreshing. He plays with varietal blends that have nothing in common with the usual suspects from many of his neighbours. His wines have been organic since 2009, the Barossa’s warm and dry climate minimising the risks associated with humidity. Craig Isbel and Brian Conway were drinking in the Beaujolais region in France when they had a great idea. For many, that would simply have fizzled when the booze wore off and reality returned. But not for these guys, who came home and created Izway Wines, an exercise in displaying the nuances behind established subject matter like shiraz and grenache.

They use site and sub-region to tease out the secrets that lie buried in some of the world’s oldest soil. Power and elegance and a respect for old vines and regional character come to mind when tasting these wines, with a nod to Craig’s experience at nearby Torbreck Wines, where he still serves as senior winemaker. A tip from my tasting with Craig at his cellar door: the late-ripening 2017 vintage will yield outstanding grenache. Buy up big when these releases begin next year.

A handshake from Peter Lehmann (1930-2013) was as good as a contract. Lehmann’s legacy seemingly stretches through countless Barossa families, while the wines that still bear his name remain firmly entrenched among the greats of Barossa winemaking. “Take care of your vineyard, take care of your people and great wine will come.”

Many of us know the story. In 1977 Dalgety, a large pastoral business and the owner of Saltram Winery, decided not to buy grapes for the 1978 vintage. Peter Lehmann, then a winemaker at Saltram, refused to renege on the growers’ contracts. In a risky move, Lehmann and a handful of supporters established Masterson Wines to buy the grapes and make wines under contract at Saltram in vintages 1978 and 1979. In short order, the fledgling enterprise was forced to build its own winery, and has never looked back since.

The consistency and quality of Lehmann’s wines continues to this day. For me, it’s most notable in their underrated white wines such as the ‘Margaret’ Semillon (named after Lehmann’s wife and strongest supporter) and ‘Wigan’ Riesling, both of which are released with up to five years’ bottle age. In a region so often dominated by red wine, these two whites were some of my highlights from this trip.

As an older generation moves on and a newer one comes in, there’s often a perceived need to replace the current way of thinking with a new one. It doesn’t feel like that here. Perhaps no other region so passionately curates its history as the Barossa. It’s evident in initiatives like the Barossa Grounds Project, recording the soils, climate and topography of the region and its catalogue of old-vine grenache and shiraz.
In addition, ground will soon be broken for construction of the Barossa Cellar in Vine Vale, which will serve as a central cellar for the Barossa winemaking community. Wineries from the Eden Valley and Barossa Valley will store collections of their most precious wines there.

The Barossa Cellar will be invaluable as a time capsule of the greatest wines of their era, which future generations will one day be able to enjoy as much as we do now.