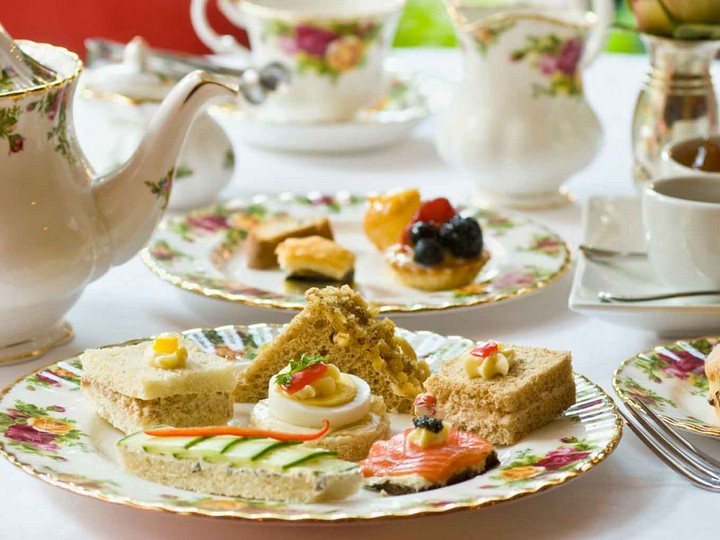 Seven of the most extravagant afternoon teas in the world

From Northern Ireland to Sri Lanka, experience the world through the world’s most decadent afternoon teas.

The origins of afternoon tea are truly decadent. It was 1840 and the Duchess of Bedford, Anna Maria Russell, faced a quandary: Every afternoon, sometime between lunch and dinner, she found herself famished. The agonising wait for her next meal was too much, and so the royal Brit initiated the practice of taking sweet cakes and savoury sandwiches with her daily pot of tea. Today, luxury hotels offer afternoon tea in a manner Russell would have most certainly approved of, serving elaborate treats – from caviar and Champagne to macarons and eclairs – that no doubt make the tea itself seem like an afterthought. Here, we uncover seven luxurious tea services around the world that make for a most extravagant late-afternoon indulgence. The Baccarat Hotel New York’s tea sommelier Gabrielle Jammal spent a full year conceiving this four-course masterpiece. Named for the last Tsar of Russia, who famously ordered so much Baccarat crystal that the company created a separate furnace to fulfil his requests, the Tsar Nicholas II menu starts with an amuse bouche of pickled sable, kohirabi, and baby beets. Next, 30 grams of Petrossian Tsar Imperial Ossetra caviar come with black tea–infused blinis and a half-bottle of Krug Grand Cuvée. Following an intermezzo of Stoli Kvass sorbet infused with rooibos, a pot of green Lung Ching Imperial tea by the French purveyor Mariage Frères arrives alongside lavender shortbreads and Earl Grey imperial caramel. Taking tea in the Merchant Hotel’s ornate Great Room Restaurant – a magnificent Victorian spectacle with a glass cupola and the Irish isle’s largest chandelier – is an experience in and of itself. For a traditional spread as grand as its setting, order the Krug Grand Cuvée afternoon tea, featuring Royal Beluga Caviar harvested from Huso Huso sturgeon and a bottle of the revered champagne. Alongside a tea of your choice, treats include goat cheese tarts, coffee and praline eclairs, and caramel and chocolate gateau. Tea in the Garden Court at the Palace Hotel nothing new. Tea and scones with Devonshire cream and lemon curd have been a tradition here since the early 1900s. Served Saturdays from 2 pm to 5:00 pm, the hotel’s Signature Tea Service serves blends from the artisanal brand Tealeaves alongside savoury flavours from the East (curry chicken banh mi sandwiches) and West (roulade of salmon with dill crème fraîche and trout caviar). Upgrade to the Caviar Tea for Two to add Black Pearl White Sturgeon Caviar and Veuve Clicquot to the already extravagant service. A tea service after the Duchess of Bedford’s own heart, Chewton Glen’s Taittinger Nocturne Champagne service is unmistakably British, served in the country-house hotel’s main restaurant with a plate of pretty sandwiches and cakes. Most patrons dine overlooking the gardens at an upright table, similar to the manner in which the working classes of the past devoured their high tea. Channelling the duchess’s afternoon tea tradition – she preferred to lie in recline while feasting – one could conceivably hoist his or her feet up onto the Dining Room’s bright green settee. After half a bottle of Taittinger Nocturne Champagne and a three-tiered tower of delicacies, Chewton Glen’s visitors might even be tempted to request a room for the night. Much more than a fourth meal, Resplendent Ceylon’s Tea Celebration travel package spans seven nights (four nights Ceylon Tea Trails and three nights at Cape Weligama) and features an itinerary that commemorates 150 years of tea-growing in Sri Lanka. Guests first travel to the tea trails of south central Sri Lanka, where they dine with a local tea historian and take a night safari through the estate. Next it’s on to the southern coast at Cape Weligama where the new Sanctuary Spa pampers travellers with tea-based treatments. Finally, in Colombo, Dilmah Tea founder Merrill J. Fernando hosts a private tea tasting for his guests, followed by a tea mixology masterclass. On the 102nd floor of the highest hotel in the world, the Ritz-Carlton Hong Kong‘s Tosca restaurant presents a special Damiani Afternoon Tea to pair with a sparkling collection from the Italian jeweller Damiani. In between sips of Earl Grey or chamomile tea, guests feast on edible “ruby rings” of foie gras terrine glazed in cherry syrup and traditional Italian cakes laced with tannic Earl Grey chocolate cream. Tosca waitstaff use platters and plates fashioned like leather jewellery trays to serve the treats. Throughout the service, a Damiani representative is on hand to show the jewellery pieces that inspired the menu. Available Saturdays from April 1 through May 13. For 10 years, the Berkeley’s head pastry chef Mourad Khiat has been inspired by designers to create his fashion-themed afternoon tea for every biannual London Fashion Week. For this year’s anniversary-themed Prêt-à-Portea service, the chef is remaking his top 10 creations of the past, from his Manolo Blahnik stiletto biscuits to his Jason Wu cherry mouse with a pink skirt and biscuit heel. Khiat will also teach a weekly masterclass from his new recipe book Prêt-à-Portea, High-Fashion Bakes & Biscuits. During the two-hour session at the hotel’s bakery, students will learn to make many of his signature desserts, including his iconic Moschino blood-orange Victoria sponge handbag encased in red chocolate.