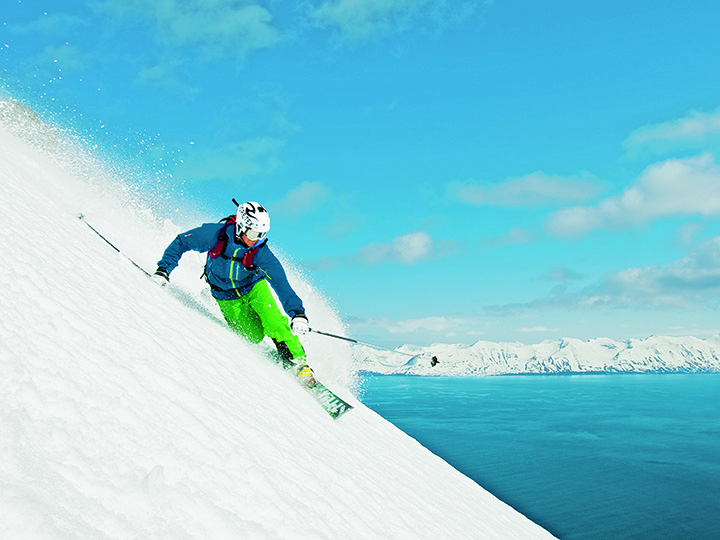 Nine of the most extreme skiing trips on the planet

These nine trips for the Southern and Northern winters promise enough powdery thrills and pampering frills to suit every type of skier.

Robb Report Australia skips the chairlift lines and goes off-piste to uncover the world’s best experiences on two skis. From a high-flying adventure in Iceland’s Troll Peninsula to new five-star stays in the ever-fashionable French Alps, these nine trips for the Southern and Northern winters promise enough powdery thrills and pampering frills to suit every type of skier.

Powder skiing in the land of fire and ice Jökull Bergmann could be considered the grandfather of Icelandic heli-skiing. The founder of local outfitter Arctic Heli Skiing has been bringing hard-core snow chasers to the country’s northerly Troll Peninsula for nearly a decade. Only recently, however, has he found a top-tier lodge to host his guests after the last run of the day is done. Bergmann has partnered with the adventure company EpicQuest to open Karlsá, a former sea captain’s house turned private heli-ski estate set among some of the peninsula’s best skiing terrain. New from the 2017 season, EpicQuest’s four-day Ultimate Heli-Skiing Program (epicquest.com; priced from about US$10,500 per person) for as many as eight guests includes exclusive use of Karlsá, a chef, a driver, internationally certified heli-ski guides and unlimited use of a piloted Eurocopter Astar B3. EpicQuest also operates four- and six-day programs from a semi-private lodge on Bergmann’s family farm. – JENNIFER ASHTON RYAN

An upscale home base in the newly connected Austrian Alps Austria’s St. Anton am Arlberg (stantonamarlberg.com) is Europe’s mecca of Alpine skiing, with more than 300 kilometres of groomed trails and roughly 200 kilometres of advanced off-piste terrain. It’s also home to charming Tyrolean villages and some of the most snow-sure conditions in all of the Alps. This Northern winter the Arlberg’s skiing got even better with the completion of three new gondola systems that connected all eight of the region’s resorts for the first time. The upgrade makes the Arlberg Austria’s largest interconnected ski area. For a luxurious home base close to the action, book the new ski-in ski-out Chalet Tschöder (through Bramble Ski, brambleski.com), which sleeps as many as 14 in seven bedrooms and blends traditional Alpine architecture with contemporary Austrian design. The chalet (priced at about $80,000 a week) is located just minutes from the Nasserein ski lifts on the edge of the St. Anton resort’s main peaks. Après-ski is equally impressive at Tschöder, which features a gym, a hot tub and sauna, a private spa, a cinema and a full staff. – WILL HIDE

If the ski fits Pete Wagner is one of the most connected people in Telluride. The founder of Wagner Custom Skis (wagnerskis.com), a bespoke ski and snowboard manufacturer, has based his innovative company in the Colorado town for more than a decade. Now he is sharing his network of local friends and experts to offer a new Wagner VIP Program to his devoted customers. Wagner’s team works with Telluride Rentals, a home-rental agency and concierge, to curate itineraries that can entail everything from Telluride Mountain lift tickets to a back country heli-skiing adventure among 4000-metre peaks. The program offers exclusive off-slope experiences as well, providing first-class or private air travel, ski-in ski-out accommodations, and perks such as après-ski massages, reservations at top Telluride restaurants and day trips via snowmobile or helicopter to the nearby Dunton Hot Springs resort. Of course, every itinerary comes with a pair of made-to-order skis created at Wagner’s new 465-square-metre Telluride factory and customised based on each skier’s build, skill level, riding style and terrain preferences. “No two pairs of our skis are exactly alike,” Wagner says. “It’s the same with the VIP Program. Everything is à la carte.” – BAILEY S. BARNARD If you have a thing for ski movies, you know Bella Coola Heli Sports (bellacoolaheliskiing.com). The British Columbia outfitter’s exclusive Coast Mountain terrain has been featured in films like Seven Years in Tibet and K2 and is a perennial star in skiing’s history: the fat ski was perfected on its precipitous peaks, and descents made on its slopes have set many a benchmark for big-mountain free skiing. Striving for greater heights is the outfitter’s newest home base, Foster’s Heli Ranch, a small-group property set among the Pantheon Range and some of the tallest peaks in the province. The rustic-luxe lodge, which is available on an exclusive-use basis (seven-night packages start at $68,500), accommodates just five skiers at a time. The lucky few guests enjoy a rare opportunity to ski unexplored terrain. With a private pilot and potential first descents on every horizon, naming runs becomes part of the plot, meaning you’ll not only experience ski history – you’ll help write it. – LESLIE ANTHONY Niseko should have had its moment long ago. Set on Japan’s northernmost isle of Hokkaido, the ski resort was dubbed “the St. Moritz of the Orient” in the ’60s for its long season, champagne powder and picturesque mountains. Yet somehow, Niseko United (niseko.ne.jp) – which comprises four villages and 885 hectares of terrain – remained largely under the radar, luring mainly in-the-know Australian snowboarders and Asian skiers. Now its time has finally come, thanks to a new bullet train linking Hokkaido to Tokyo in just four hours. While the fast-paced connection is sure to spawn an influx of international snow seekers, infrastructure improvements like new high-speed gondolas will keep lift lines wait-free. The ski-in ski-out Kasara Niseko Village Townhouse (kasara.com) is also catering to the crowds by adding 32 luxury accommodations adorned with tatami-mat dining rooms, ofuro soaking tubs and sliding shoji screens. Sure to draw skiers in future seasons is a new Ritz-Carlton Reserve property, which is scheduled to open in 2020. – ADAM H. GRAHAM

There’s no rush to beat the crowds at Eagle Point, a Southern Utah mountain resort whose As You Wish program (eaglepointresort.com) allows private groups unrestricted and exclusive access to its more than 240 skiable hectares. The total resort takeover (priced from $13,000 a day; available Tuesdays through Thursdays only) also includes exclusive use of Eagle Point’s accommodations, dining venues and amenities. Buyouts can range from a quiet getaway for a few families to a corporate retreat for as many as 300 skiers. – LARRY OLMSTED With its heated footpaths and slope-side cookies, Beaver Creek (beavercreek.com) is one of the United States’ most indulgent ski resorts. But chocolate-chip cookie in hand or not, long lift lines can shatter the illusion of luxury. Ensuring the royal treatment is the Colorado resort’s new White Glove Winter Vacation package. The four-night experience (priced from $65,000 for four skiers) begins with a first-class flight into Eagle Vail airport, followed by a scenic helicopter ride to the resort. Guests stay at Beaver Creek’s only ski-in ski-out mountaintop home, Trappers Cabin, which features a billiard room, a hot tub and butler service. Four Epic Passes are also included, as well as two full days of private ski instruction, Helly Hansen ski attire and high-performance equipment rentals. Better than any cookie, of course, is the package’s White Glove First Tracks pass, which promises early lift access and plenty of first runs. – L.O.

This year, the elite retreat of Courchevel marked 70 years of downhill distinction. To honour the occasion, the world’s largest ski resort, Les 3 Vallées (les3vallees.com) – which comprises eight linked resorts (including Courchevel), as well as 600 kilometres of runs and 25 summits – was freshened up. The celebrations began with the opening of the new Hôtel Barrière Les Neiges (hotelsbarriere.com), a 42-room retreat with white-marble bathrooms and a 1000-square-metre spa offering bespoke Biologique Recherche treatments. Aman’s ski-in ski-out Le Mélézin (aman.com), located on Courchevel’s Bellecôte piste, also unveiled a new look following an extensive renovation that added a bar and cigar lounge and upgraded the 31 rooms and suites. On the dining front, chefs Maxime and René Meilleur of Saint-Martin-de-Belleville’s legendary La Bouitte recently received their third Michelin star, while l’Épicurien and Méribel favourite l’Ekrin each earned their first. On the slopes, Les 3 Vallées’ visitors can these days avail themselves of the region’s new 3D app, which features high-resolution trail maps, real-time snow-depth information and live webcam feeds. – A.H.G. White Desert has been bringing intrepid travellers to the world’s loneliest landmass for a decade. The London-based outfitter offers the only luxury accommodations – fibreglass igloos adorned with plush faux furs and custom furnishings – in all of Antarctica. This season, the company celebrates its 10th among the Great White Desert’s sprawling glaciers and snowy expanses with a renovated camp that includes a new lounge with a library and bar, a new dining room and six state-of-the-art sleeping pods with en suite bathrooms and bespoke furniture. Guests can take advantage of summer’s 24 hours of sunlight with long days of kite skiing – hitting speeds of up to 35km/h and covering hundreds of kilometres of snow-covered flatlands – as well as ice climbing and abseiling. White Desert’s Emperors and South Pole experience this November (white-desert.com; priced from about $90,000 a person) also includes a visit to the continent’s colony of 6000 emperor penguins and a flight to the South Pole. For the ultimate polar adventure keepsake, travellers can also purchase White Desert’s limited-edition Bremont watch (priced from about $9300), featuring a map of Antarctica, a 90-degree dial, a South Pole destination timer and an inscription bearing the date of their expedition. – JACKIE CARADONIO