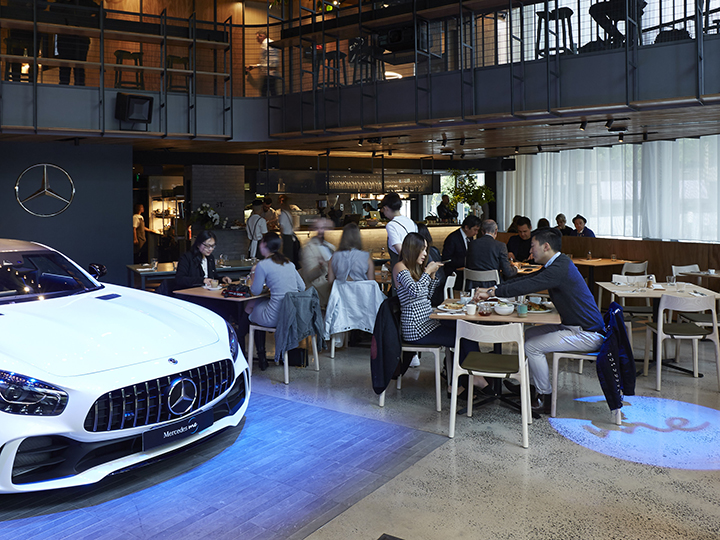 Melbourne’s newest cafe puts the ‘me’ in Mercedes-Benz

The architecturally designed space sits at the base of the landmark Rialto Towers and is the first of its kind in Australia.

Melbourne’s cosmopolitan café culture is world-renowned and with the opening this week of Mercedes-Benz’s Mercedes Me venue in the heart of the CBD, there’s another reason for the rest of the world to look on with envy.

The architecturally designed space sits at the base of the landmark Rialto Towers and adjacent to one of Melbourne’s most bustling intersections, the corner of Collins and King streets. The first of its kind in Australia and only the seventh such Mercedes-themed venue in the world, the car company envisages it as much more than a mere café – although with one of Melbourne’s most accomplished coffee roasters, St Ali, providing both the java juice and an innovative breakfast/lunch menu, it comfortably ticks that box.

The two-level layout not only provides expansive views of bustling Collins Street outside, but is divided into themed zones, each with a different feel. None are an in-your-face dealership-style experience – Mercedes-Benz points out that there is no selling and very little branding, save for one big logo – unless you go looking for it.

Simon Johnson, the general manager of the Mercedes Me Melbourne store, told Mercedes-Benz Magazine this month that “we want to be a place that people love, and look forward to coming back to”.

“Whether that is just coming in and enjoying that atmosphere, or the great hospitality, or finding out more about the Mercedes-Benz brand,” he says.

“The Mercedes Me stores around the world are about celebrating each city’s particular culture. Of course, in Melbourne we knew that had to be the city’s famed café culture, and the streetscape itself.

“As well as being a place for fans and customers to enjoy, Mercedes Me Melbourne opens up the Mercedes-Benz brand to people who may not have previously considered it. It’s not a merchandise store nor a retail outlet, but an access point to the brand, in what is an entirely new approach in Australia.” To that end, fans of the brand keen to explore will find interesting touchpoints around the venue with quirky and engaging facts, from the menu that hints at the company’s rich automotive heritage to a visit to the ‘garage’, where some of Mercedes’ most famous cars are featured.

Lest you forget where you are, a single notable Mercedes-Benz model – from the latest GT sports car to a classic 300 SL Gullwing – will take centre stage in front of a bank of monitors showing car-themed content.

However, there are also plenty of car-free spaces to loiter over coffee or a feed – from the ‘air, land and sea’ booths on one side that celebrate the three points of the company’s famous logo, to the Library area upstairs, a small, separate boardroom, and the ‘Meet the Maker’ section where regular displays of bespoke handcraft are to be hosted. The dual-level design features an eye-catching iron framework that not only provides a focal point, but also serves as a means to partition away sections of the venue for meetings or events, or open it fully for larger parties. It was designed as a collaboration between Mercedes-Benz and St Ali with architects Jackson Clements Burrows (JCB).

“We were trying to develop a language which we felt would be reflective of the home for Mercedes-Benz,” JCB’s Simon Topliss told Mercedes-Benz Magazine. “We found these wonderful images of some of the Mercedes-Benz factories of the ’50s, and these beautiful factory spaces with amazing, fine steelwork. It was spare and minimal … and incredibly ordered.