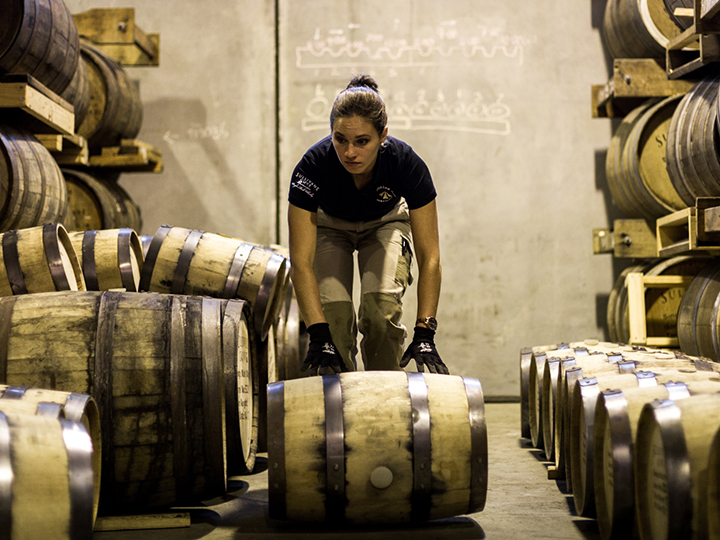 Boutique boom fuels our fascination with spirits of Australia

The boutique spirits scene has exploded in Australia, providing drinkers with an embarrassment of riches when it comes to local tipples.

Whisky from Tasmania. Rum from Western Australia. Gin from pretty much everywhere. In any bar you walk into these days, you’re assured of being confronted with a tough choice from a mouth-watering array of Australian-made boutique spirits. Even local pubs are getting in on the act.

It wasn’t always thus. At the turn of the 21st century, a mere handful of Australian distillers – some more enthusiast than craftsman – struggled to find markets for even low volumes of production.

- Want to join the stars of the present and the stars of the future for dinner as part of our exclusive Culinary Masters series during October? Seats are strictly limited for seatings in Melbourne, Hobart, Adelaide, Brisbane and Sydney. Click here to book and for more information.

Temperate weather, fruitful soil, clean water and an intelligent and innovative population that seriously loves a drink weren’t enough by themselves to kick-start a viable boutique spirits industry.

So as you savour your favourite Aussie spirit in 2017, raise your glass in honour of our city planners.

It was their relaxation of planning rules in major cities in the early-to-mid 2000s that paved the way for hundreds of new bars to open, asserts Stuart Gregor, the president of the Australian Distillers Association.

“We’ve seen a bunch of great cocktail bars open and take an interest in producing unique drinks. Of course, they’ve quickly realised there’s not many local options,” he says. Demand also came from the other side of the bar, where increasingly discerning urban types rejected low-grade imported spirits. “Australians like the idea of drinking Australian-made beer and wine, so they’re like, ‘Why do I have to drink spirits that come from somewhere else?’,” says Gregor, who is also a part-owner of Melbourne’s Four Pillars Gin (Robb Report Australia, October 2016) and the founder and director of drinks-focused PR firm Liquid Ideas.

A buzz began to build around an unlikely new hotspot for spirits: Tasmania. Men like Bill Lark (Lark Distillery) and Patrick Maguire (Sullivans Cove) were making whisky that was beating all comers – including the Scots – in international spirits competitions. The island’s outrageous abundance of natural ingredients continues to inspire, and today there are 25 whisky and 12 gin distilleries registered with the Tasmanian Whisky Academy.

The academy’s director, Anne Gigney, began running introductory courses to whisky distilling in 2016. She has sold out every one.
“Eighty-five per cent of people are coming from the mainland, so it’s not just a Tasmanian thing, and nor is it just a whisky thing. There is a sizeable explosion of gin makers, too,” says Gigney (below). “Anecdotally, only about 10 per cent of the people who complete our course will go on to open a distillery. A lot of people come to us in a period of transition. We try to provide a very realistic expectation. We tell them that owning your own distillery is not straightforward; there’s a lot of compliance issues, big overheads and an awful lot of knowledge that you need.”

Taxation is one of the highest hurdles to clear. According to Gregor, Australia imposes the highest taxes on liquor of any Western democracy. “That didn’t seem to matter much back when it only really applied to spirits imported by multinational companies. But applying the same tax to small, independent local producers makes it really hard for Aussies to make a go of it,” he says.

Only the very passionate need apply for a career in distilling spirits, he says. “We have an incredible selection of ingredients available, we’ve also got great water and people who care about making a quality product. They’re not interested in making a quick buck. Because in Australia, you just can’t.” Not only are we producing more local whisky, rum, gin and vodka than ever before, we’re doing it with uniquely Australian ingenuity, Gigney says. “What we’re seeing is only the tip of the iceberg. As we go on, we’re going to see some wicked concoctions coming out of craft distilling in Australia. It’s going to be really interesting to see what pops up in the future,” she says.

One to catch her eye is Southern Wild Distillery, based in Devonport in the shadows of the Spirit of Tasmania ferry dock. There, former food scientist George Burgess has been busy sourcing ingredients from local farmers to produce a distinctive trio of gins. One is infused with wakame seaweed, obtained by divers directly from the seabed off northwest Tasmania.

“It lends a great story about provenance and a wonderful connection to place,” Gigney says. “It’s clever how he has been able to identify a gap, and and I think we’ll see a lot more of that.” It’s appropriate to start in Tasmania, where the likes of Sullivans Cove – which was voted the world’s best single malt at the 2014 World Whisky Awards – Lark Distillery and Nant are deservedly pillars of the industry. The tiny Belgrove operation produces an intriguingly different rye whiskey, family-run McHenry hand-makes single malts of spectacular quality, while Heartwood purchases and bottles delicious distillations with names like ‘Mediocrity Be Damned’ and ‘Vat Out Of Hell’. Don’t miss Melbourne’s stellar Starward, which just received an injection of funds from international drinks giant Diageo, nor NSW’s consistently fabulous Black Gate Distillery, from the tiny town of Mendooran near Dubbo, while Western Australia’s Limeburners is a regular award winner.

It seems there’s suddenly a gin operation on almost every street corner – and that’s a good thing, because each new one is more inventive and interesting than the last. Pioneers in the space such as The West Winds and Four Pillars keep innovating, too, with the latter’s Bloody Shiraz Gin – featuring gin steeped in the skins of shiraz grapes – an excellent example of left-field thinking. Delicate, skilled composition of native botanicals is evident in dozens of others, from Archie Rose, Hippocampus, Poor Tom’s and Canberra Distillery, among many others. If you’re feeling adventurous, get into Angry Ant Gin from Bass & Flinders Distillery – with added ant pheromone – or Husk Distillers’ Ink Gin, using a rare flowering legume from Thailand mixed with Australian ‘bush tucker’ botanicals to create a vivid blue liquid. As with whisky, Tasmania takes the lead when it comes to vodka, thanks largely to one of the world’s purest water supplies. Leveraging this image for purity is 666 Pure Vodka, which includes among its range the world’s first butter-flavoured vodka, plus vodka infused with St Ali coffee. Doing things a bit differently is sheep farmer and cheesemaker Ryan Hartshorn, whose Hartshorn Distillery produces tiny batches of vodka fermented from the whey left over from production of sheep’s milk cheese. Or there’s Sydney’s Small Mouth Distillery, producing vodka that’s been distilled an amazing nine times.

Startlingly good rum from an unexpected quarter is Hoochery, the distillery established all the way back in 1995 by Raymond ‘Spike’ Dessert III in the Kimberley region of Western Australia. The straight-talking American expat promises “no gimmicks, just bloody good, dinky-di Kimberley spirit”. In Sydney, Cargo Cult spiced rum has carved out a cult following, and don’t discount the bear – some of the high-end distillations from Bundaberg’s Master Distillers Collection are complex and delicious, with the awards to back it up.