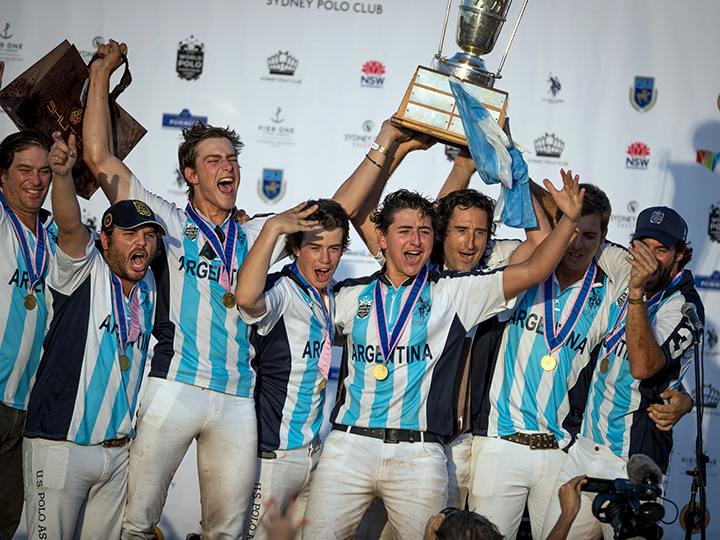 Argentina wins World Polo Championship in Sydney in a thriller

A thrilling finish in the gold medal game capped a week-long celebration of polo.

The World Polo Championship ended in dramatic fashion at the Sydney Polo Club on Sunday afternoon as Argentina claimed its third world title via an overtime goal over arch-rival Chile.

With one second remaining in the final chukka of regular time, Lucio Fernandez Ocampo scored a goal to level the scores and deny Chile outright victory, then Ocampo scored the golden goal in overtime that sealed the match and the title in Argentina’s favour, eight goals to seven. Chile could at least claim the goal of the tournament, when playmaker Andres Vidal launched an audacious shot on goal from 110 metres away that split the posts, putting his side ahead with less than a minute to go in the match, only to be denied by Ocampo’s subsequent heroics. The earlier consolation final for the bronze medal was also a thriller, with an overtime victory for England over USA, 6-5. In similar scenes to that which would play out later in the final, England captain Sathnam Dhillon made amends for his part in an earlier error that had gifted the US a goal by knocking in the leveller. With an extra chukka awarded, a foul by the US presented England’s Peter Webb with a penalty shot, resulting in easy conversion and victory. Ironically, the Australian team had convincingly defeated the Argentinian team nine goals to 5½ on Saturday, but an earlier 7-5 loss to the USA and a tight 10-9 victory over Spain counted against the home side.

The two finals were the culmination of a week-long event at the Sydney Polo Club in Richmond, NSW, which included equine education sessions, an art exhibition, show jumping and dressage, fashions on the field and plenty of social opportunities on the sidelines.