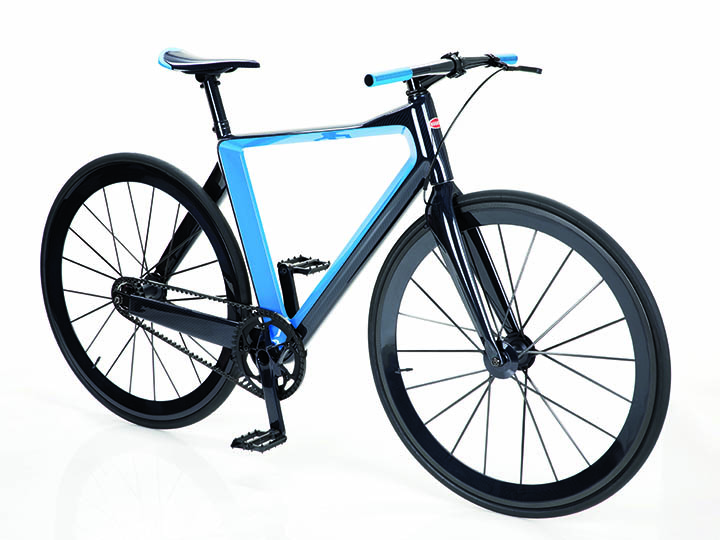 A very special bike with ‘Bugattitude’

Prices start just under $50,000 but as every supercar aficionado knows, if you want a Bugatti, you’ll be sure to order one like no other.

It weighs less than five kilograms, claimed as an all-time record for a “special urban bike”. And with prices starting at €35,000, or just under $A50,000, Bugatti’s first-ever bicycle gives a few other records a pretty good shake, too. And, as every supercar aficionado knows, the starting price is for something no one ever buys. If you want a Bugatti, you’ll be sure to order a Bug like no other.

“The very first customer was from Australia,” Bugatti Automobiles board member Dr Stefan Brungs told us, at the bike’s unveiling during the Geneva Motor Show. “He flew all the way [to Europe] to configure the bike. The bike that he configured was over €100,000 ($A141,425).”

The Australian customer was able to reach that peak because every aspect is customisable. The example we inspected in Geneva was parked next to a gleaming new 420km/h Chiron road car, and was tailored to match it exactly, with translucent two-tone paint exposing the carbon-fibre underneath (as per the Chiron bodywork) and the same stitching as the car’s interior on its ‘Bugatti blue’ leather handgrips and seat.

Mere fingertips were needed to lift it. Ninety-five per cent of the entire machine is made from carbon-fibre, and the unusual scissor design at the rear makes do with a single seat stay and chain stay.

Dr Brungs said to create the two-wheeled Bugatti, the company chose to work with Germany’s PG, “the most advanced and prestigious bike company in the world”.

The result is made in Germany and production is limited to 667 units. That’s 167 more than the Chiron, which went to its first buyer after the Geneva Motor Show in March at about €2.7 million ($A3.8 million), plus taxes.