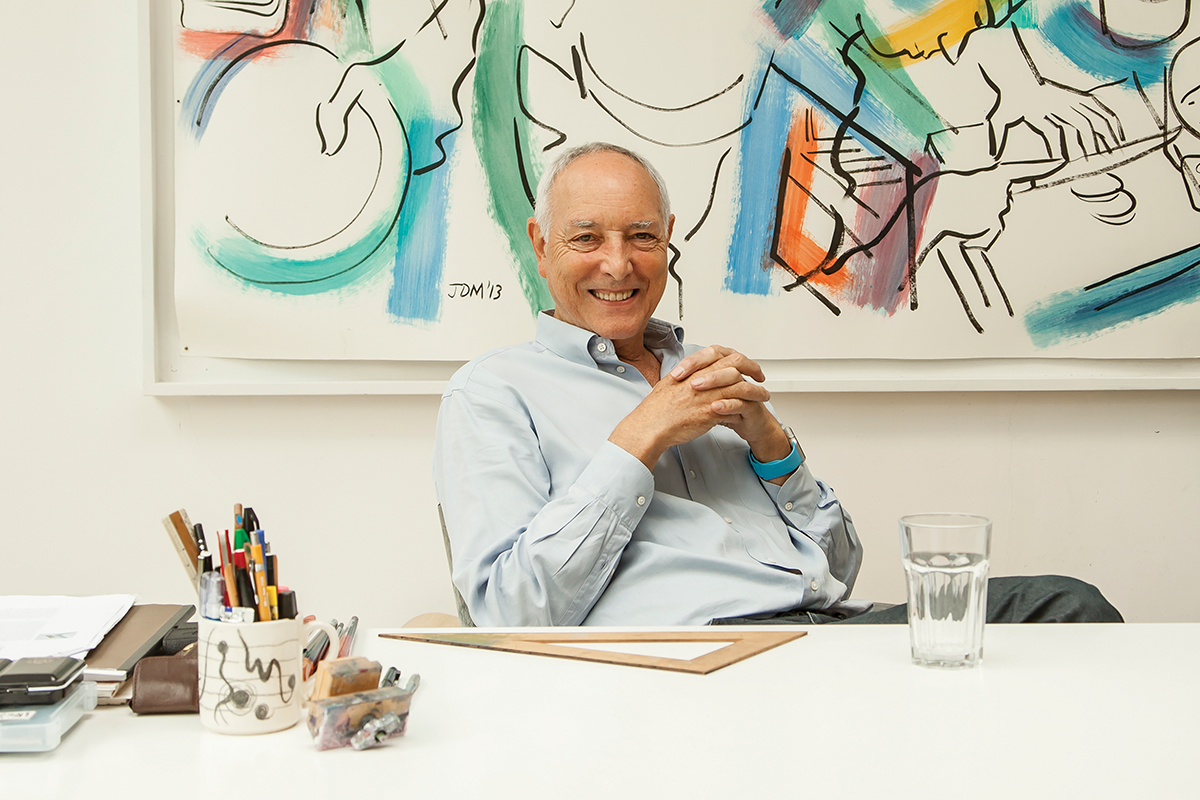 We scale new heights with the man behind Crown’s One Barangaroo as he opens up about the legacy of Sydney’s ‘inhabited sculpture’.

Crown’s One Barangaroo will forever change the drab Sydney skyline—while further elevating notions of luxury living. Acclaimed international architect Chris Wilkinson – of WilkinsonEyre and the man responsible for the project – opens up about the impressive legacy project he labels an ‘inhabited sculpture’.

Robb Report: A very broad question, granted, but in your opinion, what are the fundamentals of good architecture?

Chris Wilkinson: I would say that there are several important factors. A building in context is very important. I really don’t like the idea of having a design for a building and then finding a site for it. You start with the site and then you work from there. Linked to that is the whole ‘placemaking’ situation where you’re trying to create interesting places to visit, and the architecture is part of that. I’m also interested in both art and science; technology and innovation are very important. I like the idea of using the latest technology in architecture, and looking at ways to make something interesting out of it.

RR: It’s impossible to match the pace of new technology, though…

CW: Technology is, of course, moving at a pace, yes. But I do think, on the whole, it’s for the better, rather than anything else, because we can do things that we couldn’t have dreamt of before. Of course, we’re building at Barangaroo now, but it would have been very difficult 10 years ago because of the way they manufacture systems, construction methods… they have all evolved.

RR: Before we enter into a detailed discussion about that specific build, what do you make of Sydney’s cityscape in general?

CW: Like all cities, there’s good and bad. There’s some brilliant buildings in Sydney, but I suppose, when you look at the centre, the skyline, you’re seeing a lot of buildings from the 1960s. I’m not saying they’re bad, but they’re of their time. I do think there are some fantastic modern buildings, like Finger Wharf in Woolloomooloo, where things evolve—they’ve been updated and sensitively done. What’s interesting is that Sydney has got great aspirations. That’s what’s exciting for us, because I think there are aspirations to create some beautiful buildings, and some beautiful places to visit. So Sydney, it’s already great, but it’s going to evolve more. It’s a world destination, but it could get better.

RR: There’s one Sydney building that’s caused some recent consternation—the Sirius building in The Rocks. Due to a focused and loud public outcry, original plans to level this brutalist structure have recently been rescinded, and future proposals now involve preservation and refurbishment. What are your thoughts on the original design? Would you want to demolish such a building?

CW: I think it’s a building you must keep—it’s of its time and we need to keep that, we need to keep the story of how it was. It’s really like the Barbican in London—
it’s brutalist and all, but it’s also very strong and has a big impact. 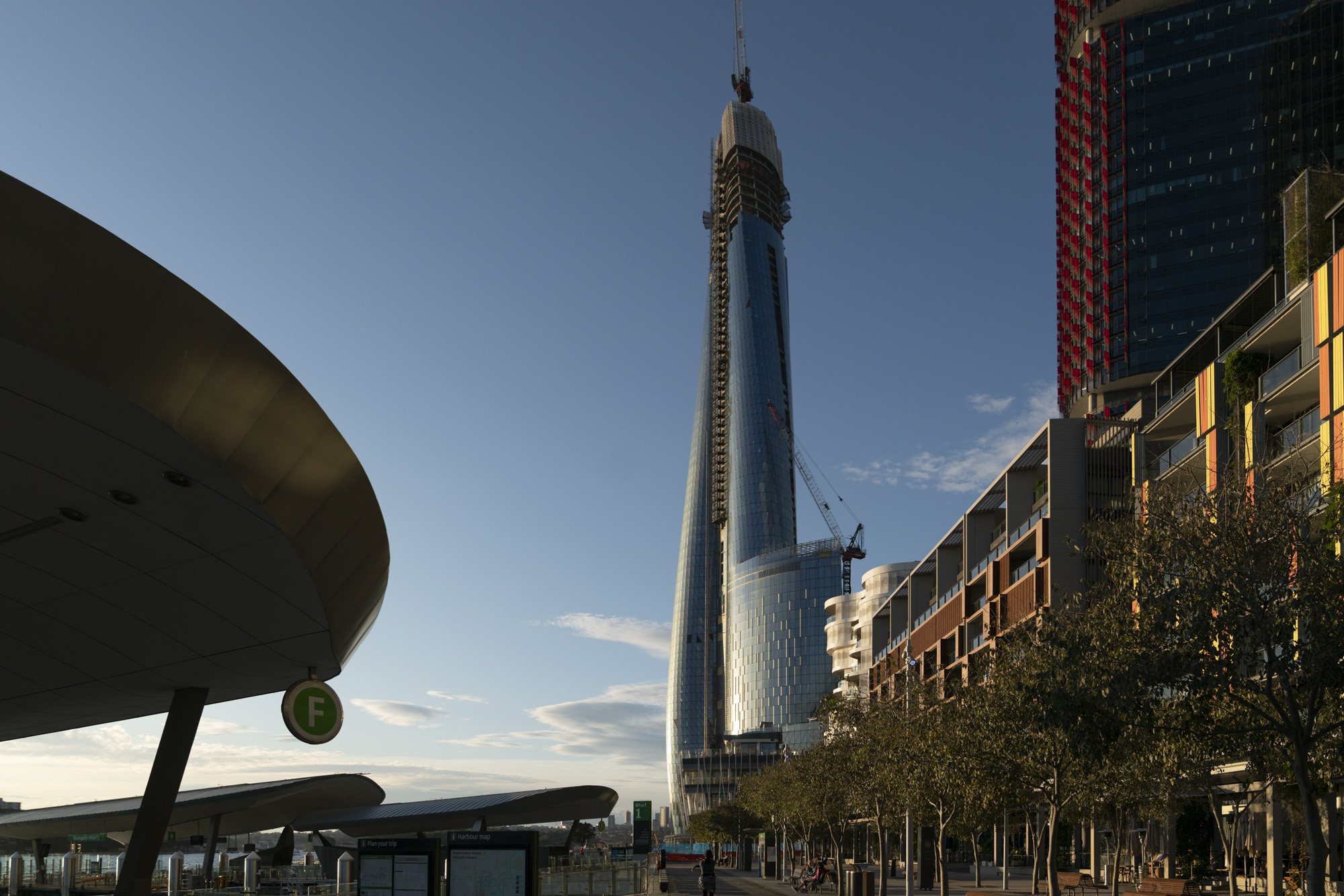 RR: One Barangaroo sits not too far from the Sirius building, and is another project set to make its mark on the city. This is an ambitious build. Was it always part of the plan to go big or go home, so to speak?

CW: Well, the brief was extremely detailed. We knew exactly how much accommodation and how many rooms—which is good, because if you’ve got all the facts you can start working on it. And then there was a mid-term interview, which was a really helpful way of doing things. At that stage, you’re throwing ideas around—and in this instance we had a very positive conversation. And then when we went into the final stage, the last six weeks, we were able to develop our ideas, meaning we began the build with some confidence.

RR: Can you talk us through the design inspiration for the tower.

CW: I always had a feeling that the site needed a sculptural building. And I went into the final presentation saying that we wanted to design an inhabited sculpture, which is quite a strong thing to suggest. There were these sketches that came from a competition that I entered with my wife and son, and among them was an idea for three petals twisting as they rise up… I was looking for something completely new and it just looked exciting to me.

RR: There’s a notion of architecture being the bridge between art and science. How much does art influence your approach to architectural design?

CW: I’m a bit mixed. I sit on the art side, but then, as I said earlier, I’m also very interested in technology and the engineering aspects of buildings.

I started painting when my wife went to art school as a mature student. I began drawing and then moved more into abstract painting. But it’s very difficult. It took me a long time to get anywhere, so I carried on drawing in my normal ways in architecture. When I draw I’m the architect, and when I’m painting I’m more of an artist. But my approach to architecture has been opened up by the work I was doing as an artist. It gave me a certain liberty and confidence, and now I feel like I’m more prepared to take risks and push things as far as we can. Whereas in studying architecture, there’s an obligation for the buildings to ‘perform’. Of course, they always have to perform, but it’s a matter of how you approach it. 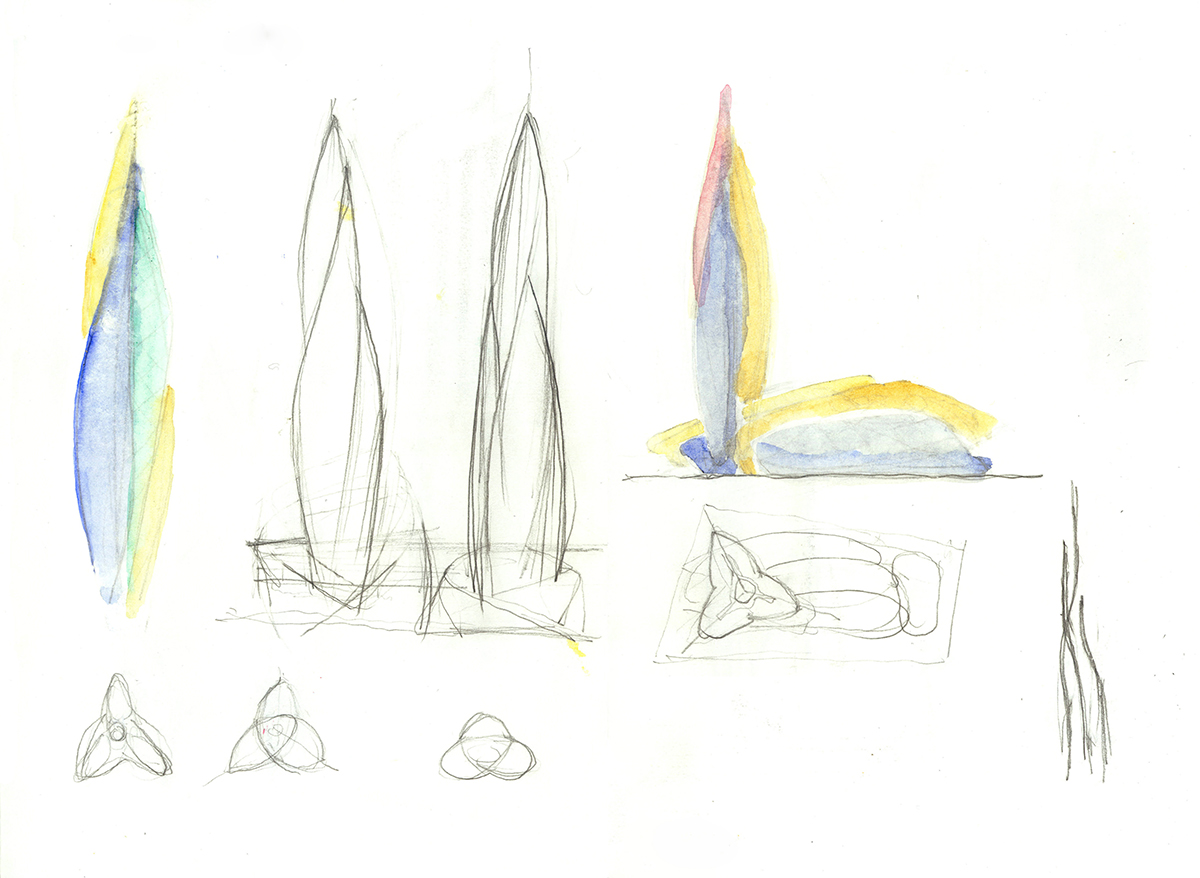 RR: Back to the design of One Barangaroo. Ever since you won the competition in 2013 and plans for the site were made public, there have been loud criticisms regarding the proposed height. Do you think those attitudes have changed now that people can see the building at its tallest and because, well, we’re seven years on?

CW: The politics of height is the same in almost every city actually, where there’s a reluctance to allow tall buildings. But the reality is, when it’s a cosmopolitan city, which is expanding in many places, you’re only going to end with a bit of a sprawl, or you densify the centre and go up. Of course, there are implications for densifying the centre, but I think Sydney is spread out enough. The idea of going off and densifying the suburbs doesn’t seem right to me because you tend to lose the power of the city. And in the Sydney CBD, there were a lot of buildings of a certain period… there was an opportunity to replace them, which is exactly what’s happening now with taller buildings.

RR: Ultimately, One Barangaroo is set to define the Sydney skyline. It’s likely to become a symbol, one that enters the culture of the destination. Do you think that the idea of buildings as ‘cultural capital’ has altered the way architects think about designing structures such as this?

CW: I’d say yes, but for the better. Because when you go to a city, your reactions are related to the architecture and the spaces around it. So why wouldn’t you want it to be good architecture and interesting—it’s a logical thing. 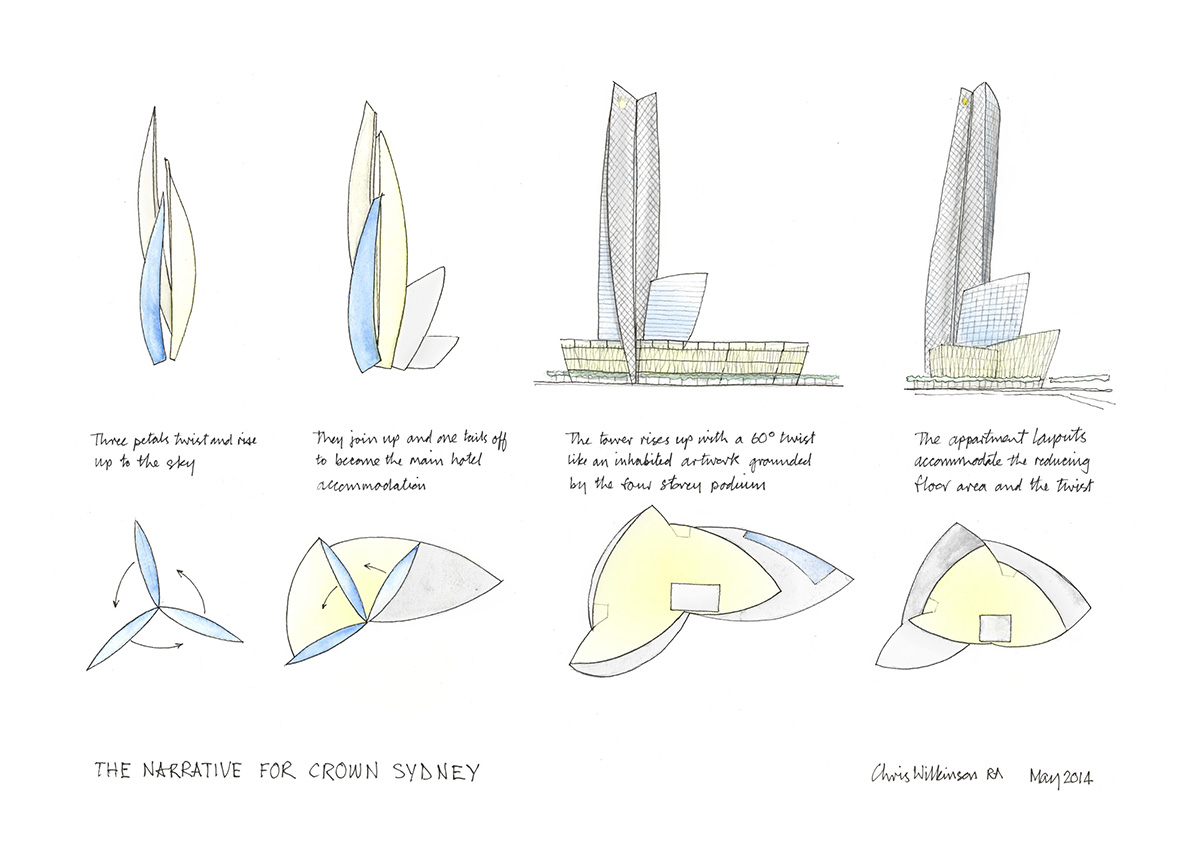 RR: The One Barangaroo tower is also an intrinsic part of Sydney’s urban regeneration, isn’t it?

CW: Absolutely. Often these post-industrial areas suddenly become popular and fashionable places—but to transform them you have to get it right. We’ve been working in Kings Cross and on Battersea Power Station in London, both urban regeneration projects, and there is a kind of pre-requisite to make them interesting and attractive without them being superficial. Kings Cross was a no-go area 15 to 20 years ago. Now it’s one of the most popular places in London. That’s all about the mix of uses and the quality of the public spaces as well as the architecture.

RR: Is an eco-conscious approach now key to design and what’s delivered?

CW: It is a chance to innovate, it really is. And it’s a most important subject on our agenda. We’ve done some projects which are really fundamental to it. [Singapore’s] Gardens by the Bay, for instance, is all about climate and the effects of climate change. What we’ve done there is build two artificial environments. We created a Mediterranean climate, which is an endangered climate, and a ‘cool moist’ climate, which is a mountain climate. Very few places in the world get both, and we’ve recreated those under a glass dome. Most of the energy is created on site, so it’s not like we’re stripping the grid to make this. We proved that you can do it. In the worst situations, we may need to have an artificial environment one day. Architecturally, we’re conscious of the want and pursuit of sustainability, and believe that we’ve been at the forefront of that. I believe that the only way we are going to fix the problems of the future is through technology. You could build a house with straw bales, and it would be sufficient, but you can’t build a central office building with the material—the only way you can build an office is through technology. And this is where we’re going to progress, through all the new ideas that go into how we can create sustainable buildings. It really is the most important thing. And everyone needs to look at it.

RR: We’ve recently seen One Barangaroo ‘top out’. What’s it like to near completion on a project such as this?

CW: It’s fantastic, especially as the quality is exactly what we were hoping for. There are things that are quite difficult to determine in one’s mind, like how the architectural twist would manifest itself. But we recently had lunch on the waterfront in the Harbour and you really see that edge and the curve, and it’s looking really exciting to me. I’m staying at a hotel overlooking the building, and it’s amazing to see it going up. It would be hell if it wasn’t what one was expecting. But it’s exactly what we were hoping for.

RR: And what do you hope its legacy will be 25 years from now?

Crown Sydney One Barangaroo will open in December 2020, with a planned 349-room hotel, 14 restaurants and bars, and selected retail outlets. Crown Residences, located on the upper levels, are set to become habitable during the first half of 2021. onebarangaroo.com.au