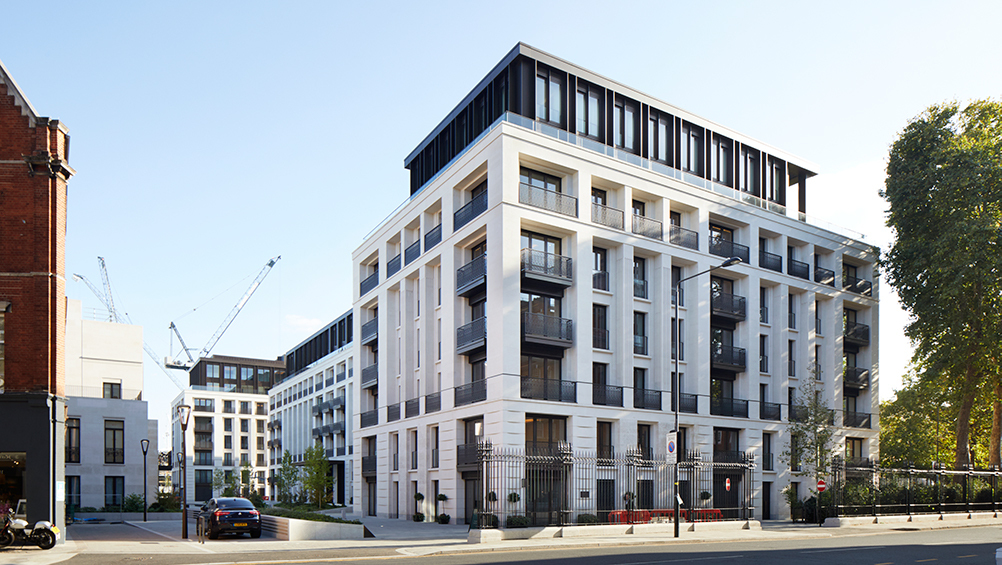 After a little bit of Royal interference, the first penthouse was unveiled.

Rome wasn’t built in a day and all that, but London’s Chelsea Barracks really took its sweet time. After nearly thirteen years, the development’s first penthouse has finally listed for $83 million.

Located atop the Nine Whistler Square building, the two-story residence’s lofty asking makes it among the city’s priciest penthouses. The 570-square-metre interior was designed by Lawson Robb in a modern-meets-Georgian style that mirrors the building’s architecture and that of the surrounding neighbourhood. Cabinets and floors are solid oak; marble, finished by Italian stone artisans, is used for the stairwell and the kitchen; and the bronze balustrades on the balcony are bespoke designs inspired by the botanical prints of textile designer William Morris. The six-bed, seven-bath home also has an impressive, 270-sqm, wrap-around terrace, with panoramic views of the city.

Accessible via elevator is The Garrison Club, a residents-only common space with private access to a 1184-square-metre spa, a 16-seat cinema, a 20-metre swimming pool, a game room and a lounge.

The kitchen. Photography by Alexander James

Penthouse living will also put residents smack in the middle of Chelsea Barracks, which sits between the Westminster and Chelsea areas of London. The affluent new neighbourhood has seven garden squares worked into its layout, which includes other residential buildings and townhouses aplenty, plus a restored 19th-century chapel.

The staircase that connects the duplex. Photography by Alexander James

So what was the hold up? It turns out to be something of a royal one. Developer Qatari Diar paid $1.9 billion for the 13 acres of Chelsea Barracks land back in 2007, making it the most expensive land sale in the UK. Do the math and that comes out to $146 million per acre, so it follows that the homes, gardens and common areas built there would be carefully thought out. The real wrench in the gears seems to be when Prince Charles saw the original, modernist design plans in 2009, and subsequently wrote Qatar’s prime minister that his “heart sank” upon seeing them. One complicated but thoughtful redesign later, and we have the Chelsea Barracks of today—a modern take, but one that also incorporates historic design elements.

Prices for a two-bedroom are around $10.2 million, while three bedrooms are listing for $16.6 million. We’d advise acting sooner rather than later if you’re keen, as 80 per cent of the first batch of homes on the market have already been sold.

On the fence? You can check out more photos of the Nine Whistler Square penthouse below.