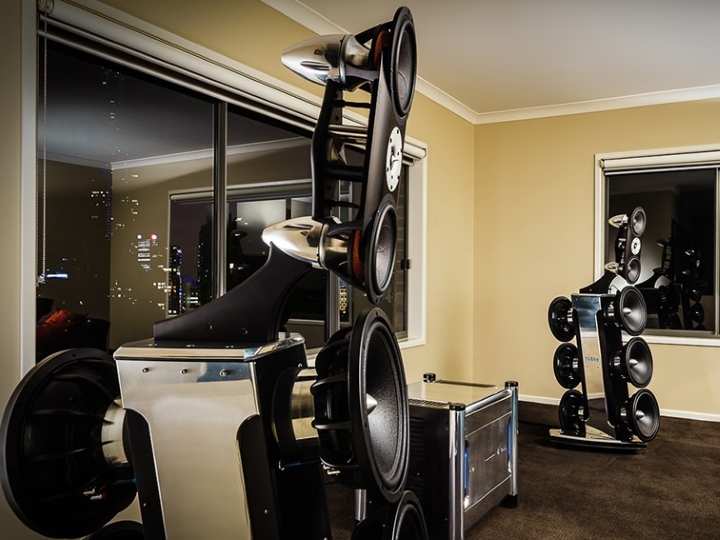 Ten speakers for your home that cost more than a Ferrari

When audio designers are freed from constraints, this is what results as they explore the outer limits of what is possible in speaker design.

One can be forgiven for wondering what could possibly justify the price tag on a loudspeaker that costs as much as a supercar. When audio designers are freed from the constraints of budget or price point, they begin to explore the outer limits of what is possible in speaker design. Use of rare materials, labour-intensive manufacturing, and compelling styling results in truly extraordinary products. Some weigh several tons, others reach greater than 2.5 metres in height, and all have ultimate sound reproduction in common. Below are 10 great examples of what happens when audio manufacturers are limited only by their imagination and the material world.

Feast your eyes on these exclusive audio titans that very few ears have heard. If you have an extra quarter-of-a-million dollars lying around and are in the market for a three-way loudspeaker with serious bass presence, the Raidho D-5.1 is your best bet. These powerful towers sport four diamond bass drivers (featuring a layer of synthetic diamond on the cone), two diamond mid-range drivers, and a ribbon tweeter, all oriented at filling a room with powerful yet non-fatiguing sound. Standing nearly two metres tall and weighing 163 kilograms per loudspeaker, the massive D-5.1 can be purchased with black or walnut burl housing ($US225,000 or $US250,000, or about $A297,000 to $A330,000, respectively) from select Raidho dealers worldwide. (raidho.dk) Standing two metres tall and weighing in at about 200 kilograms apiece, the Force speakers from Perfect8 are like nothing else on the market, both visually and sonically. A complete set includes two of the iconic glass towers — each flanked by a gold-accented column housing ribbon tweeters — that rise above their four similarly glass-encased subwoofers. The tower’s tweeters are renowned for reproducing high frequencies with revealing clarity, and the mid-range drivers perform their tasks with equal aplomb. If you want to add these to your living room setup, be prepared to shell out $US566,000 (or about $A748,000). (perfect8.com) These speakers don’t just take cues from a modern design — they embody it. The Kyron Audio Gaia is one of the most extraordinary open-baffle loudspeaker designs on the market. These artistic creations each contain six woofers, two mid-range drivers, and two tweeters, all of which feature open-baffle architecture for a wide, enveloping soundstage. Conveniently, the loudspeakers include power amplification within their housing, meaning they only require a source to play. The Gaia has won best-in-show awards at a variety of audio events, but such highly acclaimed quality comes with a steep price: about $US250,000 (or about $A330,000). (kyronaudio.com.au) The most recent ultra-high-end model on this list, the Wilson Audio WAMM Master Chronosonic was first announced just a few months ago. The $US685,000 (or about $A904,000) flagship is company founder Dave Wilson’s magnum opus after more than 40 years in business. The popularity and stellar reputation of the Wilson Audio brand has set high expectations for the Chronosonic, which sports nine drivers, five of which are adjustable. Wilson’s approach to audio is about “time coherence,” meaning each driver must be tuned to the unique room acoustics given the speaker’s placement to ensure the sound waves reach the ear precisely at the correct moment. Those lucky enough to purchase one of the masterpieces — limited to just 70 examples — will begin his or her new sonic journey with a trip to Utah to experience the Wilson factory in person. (wilsonaudio.com) According to the German father-and-son team behind Burkhardtsmaier, the emotion of music is conveyed in the inaudible overtones. It is this philosophy that guides the design of the company’s extraordinary loudspeakers, whose entire construction is milled from blocks of aluminum. The surface of the Burkhardtsmaier BB-08 is highly polished, so it reflects the environment around it, allowing it to integrate seamlessly into a room without visually overpowering the space. Burkhardtsmaier is a fairly recent entrant to the market, although the elder Burkhardtsmaier, Berthold, is an industry veteran, having previously worked as an engineer for JBL and Shure. Buyers interested in the BB-08 should be prepared to spend at least $US356,000 (or about $A470,000). (burkhardtsmaier.de) It is difficult to know where to begin to describe something as exclusive as the TIDAL Audio La Assoluta. The $US550,000 (or about $A726,000) masterpiece boasts 54 carats of pure diamond diaphragm surface area, a 3 mm thick lacquer coat that requires about 60 hours of polishing time, and only five pairs are produced a year. The highly efficient La Assoluta loudspeakers stand nearly 2.5 metres tall, and weigh a combined 971 kilograms. The incredible rigidity of the diamond drivers allows for exceptional sound reproduction with no flaws, and the baskets of these custom drivers are machined from a solid block of aluminum, providing a solid position from which radiates clean, pure sound. (tidal-audio.com) Like most of the Marten loudspeaker line, the Coltrane Supreme 2 is named after a world-renowned jazz artist. And as befits its namesake, the Supreme 2 is an exercise in sonic transcendence. The contrast of the wood tones with the white or gray Accuton Cell Technology drivers lends the piece the signature Marten look. Its diamond tweeters and supertweeters provide a delicate yet forceful take on the sound and allow for exacting detail and a superb mid-range. The Coltrane Supreme 2 retails for $US400,000 (or about $A528,000) and stands nearly 2.15 metres tall and weighs in at more than 225 kilograms. (marten.se) The Focal Grande Utopia EM models are some of the most famous ultra-high-end loudspeakers produced in recent years. This is due in part to the unit’s iconic accordion shape, which allows for exact tuning to the listener’s room. The French company’s design incorporates cutting-edge technology in the form of an electromagnet in the 16-inch woofer that applies an estimated 1.75 teslas of magnetic force with extreme precision — enhancing the loudspeakers’ famously exceptional bass reproduction. The speakers retail for $US180,000 (or about $A237,000) and are available from Focal dealers worldwide. (focal.com) At some point, one simply runs out of words in the English language to describe such epic creations, so it seems appropriate that Magico succinctly summed up its $US600,000 (or about $A792,000), half-ton per loudspeaker — which represents some of the most extraordinary engineering the US company has ever produced — with the simple name Ultimate. The five-way speaker contains four horns and a 15-inch woofer powered by a 4000-watt amplifier. A pair of Ultimates are ideally suited for a room 377 to 1,615 square feet in size, but it might require some extra floor support for the 900 kilograms of added weight. (magico.net) The famed Swiss purveyor of luxury audio at Goldmund is well known for its iconic products, especially the Apologue loudspeaker, which won a number of design awards upon its release in 1987 and was even displayed in New York’s Museum of Modern Art. The latest iteration, the Goldmund Apologue Anniversary, replicates that classic design, while including modern technologies like active amplification and additional drivers. Each speaker is wireless, eliminating the need for unsightly cables. The new edition ($US500,000, or about $A660,000) is limited in production to 25 pairs and comes in a variety of color customisation options, which can be tested out on Goldmund’s interactive web page. (goldmund.com)