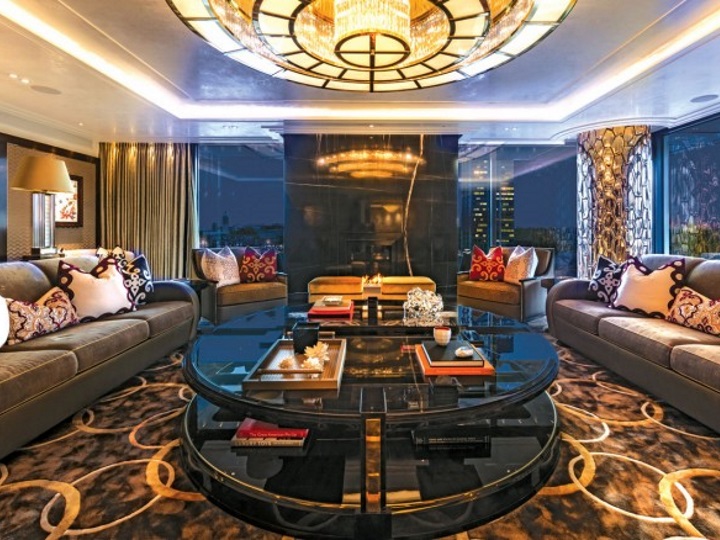 Take a peek inside a bespoke London penthouse In an interview some years before his passing in 2015, John Maxtone-Graham, author of _Normandie: France's Legendary Art Deco Ocean Liner,_ described the mythic vessel as "the quintessential ocean liner: beautiful, fast, huge interiors (the like of which have never been duplicated), [with] stunning décor."

That ship is long gone, yet something of its extravagantly elegant spirit permeates Winch Design's scheme for this 700-square-metre, four-bedroom penthouse in Knightsbridge, London. And indeed, explains head of architecture, Simon Tomlinson, inspiration was at least partially nautical.

"The clients had stayed on board one of our yachts previously and were clear about creating an interior that was both deco-inspired and dramatic in terms of colour." Case in point: The formal lounge, with its bespoke crystal ceiling fixture by Dernier & Hamlyn grand enough for a ship's ballroom, resembles a yacht's chic saloon.

Winch designed the two-part lacquer coffee table below "to work harmoniously with the chandelier," says Tomlinson, by mirroring the fixture's size and shape. Plush furnishings, including silk-velvet-covered sofas and club chairs on a silk Oliver Treutlein carpet, exude a mellow shimmer.

"The decision to wrap the structural concrete columns along the Hyde Park view with curved, interlocking glass tiles was an instance where we turned a negative into a feature of the design," adds Tomlinson. The entry and hallway dazzle guests with opulent surfaces, clean lines, bespoke furnishings, and art. This space, says Tomlinson, "was designed as a generous processional route through the apartment. We encouraged the clients to view it as a gallery for displaying their artwork."

The foyer's marble panel of orchids by Marc Quinn is breathtaking, especially when lit by 96 etched-glass cylinders commissioned from the Czech firm Crystal Caviar.

The circular pattern of a floor of white statuario and Noir Saint Laurent marbles is echoed in sycamore inlays of a Ruhlmann-like Macassar ebony chest designed by the Winch team, which included Tomlinson, as well as principal Andrew Winch and interiors experts Selina McCabe and Alex Hutchison.

At the end of the corridor leading to private quarters is a work by minimalist painter Tadaaki Kuwayama. Its eye-catching hue can be found in other spaces in the home, from the family room's coffee table to lampshades and seating. For various spaces, the Winch Design team took a page from deco masters such as René Lalique, Jean Dupas (both of whom produced decorative elements for the Normandie), and Edgar Brandt, creating stylised wall panels of jesmonite, a luminous gypsum-based material.

The one in an intimate piano suite adjacent to the formal lounge sports deer and birds amidst tropical foliage. The room is often used as "a secondary lounge for large family gatherings," says Tomlinson.

The geometric-patterned ceiling fixture presiding over the room is another custom design. The room is panelled in black American walnut trimmed with polished nickel and laser etched with "a leaf pattern to reference the trees of the park beyond," he says.

The team set an Yves Klein gold leaf–filled coffee table in a deco-inspired frame. Above the sofa hangs an embroidered Raqib Shaw work acquired from White Cube Bermondsey. And the custom piano, made by Paris-based Pleyel, features ring patterns that relate to the floor motif in this room as well as the overlapping circles of the silk carpet in the formal lounge. The owners, a fortysomething professional couple with two preteens, entertain lavishly, which made a dining table that comfortably seats 18 a necessity rather than an extravagance.

It is a custom piece of black walnut with gold-leafed wood rib detailing on its perimeter, and its chairs feature an embroidered motif on their backs "inspired by a prominent deco pattern."

The arrangement of the room models the art deco emphasis on symmetry. Prague-based Lasvit created the spectacular chandelier overhead. Credenzas of Macassar ebony with brass inlay, also bespoke, are crowned with slabs of Portoro gold marble.

The whole room is wrapped in an eglomise treatment that resembles guilloche, popularised by the French jeweller Fabergé. Against this, another jesmonite panel strongly recalls the famous L'Oasis screen of iron and brass created by deco metal master Edgar Brandt in 1924 for the Exposition Internationale des Arts Décoratifs et Industriels Modernes.

All in the family The firm reconfigured the apartment's layout so all the public rooms, including the family room, would face Hyde Park. "From time to time it is used as a workspace," explains Tomlinson of the room. "However, most of the time it's used for family lunches and evening get-togethers."

Satinwood applied in a straw-marquetry fan pattern graces the face of the credenza, atop which a pair of Raisins lamps from Lalique flank a quartet of plates designed by Pablo Picasso. Tomlinson and his colleagues nestled the master bed in a niche of custom-designed and coloured fabric from Humphries Weaving Company, bordered in ruched red velvet.

Below the fireplace's dramatic book-matched marble slabs are sections of fluted wood that has been water gilded in white gold, a detail that also surrounds the bottom half of the structural column.

At the foot of the bed is a customised Talay settee from Amy Somerville. The whole composition rests atop a shimmery silk rug with a subtle deco-inspired fan pattern. The room includes a bath (left) with a vanity made from rippled walnut.

Statuario marble covers the vanity and floor, where Noir Marquina marble inlay creates a tailored look. Collier Webb sconces light the scene. The designers added still another layer of detail with an interlocking etched pattern on the mirror, uniting the room with the pleasing geometric symmetry employed so elegantly throughout the home. (winchdesign.com)