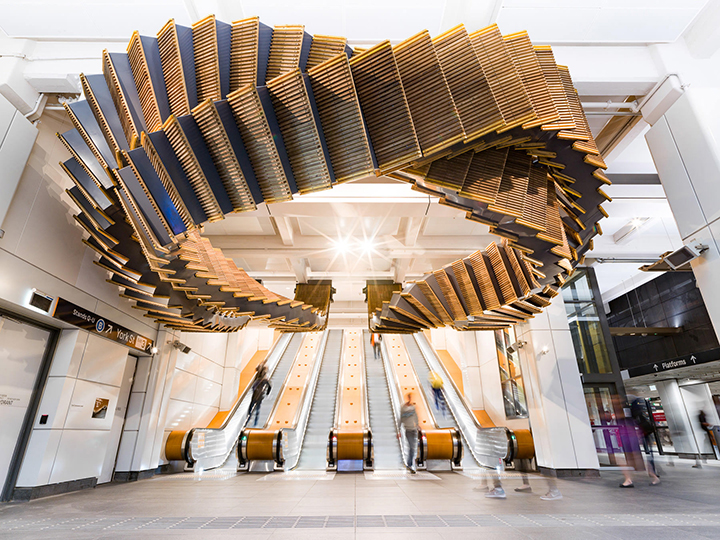 Many lamented the closure of the famous wooden escalators at Wynyard station but their fate was not to be discarded.

Wynyard Station has been undergoing a necessary upgrade for the past few years, but many lamented the closure of the famous wooden escalators.
The bank of four escalators at York Street had been there since 1931 and was a fond, albeit sometimes dangerous, relic of the past.

However, Transport for NSW today unveiled the location of those old elevators, and it’s not the tip as many feared. They are now suspended above commuters in a 50-metre, five-tonne sculpture designed by artist Chris Fox (below). Titled ‘Interloop’, the artwork features 244 wooden treads and four combs from the original escalators. It took him six months to design and engineer and 12 weeks to create with more than a kilometre of welding.

Fox wrote on his website: “The artwork explores the idea that people are stationary on an escalator whilst also travelling, allowing for a moment of pause that occurs mid-motion. The sculpture resonates with people in this state, referencing all those journeys that have passed and are now interlooping back.” In addition, there is now a large photographic mural of the station from 1948 which can be seen above the new escalators at York St.
The response from commuters has been overwhelmingly positive, with many on social media praising the state government and the sculptor, and one person saying it’s the best thing the state has done this decade.