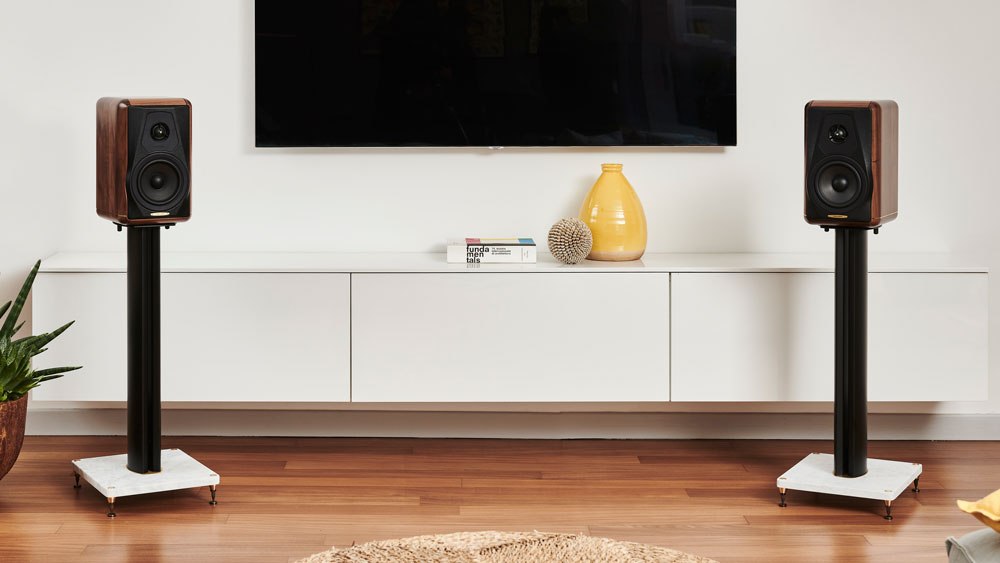 Italian speaker maker Sonus Faber recently celebrated its 35th anniversary with a jewel box of a loudspeaker, one certain to appeal to listeners with a passion for fine woodworking and exceptional sound. Since the company’s founding, beautiful cabinets have been a hallmark of the audio company, whose roots in Italy’s Veneto region draw on centuries of instrument-making tradition by artisans with names like Stradavarius and Guarnari.

A part of the Sonus Faber Heritage Collection, the small Minima Amator II is a modern interpretation of an original design created in 1992, and features luxurious walnut cabinets with front and rear panels covered in rich black leather. Subtle details, like a thin insert of brass at the base, recall the elegant intarsia inlay of a Medici studiolo.

Paolo Tezzon, Sonus Faber’s chief of acoustics, research and development, encountered the company long before he began working there. “I discovered Sonus Faber back in 1990, and totally fell in love with the brand… I was just a teenager. A few years later, as soon as I had enough money saved, I purchased my first pair. So, when we decided to celebrate our 35th anniversary with a speaker inspired by the first-generation monitors, I thought it would be nice to strictly reinterpret that [original] approach, but using today’s transducers and measurement tools.”

To that end, two new drivers have been developed for the Minima Amator II. The tweeter, which extends to a bat-eared 35,000 Hz, employs a 1.1-inch damped silk dome, and incorporates a novel tripod dome guard that was a signature of the original. The 6-inch woofer manages frequencies from 2,500 Hz down to 50 Hz. Developed in Sonus Faber’s Vicenza-based laboratory, it uses a cellulose pulp-and-natural-fibre cone, selected for that material’s ability to render detail with warmth and precision. With a nominal 4 Ohm impedance and 87 dB sensitivity, these speakers play well with integrated amplifiers that deliver between 35 to 150 wpc (watts per channel).

Each speaker is about the size of a generous shoebox and weighs less than 16 pounds. Photo: Courtesy of Sonus Faber.

Complementing the gently rounded corners of the thick wood enclosure and surrounding the two drivers is a complex front baffle with angled edges, thus eliminating dispersion anomalies inherent in many flat-baffle designs. As a bass reflex design, the rear of the cabinet incorporates a bass port, while two pair of substantial brass binding posts make the Minima Amator II suitable for bi-wiring, attesting to its serious performance potential.

Although the Minima Amator II was designed to reside on a bookshelf, most would argue that it’s too exquisite an object to hide there. Serious listeners will definitely opt for the available stands with white Carrera marble bases, which allow the loudspeakers to be positioned at the ideal height and into the room for optimum fidelity and the most accurate musical presentation.

The optional stands, with white Carrera marble bases, allow the loudspeakers to be positioned at the ideal height for optimum fidelity. Photo: Courtesy of Sonus Faber.

About the size of a generous shoebox and weighing in at less than 16 pounds each, the Minima Amator II would be a work of art even without playing music. But music is what they do, rendering smaller-scale classical, jazz, popular vocal and instrumental music with an intimacy and realism for which the best two-way designs are especially well suited. But crank up symphonic, big-band jazz, hard rock or contemporary fare, and the Minimas hold their own with far larger speakers, playing loud and rendering a soundstage with impressive height, width and depth. Bass-hungry listeners may go off in search of a subwoofer, and for those folks, Sonus Faber can plumb the depths with its Gravis series. The Sonus Faber Minima Amator II are priced per pair at around $5,560 or $7600 with Carrera marble bases.