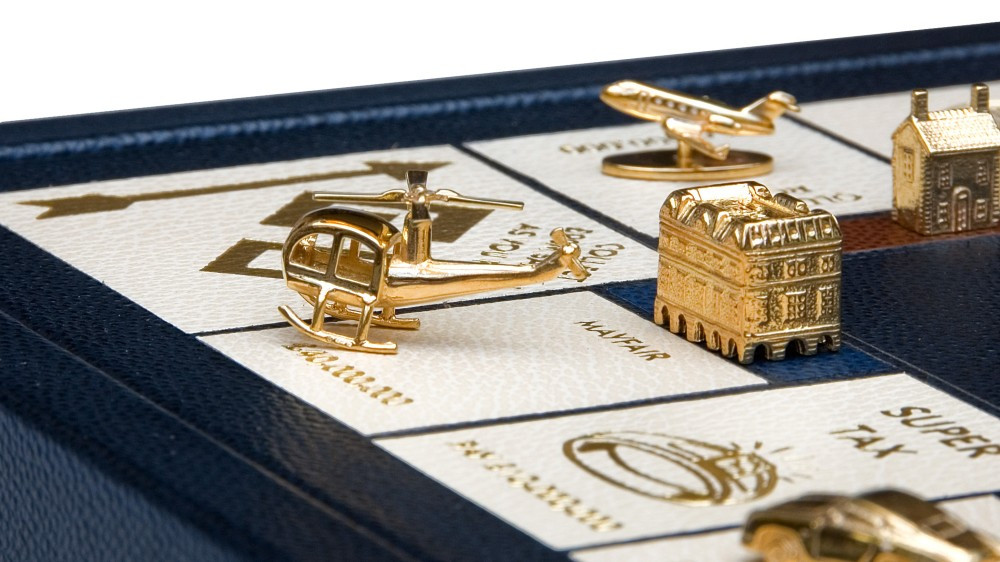 8 Luxury Board Games to Keep You Entertained In Isolation

Own a hotel on Mayfair, and feel like you really own it.

Bespoke games maker Alexandra Llewellyn was first struck by the “language of games” many years ago in Egypt, playing backgammon with a nonagenarian local under the shade of a palm tree. He couldn’t speak English, so they used the theatre of play to communicate with one another—the one thing that bound them was the knowledge of this centuries-old game. She now crafts exquisite board games, art-worthy pieces that are passed on through generations. While lockdown means that chess and backgammon parks across the world are closed, we can still play board games with the family, and why not do it in style? From a bespoke monopoly board to a shagreen Mahjong game and a Baccarat domino set crafted in crystal, we bring you seven alluring games to pass the time during lockdown—and beyond.

Llewellyn crafts bespoke backgammon and poker sets. One current commission is from a son to commemorate his mother’s dairy farm, with images of cows on the backgammon board made in mother of pearl and sycamore. But for lockdown, you can get a handmade board delivered in a week, shipped from the UK. We love the jaunty flamingo design, made for Miami’s Surf Club. Squint and you could almost be sitting under the swaying palms of its Sirenuse bar, stiff martini in hand ($22,500). They also have a useful service: For those who cannot get a board, you can print one of their designs from their website just to play on at home.

Launched in 2008 by South African artist (and daughter of Richemont chairman Johann Rupert), Hanneli Rupert’s online portal highlights the finest African artisanal design. One of the latest launches is the Okapi plain card oracle deck, with the standard 52 cards and two jokers, but made special with hand drawn African deities and animals on each card. Used for card games or tarot, they are works of art in themselves and come in blue, red or green. $211.

Known for their exquisite woodwork and marquetry, from humidors to bespoke cocktail cabinets, Linley has also turned their hands to the not so humble board game. This rather fine all-in-one number contains four different games. This handmade piece comes in a shimmering stained grey ripple sycamore and walnut stringing. On each layer, a choice of two popular games can be played: Scrabble and Trivial Pursuit, Monopoly and Cluedo and Backgammon and Chess. Each game is stained in a different shade of grey, making it easy to differentiate between them. The boards can be bought individually or as a complete set of three stackable boards and six games ($7200).

Harking back to an ancient era of games, Aerin’s two shagreen gems are beautiful to look at and rather intriguing to play. Chinese game Mahjong was established in the Quinq dynasty in the 1600s, and fashionable in Europe in the early 20th century. This upmarket parlour version is resplendent with brass hardware and presented in a shagreen box, and 144 vibrantly engraved tiles ($1945). The lesser-known Mancala dates back to between CE 500 and 700, one of the world’s oldest two-player games. This comes with 48 brass spheres and two ash wood pitted boards ($2300).

Brunello Cucinelli’s Game of the Goose

The king of cashmere knows a thing or two about staying cozy. And these days that means being swaddled in the finest yarns with the family, perhaps playing a board game together around the kitchen table or hearth. Cucinelli has a rather interesting offering, Game of the Goose, one of the earliest commercially produced games. A dice game and easy to play, the first person to reach the 63rd space on the board, wins. This swizzy version is made in Krion and walnut wood ($14,420).

The earliest mention of dominos is from the Song dynasty in China in the 13th century. The game has since evolved, and indeed, the Baccarat version is a long way from the simple wood and stone versions of yore. Designed by Marcel Wanders, this lustrous model is crafted from black crystal, with a box inlaid with marble, and it comes with 28 gilded pieces ($12,750). A haute Go game is also available ($38,000).

You only have to spend the idlest few moments on Instagram to see how jigsaw puzzles have come back into fashion—how else to entertain a locked-down household for hours upon hours? For the ultimate in bespoke, head to Stave puzzles, custom-made versions where each piece is cut by hand. Lose yourself in their Wizard of Oz limited edition ($6500) or escape to an Island Paradise ($1400), brimming with palm trees and crashing waves, even if you are stuck between your four walls.

What may be the ultimate in gifts for retiring CEOs and those celebrating a half-century, these bespoke luxury Monopoly boards can be commissioned with personal details, such as one’s own houses or miniature version of your private jet. Geoffrey Parker crafts handmade games, including poker and chess, in his workshop in the UK. However a bit more down to earth—and easier to reach you in lockdown given the lead time—is the ready-to-buy versions, still super deluxe. The exotic water snake backgammon set is a showstopper (around $9900), or to keep the little ones occupied, how about a Lord of the Rings chess set ($3270).